The Bookshelf: Jasmine and Fire After fleeing a war-torn Lebanon during her childhood and starting a new life in the United States, food and travel writer Salma Abdelnour always dreamed of returning to her homeland. Her poignant book, Jasmine and Fire: A Bittersweet Year in Beirut, chronicles her complicated return to Lebanon and its vibrant food culture. We got in touch with her to learn about her go-to Lebanese restaurants here in New York City, her favorite cuisines around the globe, and what makes Beirut’s food culture so extraordinary.

(Join Salma tomorrow at noon for a special installment of our Beard on Books series at the Beard House.)

JBF: You wrote that when you returned to Beirut and had to come to grips with so many changes in your life, you found solace in Lebanon’s food culture. Can you tell us a bit more about that?

Salma Abdelnour: Food can be a source of comfort and communion just about anywhere, but the Lebanese take it to an extreme—partly because of traditional habits of Arab hospitality that date back centuries, and partly because Lebanon is in such a fertile region, with amazing ingredients and a rich culinary repertoire.

Still, on my first night back in Beirut in the summer of 2010, I was too homesick for New York to even think about food. My aunt took care of that right away. She'd been cooking all day, and the night my flight landed in Beirut, she brought over some of my favorite comfort foods, like rizz w djej, a classic dish of juicy baked chicken over buttery, pine nut–studded rice. Along with that, she fed me her lemony tabbouleh, minty fattoush salad, and warm Arabic bread. I felt so soothed to be surrounded by these dishes that I'd grown up with; they triggered, for me, not just nostalgia but a very tangible sense of being loved and taken care of. Luckily, in Lebanon, you have plenty of chances to be comforted and coddled with food.

In Beirut, you notice the cultural obsession with eating on just about any sidewalk you walk down: you smell the corner ovens baking hot pita bread and za’atar pies, the rotisserie chicken stands char-grilling the juicy birds, the lamb shawarma getting sliced and rolled up into dense and dripping sandwiches, and the freshly roasted coffee wafting out of cafés. Meanwhile, in the small villages around Lebanon, people you've just met will often invite you over for lunch, dinner, or coffee, and insist that you take them up on it. If you're a newcomer to Lebanon, you can get so distracted by the food and the company that you're less likely to feel stranded and lonely—at least not for long.

JBF: Now that you’re back in New York City, do you turn to Lebanese food when you’re homesick? If so, can you tell us some of your favorite spots for great Lebanese?

SA: I do often turn to Lebanese food when I'm homesick. I've always felt that there's not enough great Lebanese food here in New York, and I wish more of us would open restaurants! But I can't get enough of the man'ouche (za’atar pies) at Damascus Bakery on Atlantic Avenue and at Man'ouche in Bay Ridge; the kibbeh nayeh (lamb tartare) at Naya and ilili in Manhattan; the Lebanese-style pistachio ice cream at Cedars in Bay Ridge; the labneh at Sahadi's in Brooklyn Heights; and the kafta sandwiches stuffed with grilled spiced lamb at Karam in Bay Ridge and midtown Manhattan.

JBF: Do you have a favorite recipe that you like to cook for yourself that you feel really embodies Lebanon?

SA: I love making fatteh, a layered dish based around one main ingredient—which could be roasted eggplant, chicken, chickpeas, or spinach—that you top with garlic-spiked yogurt, fried pita croutons, and pine nuts. I like making different variations, and I'm constantly craving its contrast of textures (crunchy and creamy) and temperatures (hot and cold). The dish actually originated in Syria, but Lebanon was once part of Greater Syria before it became an official country in the early 20th century.

JBF: What’s your earliest food memory from your childhood in Beirut?

SA: I remember my grandmother standing at the stove stirring the mouloukhieh, a stew of mallow leaves and chicken that's flavored with cilantro and garlic, served over rice, and topped with a vinegar and onion dressing. I hated it as a kid; it was too green and scary looking. Eventually, when my family was already living in Houston and had left Beirut years before, I fell in love with it and wished my grandmother were around to make it all the time. Since then I've had it in Egypt (where the dish originated) and around Lebanon, and I've been surprised by how different the local variations can be. But that's true of so many dishes in the Middle East. They've made their way around the region, and every country—and often every village or even every family—does them a bit differently.

JBF: What was the biggest challenge about returning to your childhood home after so long?

SA: I feared that the place I'd always thought of as my true home would've changed so much by the time I moved back, that I'd no longer feel at home there. I had to face the possibility that I'd always feel like an outsider, in some sense, everywhere in the world. Beirut wasn't going to be my magical savior after all; or at least that's what kept me up nights. But it's also true that many people feel a sense of chronic displacement, in whatever form that takes—and not just exiles and expats. That doesn't have to be a bad thing; it depends on what impact you allow it to have. Moving back to Lebanon, and writing this book, made me think more deeply about what "home" really means, for myself or for anyone. JBF: Do you think that having been uprooted to an entirely new continent and culture during your childhood has any correlation with the fact that you grew up to be a food and travel writer?

SA: I do think that becoming a food and travel writer had a lot to do with my being uprooted as a child. But oddly enough, my real wanderlust didn't kick in until I was in my 20s. Throughout junior high and high school in Houston, and then in college at Berkeley, I was so focused on getting settled in and feeling comfortable socially, that the thought of uprooting myself again didn't appeal at all. Even in my first few years in New York, I didn't travel much—although I did keep wondering when, and if, I'd ever move back to Beirut. One thing I did do as soon as I landed in New York, or anywhere, was to send myself on food-related adventures, even just in my own neighborhood. So it felt natural to become a food writer, and as soon as my wanderlust hit hard again, I started writing more about travel.

JBF: As a former travel editor for Food & Wine magazine, you must have experienced a lot of incredible food both near and far. Other than Beirut, what are some of your favorite food cities, and why?

SA: Here are just a few:

Tokyo: The unbelievable variety of food experiences you can have in Tokyo, at the high or low end, is something I've never seen anywhere else. Tokyo famously has restaurants dedicated to just one thing: tonkatsu (deep-fried pork cutlet) for instance, or mushrooms, or eel, or yakitori. It's inspiring how much attention is paid to the tiniest details, to the presentation, and to honoring tradition—or innovating brilliantly.

Saigon: When I traveled around Vietnam some years ago, I finally understood why people love pho, the Vietnamese beef and noodle soup. When it's done the right way, with certain herbs that are hard to find in the States, the soup has such a sharp, pungent, and luscious flavor. That goes for many Vietnamese dishes: the herbs there, and the shellfish and pork and so many local specialties, are so vibrant and impossible to truly replicate outside Vietnam. In Saigon, there were lots of street food stands and restaurants I wanted to go back to again and again.

Naples: I love the street vendors that will slice up tripe and various organ meats on right there on a piece of butcher paper, sprinkle the meat with salt, and hand it to you. Not to mention the Neapolitan pizzas, which at first I thought were too soggy compared to New York–style crispy crusts. But then I fell hard for those puffy, charred bubbles on the crust, and the way you have to eat the pizza fast, while it's still hot, and embrace the sauciness and the messiness. In a way, that's true of Naples as a city too: it's not as well-oiled a tourism machine as say Florence or Venice, but there's a ton to discover—and eat! 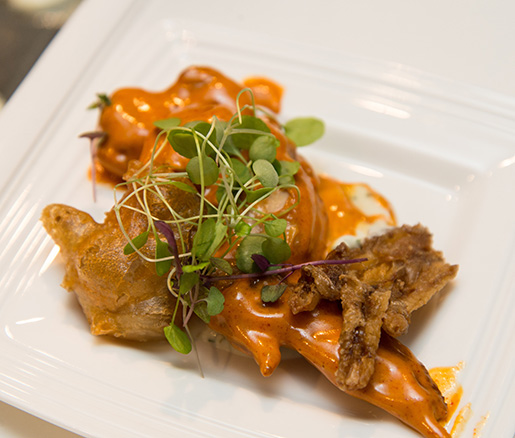