This past weekend the James Beard Foundation’s Taste America® tour landed in Chicago. For the third year in a row, the Foundation has been traveling to ten cities across the country to host one-of-kind fundraising dinners that highlight local cuisine and are headlined by a visiting All-Star chef and a Local Star chef. Each stop on the tour also includes cooking demos, artisanal tastings, and book signings. This was the Foundation’s second major event in Chicago this year, with the prestigious James Beard Awards gala taking place at the Lyric Opera of Chicago this past May.

After the reception, emcees Rick Bayless and Steve Dolinsky took to the stage and launched into their hosting duties. The duo, who won a James Beard Award for their podcast, The Feed, this year, displayed a warm camaraderie, with Kolinsky joking that his co-host only showed up because the surrounding neighborhood is known for great tamales and other Mexican food.

The evening’s dinner started with a first course by Local Stars Beverly Kim and Johnny Clark: boudin noir with delicately diced apples, kohlrabi, and a “seedy salad.” Kim and Clark are the chefs and owners of Parachute, which was nominated for the Foundation's 2015 Best New Restaurant award. Next came the second course from host chef Devon Quinn: Finfish Crudo with Avocado Mousse, Frozen Kefir, Grapefruit, Ginger, and Yuzu Kosho. Taste America All-Star Mark Ladner of New York City’s Del Posto delivered the night's third and four courses: Pork and Veal Agnolotti with Sugo Finto, Parsnip Purée, and Chocolate Nespresso; and Halibut in Saor with Cauliflower Tri-Colore, Toasted Almonds, and Moorish Spices. Ladner is no stranger to glory in Chicago: he took home the Foundation’s award for Best Chef: New York City at the May ceremony.

The festive evening concluded with a colorful dessert of Warm Bread Pudding Quenelle with Plums, Puffed Sorghum Brittle, and Buttermilk Crème Anglaise by pastry chefs Dave and Megan Miller, a husband-and-wife team who own and operate Baker Miller in Chicago’s Lincoln Park neighborhood. On Saturday the festivities continued at Sur La Table on Michigan Avenue, where Ladner demonstrated two Italian-inspired canapés: lobster and mayonnaise tramezzini (classic  Venetian tea sandwiches) and chickpea fritters with truffle and fontina cheese. "My particular style is to try to make food that's simple,” said Ladner. "Italian culture and ideology embrace simplicity, taking food grown close to you and trying not to manipulate it too much.” Chef Ladner also revealed some of his refreshingly convenient favorite ingredients: canned chickpeas (“Most chefs would agree that these are close to perfect.") and Kewpie brand mayonnaise (“It’s really hard to replicate the structure of store-bought mayo.").

Boarding House’s Tanya Baker, who was nominated for the Foundation’s 2015 Rising Star award, was on hand for a second cooking demo, preparing cured and braised pork belly with a kohlrabi slaw.

The James Beard Foundation's Taste America tour will make its final stop in Los Angeles on November 6. Learn more about Taste America at jbftasteamerica.org and follow the tour at #JBFTasteAmerica on Twitter and Instagram. 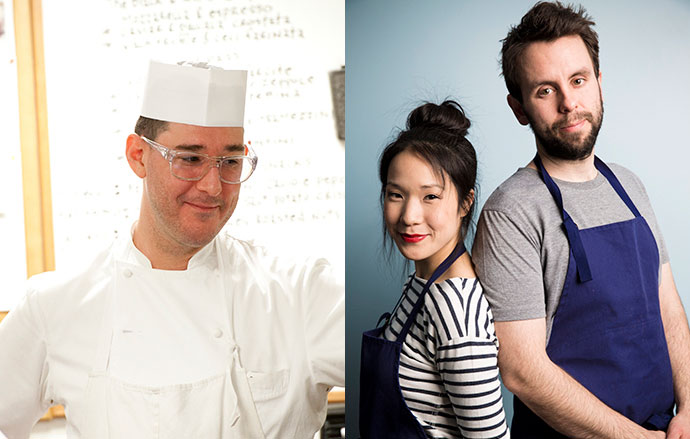