Martin with chef Amado Lopez of Vermilion in Chicago at the Housewares Charity event in March 2014. Martin credits Lopez with everything she has learned in the back of the house. “He is an incredible and patient chef. I wouldn’t say he’s like a dad, but he’s like a really cool uncle!”

Eliza Martin was working on the floor during a lunch shift when her training was put to the test. “The manager had left without giving notice,” she recalls, recounting how she stepped in to temporarily fill the position at the Chicago outpost of Vermilion until a manager from the restaurant’s New York City outpost arrived two days later.

At the time, Martin was several months into her Women in Culinary Leadership apprenticeship. She had been training to manage the floor, and this was her opportunity to actually do it. “It was our busiest weekend of the year,” recalls Rohini Dey, owner of the Vermilion restaurants in Chicago and New York City. “But Eliza was prepared and, along with our floor managers and lead servers who supported her, she stepped up amazingly.”

As the program’s very first grantee, Martin is spending one year training at both Vermilion outposts, as well as at the James Beard House, while being mentored by Dey and receiving a stipend to pay for rent and expenses.

The goal of the program? For successful men and women in the restaurant industry to address gender inequality and to open up opportunities for more women to become industry leaders.

Dey, who worked at the World Bank and McKinsey & Co. before opening the Vermilion restaurants, noticed some interesting similarities between management consulting and the restaurant world: “Both industries have a glass ceiling,” she says, “but in the culinary industry, the ceiling is even lower—there are so few women restaurateurs and executive chefs.”

To help women break through what she refers to as the gastro ceiling, Dey joined forces with JBF president Susan Ungaro to launch the Women in Culinary Leadership program in 2012. The following year the first phase of the program was launched: a one-year apprenticeship in which a promising chef is chosen for a mentorship developing the skills and gaining the knowledge needed to eventually land a top job in the industry.

“I had never worked with Indian food, I had never been responsible for the front of the house. I didn’t think I could do it. And now, I do it.”​

Martin was a line cook in New York City before being awarded the WICL grant, and has now spent the better part of the past year fully immersed in all aspects of the Vermilion restaurants, with Dey and her team guiding her through each demanding role, as well as one week at the James Beard House. “It has been a wild ride,” laughs Martin as she preps for dinner in the kitchen of Vermilion’s Chicago outpost. In a short time, she has worked in all areas of the kitchen and the front of the house. “When I started the program, I had never worked with Indian food, I had never been responsible for the front of the house. I didn’t think I could do it. And now, I do it.”

“Eliza has a huge hunger and an innate drive to learn,” says Dey. “Another candidate might stand around and wait to be introduced to the next module. But Eliza gets to the next step before I can! She has an amazing positivity and enthusiasm.”

Far from a typical training or stage program, the WICL aims to give the mentees the responsibilities they would have as an executive chef or restaurateur. “She has owned that kitchen, owned food costs, owned the floor, dealt with the employees, the customers, and large parties who walk in,” says Dey. “We want trainees to walk out of this program as leaders—whether they are a restaurateur or an executive chef.”

According to Dey, the chefs in the program can gain a career’s-worth of knowledge in just one year. In addition to working in all of the restaurants’ positions, the program aims to give grantees the financial literacy and business savvy needed to run a business. In Martin’s case, her on-the-job training was supplemented with business classes at a local school.

Martin’s favorite parts of the experience? All that she has learned about the ingredients and tools. “I didn’t trust myself at first with the tandoori oven,” she says. “Now I don’t know what I will do without one!” The other has been training the younger cooks. “It’s fun to watch the sparks go off when they get it,” she says. “I’ve learned so much, and I love handing down what I’ve learned.”

As she approaches the end of her year in the program, Martin is relocating to Chicago and will keep learning as she works on her business plan. “I’ve always known I wanted my own restaurant,” she says, “Now I’m clarifying my goals for what I want my restaurant to be.” Her hope is to continue to pass on all that she has learned to younger generations.

Thinking back to that stressful lunch shift moment, Martin’s pride in her achievements is palpable. “A lot fell on my plate at once,” she says. “But as my dad always said, ‘When coal is under enough pressure, it becomes a diamond.’”

Alison Tozzi Liu is director of media at the James Beard Foundation.

Do you have questions for our all-star panel? Send your questions to Rohini Dey via Twitter @rohinivermilion with the hashtag #womensleadership.

Think you’d like to be a WICL mentor or apprentice? Potential candidates or mentors can email us at wicl@thevermilionrestaurant.com. 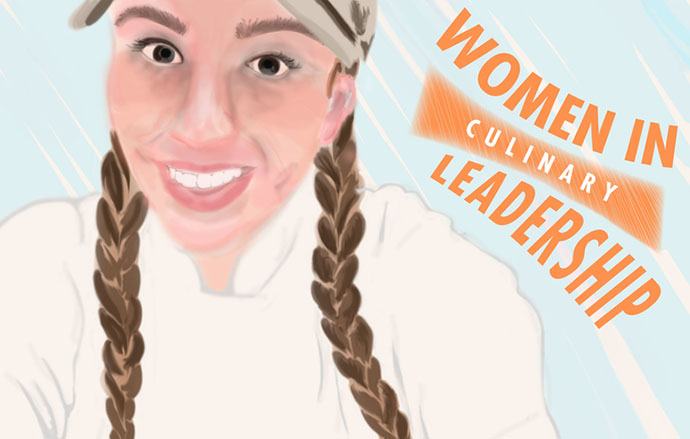