Having a Smoke: JBF Vice President Mitchell Davis to Judge Barbecue Contest on the Food Network Craving some ‘cue? Pining for some pulled pork? While the Big Apple may not be on par with Kansas City or Memphis…yet…over the last few years New York City developed quite a barbecue culture of its own. (Don’t miss the Big Apple Barbecue Block Party this year on June 11 and 12.) As luck would have it, the Beard Foundation has a barbecue aficionado in its midst. Who knew? Actually, everyone will know on May 8 at 10:00 P.M. EDT, when the Food Network’s new cooking competition series, Best in Smoke, debuts with our very own vice president Mitchell Davis as one of the judges. He’s joined by JBF Award–nominated co-author of Peace, Love & Barbecue, Amy Mills Tunnicliff, whose family runs the legendary barbecue destination, the 17th Street Bar & Grill in Murphysboro, Illinois, and JBF Award nominee, television host, and chef of the Lonesome Dove, Tim Love. JBF Award–nominated Reef chef Bryan Caswell will host. The competition is fierce, and many of the contestants have cooked at the Beard House, including Chris Lilly of Big Bob Gibson in Decatur, Alabama, and Chris Hart of the IQUE barbecue team. While he can’t tell us who wins—you’ll have to watch all four episodes for that—Mitchell can tell us his favorite spots for barbecue in the five boroughs. Here are his picks: Hill Country Barbecue "Great vibe, good for large parties, all-you-can-eat on Mondays. Delicious chicken, ribs, links, and especially fatty brisket." Blue Smoke "Nice to be able to compare the different styles of barbecue at one meal, especially ribs. Lovely environment, and don’t miss the desserts." RUB "No nonsense spot with tasty pulled pork, onion straws, and large drinks." Fatty ‘Cue "Maybe the most creative barbecue anywhere, with the welcome flavors of Asia in the mix. Terrific sides." Fette Sau "I recently judged a brisket contest and their entry was the epitome of delicious brisket." Dinosaur BBQ "Where a BBQ place should be, a little out of the way and in a place where you can make a lot of noise. Great for large groups." 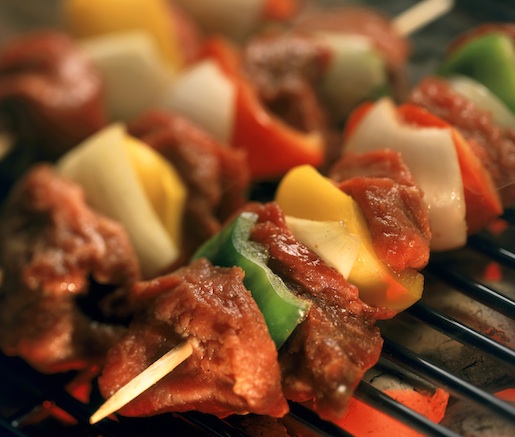