"You can have your molten lava cake; you can have your chocolate soufflé; just give me a classic, really, really delicious, moist, loaded-with-frosting chocolate layer cake, and that's all I need." Coming from a pastry guru like JBF Award winner Emily Luchetti, that's saying something. In her lauded career, Luchetti has worked at some of the most glitzy San Francisco restaurants (Farallon, Waterbar)—and she's now the chief pastry officer at the uber-popular Marlowe, Park Tavern, and the Cavalier.

Luchetti's classic chocolate cake is all of the good things she mentions above and more. It's easy to make. It has the perfect frosting-to-cake ratio. It's impressive in its old-school simplicity. And, like she says, it "turns every dinner into an occasion—because it's cake!" The recipe is a family hybrid: it combines Luchetti's grandmother's frosting (which she used to call "Grammy's chocolate frosting") with her husband's grandmother's cake recipe. Over the past 20 years or so, she's evolved it, making the frosting more velvety and the cake a touch sweeter, but, "It's at the point where I'm not messing with it anymore," she laughs. We wouldn't touch a thing either. Unlike recipes that simply use a cocoa powder paste, Luchetti's version folds in melted chocolate for extra oomph. Luchetti's expert tip: sift the dry ingredients to achieve an ultra-fluffy batter. The swirls of rich, thick frosting start with a ganache base; make sure you put the sugar into the hot cream so it dissolves and you don't get any graininess. The cake should be completely cool before you frost, and although she definitely recommends using an offset spatula, Luchetti doesn't want you to fuss. "The beauty of a layer cake is that it doesn't have to be perfect. Its rustic-ness is what makes it beautiful," she says. "I'm an 'a-lot-of-frosting' person—just make sure you leave enough for the top when you frost the middle."

We'll confidently state that this is the best darn chocolate cake we've ever had. Luchetti herself says, "Taking the first bite, I feel like there's nothing else going on in the world—and that's what a good dessert should be." Agreed. Now may we have another slice?

Get the recipe for Emily's superb chocolate layer cake. 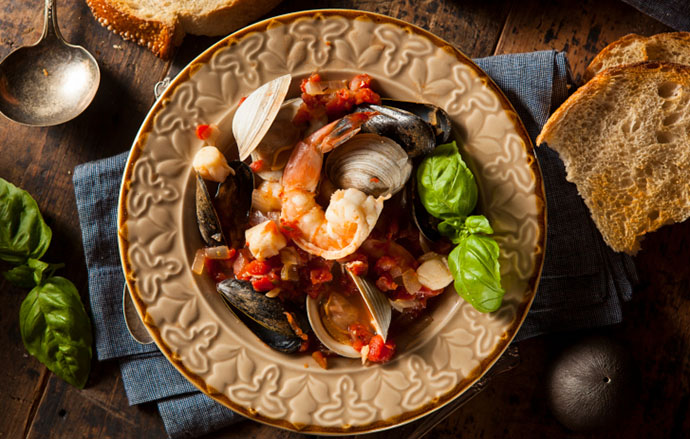