Greek yogurt is everywhere. In our granola bars, our hummus, even our shower gel. When a foreign health food becomes the official state snack of New York, you know it’s hit the mainstream. But one unexpected advantage of Greek yogurt’s ubiquity is the piquing of the American palate for thick, tangy spreads, and chefs are constantly looking to regional Mediterranean cuisines for similar ingredients. We noticed labneh, the Middle Eastern iteration of strained yogurt, popping up on Beard House menus this spring and summer, and realized that this spread is on the rise across the country.

It turns out that what we think of as "Greek Yogurt" is really just one member of the family of strained yogurts that grace most tables of Mediterranean, Middle Eastern, and North African countries. In Greece, it’s called straggistó giaoúrti, in Egypt, zabadi, and in Lebanon it’s known as labneh (from laban, the word for yogurt). What makes labneh distinct is the extent of the straining process: it’s produced by removing nearly all of the liquid, leaving a “yogurt concentrate” in the form of a fresh, spreadable cheese.

In some cases, it’s used in a more traditional manner, as a mezze dip or sandwich ingredient, but increasingly labneh is crossing borders and sneaking into other cuisines on U.S. menus. Bryce Shuman uses labneh as the base for a puffed grain salad at the 2014 JBF Award–nominated Betony, which he broke down step-by-step in a recent Hanging with Harris video (the recipe for this salad also appears in the latest issue of Bon Appétit).

At JBF's upcoming “Along the 38th Parallel” dinner, chef Alfredo Malinis Jr. of Charlottesville, Virginia’s Parallel 38 will pair labneh with a duo of branzino, “for a tartness to balance out the dish.” At his home restaurant, it appears in three sections of the menu in increasingly unusual dishes: as one of their shareable spreads, as an accompaniment to a Catalonian take on ratatouille, and with his version of chicken wings, where the labneh is spiced with saffron. Malinis credits labneh’s versatility for its prominence on his menu : “Not only does it regionally fit our concept, but it has the ability to be melded with other flavors without losing too much of its desirable characteristics.” Owner/sommelier Justin Ross agrees, arguing that labneh is “one of the most versatile ingredients in Mediterranean cooking. I see it as a combination of crème fraîche, cream cheese,and sour cream.”

Perhaps because of this inherent adaptability, American chefs aren’t limiting labneh to just savory items. Nick Morgenstern’s new ice cream parlor in New York City, Morgenstern’s Finest Ice Cream, offers it as both a topping and as a sorbet flavor, while at Seattle’s The London Plane, JBF Award Winner Matt Dillon uses their housemade labneh sweetened with powdered sugar and vanilla as the frosting for his cinnamon rolls. His pastry team was looking for an alternative to cream cheese, and landed on labneh because it retains the  “tartness and lusciousness [of] cream cheese,” while having “a much lighter mouth feel and … a tangy brightness to it that cuts through the sweetness of the roll.” The team is still pushing the labneh envelope, exploring other possibilities for lightening up classic desserts.

Labneh seems just on the cusp of breaking into the mainstream, slowly creeping into our Greek yogurt-covered lives. Even in New York, “America’s Yogurt Capital” (according to Governor Cuomo), you’ll find it sneaking into the market. Take a peek at the menu for Chobani Soho, the yogurt juggernaut’s sole retail location. Tucked alongside the Greek yogurt parfaits, the store offers a selection of “Simit Sandwiches” topped not with Chobani’s Hellenic star product, but with none other than plain and blended varieties of a certain Lebanese yogurt cheese. And if Chobani’s jumped on the bandwagon, soon we could all be lathering up with labneh.

To make your own labneh at home: take plain yogurt and put it in a strainer lined with cheesecloth or paper towels. Place that over a bowl to catch the liquid, and let it sit on your counter for 8-24 hours. Top with a drizzle of olive oil and a sprinkling of za’atar or fresh herbs, and serve with crackers or pita.

On the Menu: Week of January 25 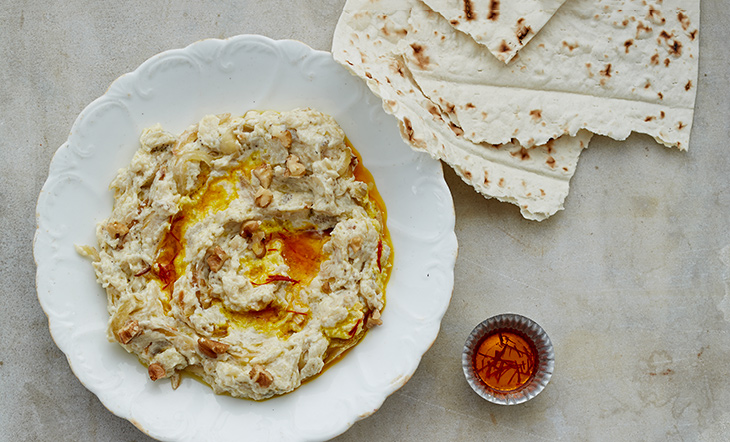