Interview: Daniel Humm and Will Guidara of Eleven Madison Park Daniel Humm and Will Guidara are winding down after a packed 2011, which included a coveted third star from Michelin, a JBF Award for Outstanding Restaurant, a new cookbook, and complete ownership of their restaurant, which was previously run by Danny Meyer. We sat down with them to talk about their inspirational book tour, the reinvention of EMP, and surprisingly ambitious home cooks.

JBF: In the book you talk about taking an annual trip to find inspiration. Where did you go this year?

Will Guidara: We’ve taken a lot of trips this year, but I think the most impactful trip has been our book tour, which included stops in Chicago, San Francisco, Los Angeles, and Boston. We talk about this in the book, but what rings truer every time we go away is the perspective we’re able to gain. We love seeing other restaurants and other cities, the architecture, people, and artists. We returned from that trip with an incredible dose of inspiration, just by seeing how hard other people are pushing out there.

Daniel Humm: Yeah, Grant Achatz and his guys in Chicago are doing incredible things, at all three places. The Animal guys are always thinking about reinvention. Corey Lee and Daniel Patterson are both working very hard and doing great things in San Francisco. We always feel like we’re working hard, but then we see these other young guys and we’re like, “Okay, we need to work harder!”

JBF: Any particular sources of inspiration from the tour?

WG: We had never been to Los Angeles together and we took some time to just walk around. We saw a bunch of older architecture, but with new and very modern additions. We spent hours talking about that idea of contrasting classic and modern elements; when it’s done well it’s very beautiful. As we say in the book, we continue to strive for that sense of balance here, too. We continue to be inspired by other restaurateurs, but I think as we grow more mature, we discover inspiration in other places we never saw it before.

DH: We have friends who have a lot of art, particularly abstract art. When you look at that style, there’s always a story behind it—it’s not just two lines on a canvas. There has to be a reason behind it. I believe more and more that less is more, on the plate and also beyond the plate, but it can’t be less for the sake of being less. It needs to have a story behind it.

WG: There are a lot of people who grow for the sake of growing, and they don’t grow well. It’s cool to see people who grow deliberately and with intention, in measured doses, and, by virtue of that, accomplish such phenomenal things in the process. Danny [Meyer] always says that there’s no point in growing unless it makes everything better.

JBF: Right, and EMP is never just on autopilot. It seems like you’re always thinking about how to grow.

WG: Exactly. In the book we talk about endless reinvention, and how we got that from Miles Davis. We’ve become really close with all these living members of his entourage, like saxophonist Bill Evans, who was here the other night before dinner service and just whipped out his soprano sax and started ripping right in the middle of the dining room.

DH: Bill was also talking about how Miles never played the same piece the same way twice. He was recalling this one concert in Paris, where Miles started playing an old song, but the audience didn’t realize what song it was until a couple minutes in. Then the fans started going crazy, and Miles stopped and said, “Are you people fucking stupid?”

WG: (Laughing) Okay, so there are certain things about Miles Davis that we’re not inspired by!

DH: No, not that part. But he was just so extreme about always doing something fresh. He insisted that no one was a true musician if he played the same thing twice.

JBF: Your team has accomplished so many of the goals you set out to achieve. It’s brave to reinvent yourselves after you’ve reached a formula that’s clearly been very successful. How are you thinking of evolving in the near future?

WG: Over the course of the next year we want to more effectively capture the spirit of New York, and to make the restaurant as rooted in this city as possible. Too many fine dining restaurants all over the world have a sense of a place that’s anywhere but where they are actually located. We are blessed to have this room, which captures the spirit of this city better than almost any other. There’s also a renaissance of manufacturing happening around us, right over in Brooklyn, Long Island City, Jersey City. We have these young metalworkers, ceramicists, glassblowers—we want to highlight the proliferation of people making things with their own hands at a time when it’s almost disappearing from America. These people are saying, “Screw that. This country was built on creation.” That’s inspiring beyond belief, and it’s a big part of where we’re headed.

JBF: In your book you provide readers with an email address to write to if they need help with something. How many emails have you received?

WG: On the book tour we’ve been telling people to take pictures of anything they make from the book. We have a photography exhibit in our service station that’s always changing. It’s usually photos by members of our staff—we have a lot of talented photographers. We’re thinking that in about eight months we’re going to hang up a ring of photos of our food created by other people in their home kitchens.

JBF: Have you found that people gravitate towards certain recipes?

DH: Based on the photos, I’ve been surprised by which dishes people have tried to take on at home. They don’t always do every detail of a dish, like they might make the salt crust for the black sea bass, but they won’t cut out the correct beet shapes for another recipe. Some people also write to me and ask me to design a menu for them, so that’s pretty cool.

JBF: Are you surprised by how ambitious American home cooks are?

DH: Yes, cooks here are doing a lot. I mean, you can buy a sous vide machine from a SkyMall catalog now! The maturity and ambition of American cooks has really impressed me. I don’t think you find that sort of thing in Europe.

JBF: Are you two taking a vacation soon?

WG: We’re going to Blackberry Farm. We’re actually doing a dinner there, but we’re also going there to relax.

JBF: Last question: what was the best meal you had in America this year?

DH: Without hesitation, I think, for both of us, it was at Coi. Daniel Patterson has a unique point of view. His food is exciting and different, and not just for the sake of being different.


Eleven Madison Park: The Cookbook was published by Little, Brown & Company in November. 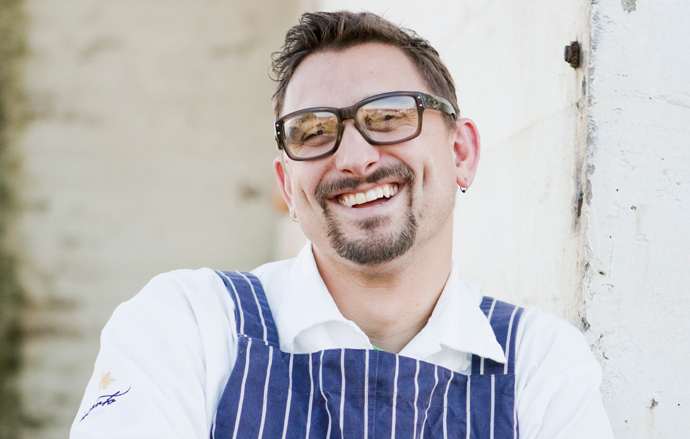