Interview with Stuart Brioza of the Progress, Nominated for Best New Restaurant San Francisco power duo Stuart Brioza and Nicole Krasinski are no stranger to the James Beard Awards: in 2013, the pair took home our Best New Restaurant medallion for State Bird Provisions, and now, just two years later, they’re nominated in the same category for their newest concept, the Progress, located just next door. Read on for Stuart Brioza's insights on the restaurant's unique shared-plates format, its organic environs, and where he plans to chow down in Chicago.

JBF: We’ve been asking all of the chefs behind our Best New Restaurant nominees to tell us the stories behind the restaurants’ names. Can you share yours?

Stuart Brioza: ​The Progress was actually the name of the theater that our restaurant’s building was originally built as in 1911.

JBF: The menu at the Progress has a shared-plates format that’s pretty unique: you scale the servings according to party size. What led to this approach? Had you seen it elsewhere? Is it just more a pragmatic format from a kitchen operations standpoint?

SB: It’s simple: We wanted to have a family-style menu that reflects sharing of food, abundance, and consideration. The idea stems from food that is prepared with intention to be shared similar to our favorite dining experiences from traveling around the world.

There are challenges to operating any kitchen, however, and by cooking dishes for the table, it removes the individual plate and timing coordination of a traditional menu.

JBF: The restaurant’s design has received a lot of attention, and you worked with the same designer who did State Bird Provisions (SBP). What inspired “the look” of the Progress?

​SB: [Designer] Wylie Price is an amazing collaborator and works in a very open, organic, and detailed way. We mapped out the overall design and continued to design as we went. This isn't typical with many "restaurant" designers and contractors and is very challenging, but worth the effort to work like this. We were very focused on allowing the design to be informed by the day and with the artisans and craftsman that were a part of the project. Wylie is fully engaged with the project in this capacity, and this is the way he works best too.

We started the design with good bones of the building. The most dramatic detail that informed much of the design is the original curved ceiling. There are subtle nods to the curve throughout the restaurant: lamp arms, the undersides of the wooden tables, banister railings, and workstations to name a few. Other inspirations were San Francisco public parks in the lighting and bench seats, as well as the San Fran botanical gardens with metal framing and opaque glass [on the building’s front]. JBF: With your other restaurant next door, how do you divide your time and attention?

​SB: We have chef de cuisines, John Becker for the Progress and Kevin Law for SBP, and sous chefs at each restaurant that manage the daily operations.

As a team at each restaurant, we meet weekly for about two hours and discuss menu changes, farm ingredients, seasonal changes, staffing, etc. Throughout the week, the chefs and I work on new dishes and taste a lot. I have a very open style; like the design, we work organically in a series of conversations. In opening the Progress, it required us to really define the way of the food and focus on their differences as well as similarities.

Each afternoon, we spend time discussing the previous night’s service, go over the manifest for the evening with our general managers and dining room managers at each restaurant. Staff/pre-service lineup happens 15 minutes apart from each other so that we can attend/help conduct at both restaurants. During service I generally traverse between both kitchens and dining rooms; it's about a 20-second commute.

We also built a butchery department that triangulates both SBP & the Progress in terms of major butchery projects, whole animals, fish, charcuterie, fermentation, and preservation.

For the pastry department, Nicole has her own kitchen that produces for both restaurants. They work very closely together and oversee setup of the pastry line for both kitchens.

JBF: After two restaurant openings, what have you learned? What are some tips you’d share with other chefs and restaurateurs?

​SB: The hardest and most rewarding learning curve has been the importance of being a good manager and to employ those who are effective managers as well. We are continually learning to create very rewarding places for our staff to work. Opening two restaurants felt like the work of being in three restaurants for about three months leading up to the opening and the first three months of being open. As systems, staffing, and overall feel of the restaurant became more comfortable, the fun started to begin and we settled back to two restaurants.

JBF: We hope to see you at the Awards in Chicago! If you are planning to attend, where would you like to eat while you’re there?

SB: ​Nicole and I lived in Chicago for about four years, so we are really excited to attend this year’s Awards festivities. We have some classics and favorites which are quite lowbrow, like Bari Foods for Italian subs and Giardiniere, ​Mr. Beef, El Taco Veloz. We love Donnie Madia and Paul Kahan’s restaurants, so we'll be sure to check into a couple of their places too. Some others that we’d like to hit up are Trencherman, Yusho, and Frontera Grill. 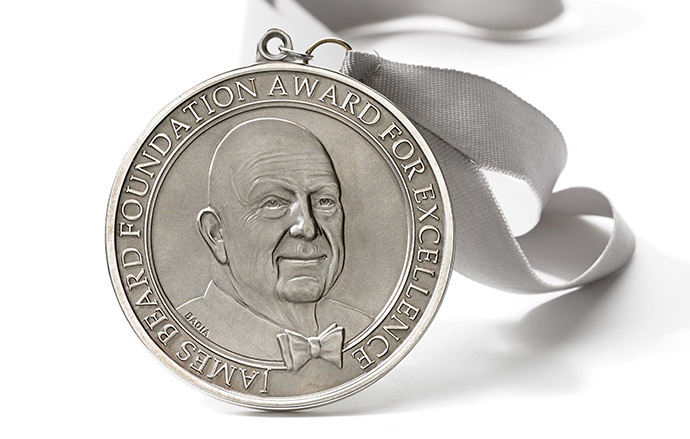