On the Menu: Week of September 30 Here's what's on the JBF calendar next week:

We’re bringing the best of Brooklyn to the Beard House! Join us for a special multi-course menu prepared by chefs from the city’s most delicious borough. The Greens will offer an exclusive The Glenlivet scotch tasting during the reception.

After a brief stint at the Encore in Las Vegas, husband-and-wife team Ryan and Kelleanne Jones returned to their native Connecticut to open the acclaimed Mill at 2t, where discerning locals can get a taste of the couple’s modern and ingredient-driven American cuisine.

30 Years of the Water Club

With classics like lobster thermidor and contemporary favorites like oyster martinis with bitters, it’s no wonder that the Water Club has been around for 30 years. To mark this special anniversary, Le Bernardin alum chef Aaron Bashy has created a menu of the Water Club’s greatest hits, past and present.

A Spoonful of Paradise

Take the seductive, ingredient-driven cuisine of one of Santa Monica’s hippest restaurants, combine it with the dessert stylings of one of the L.A.’s hottest sweet spots, and pair it all with vine-to-table selections from the pioneering Emanuel Tres wines in Santa Barbara, and you have the recipe for an of-the-moment Southern California feast right here in NYC.

Known among the A-list crowd as the unofficial place to see and be seen, West Hollywood’s Sunset Marquis also attracts its clientele with Joël Robuchon protégé Guillaume Burlion’s top-notch fare. Treat yourself to a decadent meal fit for the silver screen at this special Friends of James Beard Benefit dinner.

What’s causing all the buzz on the North Shore? Surely it’s John des Rosiers’s empire of innovative restaurants, which entice Chicagoans to trek beyond the city limits. For this unique dinner, Rosiers and Philip Rubino will present a menu that alternates between modern Italian cooking and globally influenced American cuisine.

When one of the Lone Star State’s most beloved chefs teams up with one of Napa Valley’s most ambitious wineries, you can expect big Texas steakhouse flavors and bold, complex wines. Join chef Joanne Bondy at the Beard House when her menu highlights the wines of Palmaz Vineyards, crafted with state-of-the-art techniques. 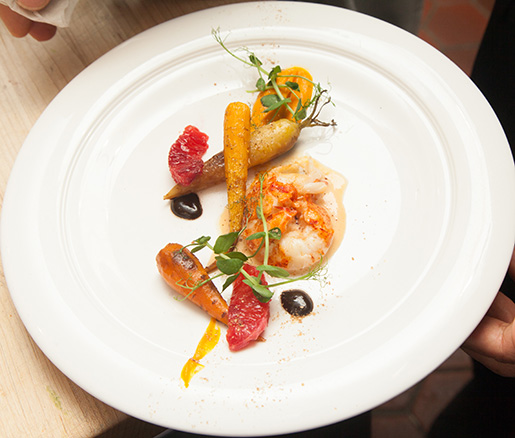