Q & A with Dave Beran of Next Among Chicago’s strong showing in the JBF Award nominations, Grant Achatz’s massively popular Next boasts two nods: the restaurant itself is up for Best New Restaurant, while its executive chef, Alinea alum Dave Beran, is nominated for our Rising Star Chef of the Year award. We chatted with chef Beran about Next’s future, inspirational cookbooks, and his favorite meal of the past year.

JBF: We’ve heard that there are Sicily and Kyoto menus in the pipeline for Next. Have you guys done any brainstorming about other periods in history or cuisines that you’d like the tackle this year or beyond?

DB: So far those are the only historical menus planned for 2012. I’ve been interested in a menu pertaining to pre- and post-Imperialist India—sort of a compare and contrast thing. There have been talks of a handful of others, but nothing has been set in stone.

JBF: Do you ever think about doing other menus that are less historical and more conceptual, like the Childhood menu?

DB: Many of us at Next came from the Alinea school of thought: there is always the desire to create. I’m certain that we will do more menus like Childhood—occasionally you have to let out a bit of the creative energy. Doing a menu like that gives us the opportunity to see and use everything that we’ve learned from the previous menus. The Childhood chicken noodle soup, for example, combined three major techniques from the Paris menu. I’m not sure what we will do yet, but we will do something of a similar mindset.

JBF: Besides recipe research and testing, are there other ways that you and your team prepare for a new menu?

DB: We actually drew some inspiration from Noma: we do Sunday night, post-service projects, which is an open forum for the cooks to produce dishes for their peers. They always relate to what we’re doing next. During Thailand, for example, we encouraged the kitchen staff to do courses pertaining to childhood.

JBF: We know you’re usually too busy to dine out at other restaurants, but are there any spectacular meals you’ve had over the past year that you could tell us about?

DB: On a whim, my sous chef and I decided to drive to Virginia and eat at Town House (now closed) in Chilhowie. The former chef, John Shields, is a good friend of mine and I’d been meaning to eat his food for a long time. It was probably the best meal I had last year. The food, the experience, seeing what a chef whom I looked up to had become—everything about it was spectacular. We arrived after ten hours of driving, ate dinner, hung out for a bit, woke up the next morning, and drove back to Chicago. I can’t wait to see what he does next.

DB: I love Modernist Cuisine—it’s a great reference. The Culinary Institute of America’s Chocolate and Confections has also been a favorite lately. As far as inspiration, I still love to look at the Alinea book, The Fat Duck, and all of the el Bulli books. Here at the restaurant we give the cooks sections from The French Laundry Cookbook all the time; my sous printed off the stock-making section last week and passed it out to the entire kitchen staff.

DB: My father teaches hotel and restaurant management. One night, when I was really young, my father and I went to one of his kitchens and he threw a bunch of mussels in the steamer. He brought a stool out for me, then we opened the steamer and ate mussels right out of it.

DB: I grew up in Syracuse. We used to always get fried fish sandwiches or clam chowder on Fridays and Buffalo wings on Saturdays. Those are still some of my favorite things, and I eat them whenever I head back to New York. 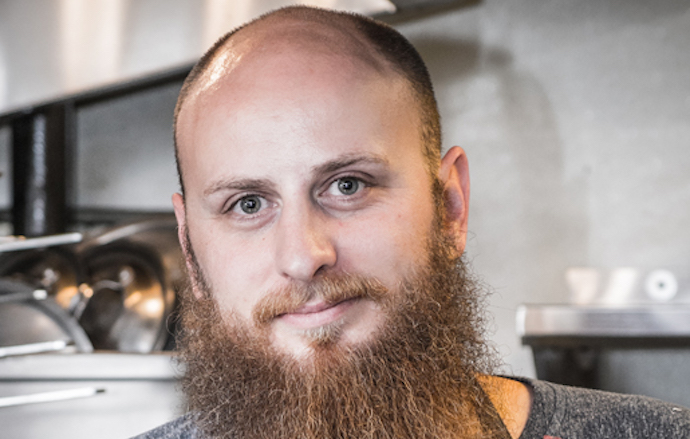