Q & A with Rohini Dey, Restaurateur and "Women in Culinary Leadership" Program Partner Like many industries, the world of restaurants suffers from a dearth of female leaders. In an effort to get more ladies into high-profile culinary roles, JBF has partnered with restaurateur Rohini Dey of Vermilion restaurants to launch the Women in Culinary Leadership Program, which includes a scholarship and the supporting Chefs for Women fundraiser. Read on to get Dey's perspective about this important initiative.

JBF: How did the Women in Culinary Leadership Program begin?

RD: I’ve worked in international institutions and with leading corporations, so I’m very familiar with the so-called glass ceiling. It’s something women learn very quickly to work around. I’m now in my tenth year as a restaurateur, and what continues to stun me is how much lower the “gastro ceiling” is than the glass ceiling. While women abound in culinary colleges, they fade away in the field, working predominantly as line cooks on cold stations like the garde manger, or as pastry cooks. Few lead as acclaimed executive chefs. Even fewer lead as successful professional restaurateurs; most women restaurateurs are in family businesses or work with a spouse. The statistics back this: during the twenty-three years of James Beard Awards, 60 percent of the Outstanding Pastry Chef Awards have gone to women, while 13 percent of Outstanding Chef Awards and zero Outstanding Restaurateur Awards have gone to them.

Vermilion has worked with JBF on a number of occasions, so I had opportunities to meet with president Susan Ungaro. During one of our meetings, our conversation quickly turned to something we’re both passionate about: the scarcity of women in leadership positions in our field. The Women in Culinary Leadership Program was born from that conversation. It aims to help women advance in the hospitality industry, and will be supported by the Chefs for Women program. Both will raise funds that will go toward creating leadership opportunities for women.

JBF: Why is the Chefs for Women program so important to you? Who else will be getting involved?

RD: Chefs for Women is hugely important to me because it signals that leaders in our community—both men and women—are aware of the rarity of female leaders and are prepared to do something to address it. These are celebrated and highly lauded chefs from across the country who are lending their brand and marquis dishes to raise funds for our scholarship. The founding roster of chefs includes Emily Luchetti, Michelle Bernstein, Lorena Garcia, Douglas Rodriguez, Patricio Sandoval, Sue Torres, Carmen Gonzalez, Anthony Lamas, Aarón Sanchez, and Susan Weaver. You can see what these chefs have to say about the subject in an op-ed I wrote for the Chicago Sun Times. Each chef will showcase a few signature dishes for one month throughout the year at Vermilion restaurants in Chicago and New York. A portion of the proceeds from each dish will go to the James Beard Foundation Vermilion Women in Culinary Leadership Scholarship. This is only the launch, so we’re looking forward to continued traction and more chefs joining the initiative.

JBF: You held a Women in Culinary Leadership Evening at Vermilion in New York City in September. What can you tell readers about that?

RD: The event marked the launch of the Women in Culinary Leadership program and also featured a panel of female culinary leaders—Martha Stewart, Lidia Bastianich, Dorothy Cann Hamilton, and Susan Ungaro—joined by myself and moderator Martha Teichner of CBS News. (You can watch a video about the event here.) At the opening of the evening, I promised everyone that we would have a candid discussion—and I think we more than delivered!

For me, it was a high to host these incredible women at Vermilion. I loved hearing the perspective of each panelist, but also enjoyed the interaction and the enthusiasm of the guests. The turnout was fantastic: we had Carmen Gonzalez, Emily Luchetti, Elizabeth Falkner, Women Chefs and Restaurateurs president Rochelle Huppin, and StarChefs president Antoinette Bruno in the house.

I look forward to working with Susan and JBF to fund and define leadership opportunities with this scholarship, to deepen our CFW program, and to create concrete mentorship and internship opportunities at Vermilion and other restaurants. There’s much to be done, and this is just the beginning.

In closing, I want to mention that we’re still looking for culinary talent to join both Vermilion locations, so women—and men—should know where to find me! 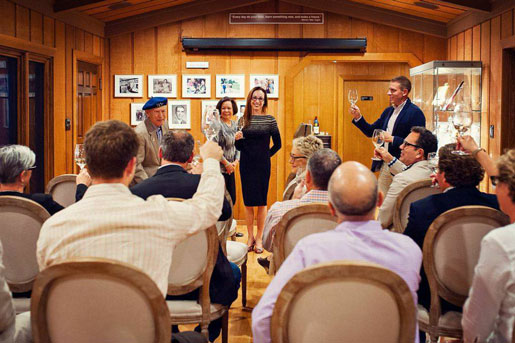