When State Bird Provisions opened last New Year’s Day, it offered a novel vision of dining from husband-and-wife team Stuart Brioza and Nicole Krasinski. Instead of taking orders tableside, their staff wheeled around a cart, dim sum–style, piled with the couple’s intricate, globally inspired small plates. The format—and the Rubicon graduates’ exciting food—seemed to win over just about everyone in San Francisco and beyond. We spoke with Stuart and Nicole about their follow-up project, the versatility of pancakes, and where they eat on their days off.

JBF: There's a section on your menu that's just pancakes, so we have to ask: why pancakes?

SBP: Many cuisines around the world have some form of a pancake, so we took that as the starting point to make several types of savory pancakes that showcase bold flavors, whether it’s sea urchin, fresh pickled anchovies, sauerkraut, kimchi, or soft cheese. Who doesn't like a pancake crisped in butter?

JBF: We've read that State Bird Provisions came together in a very organic way, evolving over the course of several months, with lots of input from your friends and customers. Do you feel that the restaurant has settled on its ultimate identity, or do you plan on introducing any new concepts during the coming months?

SBP: When we opened SBP, we thought of it as our mid-century workshop focused on the craft and collaboration of food, and we let the dishes sell themselves rather than in print. Through this process, the menu started to evolve from about 12 dishes to around 30 dishes, many of which have become semi-permanent ideas that float with the seasons.

The interior started the same way. Several of our artist friends collaborated on the handicraft of the pegboard walls. We have a great collection of handmade pottery elements that add to the creative eye of our florist. The restaurant is warm and vibrant in its décor, which really is in sync with the warm hospitality that we pride ourselves on.

It took a while to settle on our “identity”, which really pushed inspiration. I've always liked the quote “dead fish don't swim upstream”. SBP will continually evolve and we've got a real solid foundation to build upon.

JBF: What's a dish that you're especially proud of or excited about that's on the menu now?

JBF: You two are going to be opening your second project, the Progress, down the street. Are there any new details about it that you'd like to share?

SBP: We are fortunate to be in a century-old building that has enough space to house two restaurants. It has always been a dream to have this kind of setup where we can share elements of each kitchen and limit our commute. The Progress will work in a way that’s different and yet symbiotic with what we've learned at SBP. It's a larger space with 25-foot ceilings and a mezzanine. We'll have a full bar, larger tables, and larger plates.

JBF: You’ve said that you wanted State Bird to be a restaurant that chefs go to on their days off. Where do you like to go on your day off?

SBP: Zuni for the Caesar salad, Nopalito for Mexican food, Turtle Tower for a bowl of pho, Outerlands, Bar Tartine.

JBF: It's probably tough for you to find time to dine out, but can you tell us about a great meal you've had over the past year?

SBP: Ibai in San Sebastián. This was a lunch that suspended time for hours. You have these experiences based on where you are mentally: we were open to it and it caught us off guard. We were the only foreigners, there was a language barrier, no printed menu, and no fuss. The food was expertly prepared, but it went beyond that—it was a social experience. It was the ultimate restaurant

SBP: For Stuart, a steamed artichoke with mayonnaise. For Nicole, eating pomegranate from the neighbors’ yard while sitting on top of the washing machine—so Mom could throw any stained clothes directly into the laundry! 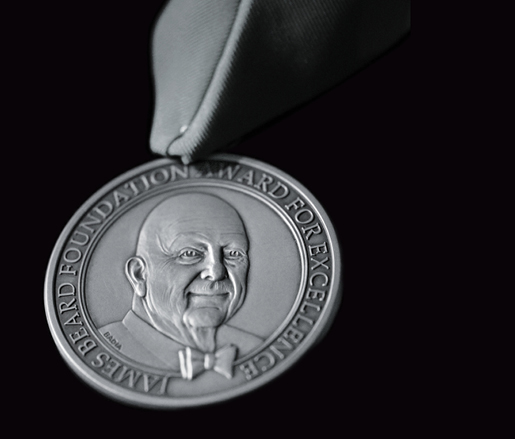