In the age of ramen burgers, molecular gastronomy, and other innovations and trends, it can be easy to forget the roots of true American cuisine. As we've prepared for James Beard Foundation's Taste America®, our cross-country food tour celebrating this country's long-standing regional traditions, we dug up this essay from our patron saint's 1982 collection, The Armchair James Beard. Throughout his strikingly evergreen observations (save for calling garlic "very new and chic"), Beard reminds us where American cooking began, and the changes it has endured. It's brimming with his characteristic insight, wit, and charm. And, of course, there's a recipe.

(from The Armchair James Beard)

People are trying very hard to make American cooking as phony as nouvelle cuisine sometimes has been. They are dreaming up food that is about as American as Peking duck, though without its crispy succulence, and everybody seems to have a different theory as to what our cookery is all about. Sometimes I get the feeling that if the ingredients are not still twitching or just off the branch, one-quarter the normal size, and produced by a farmer in the outer reaches of New Hampshire or Oregon, your dish can’t be labeled as true-blue American.

Well, the truth of the matter is that the way people eat is an unconscious reflection of the way people live. We have a great tradition of home cooking and restaurant cooking that spans three centuries. We are now, I hope, in a new epoch of gastronomic excellence that, with a liberal seasoning of common sense, will draw on the best of American cookery as well as on the technological advances of the new.

Great excitement has been engendered over the fact that Belon oysters can now be raised from French seed on the Maine coast, and I am quite sure there will be a tremendous hullabaloo if a company named Agri-Truffle is successful in its attempts to grow French truffles under California oak trees. These efforts are made in the name of the new American cuisine, though I am not sure why.

American food, as defined in an earlier age, was, of course, regional. Planes and refrigerated trucks didn’t rush lettuce and seafood and strawberries from one side of the country to the other. Recipes were perfected by women who came from practically every country on earth and used traditional family methods and locally available ingredients. Many of these recipes found their way into little fund-raiser cookery books put out by ladies aid societies, missionary societies, hospital volunteer groups, and women’s exchanges. Thus we developed a tradition of such things as New England clam chowder, Manhattan clam chowder, New Orleans court bouillon, San Francisco cioppino, Oregon crab soup, and, in the Midwest, catfish-head soup. All different, all delicious.

As the nation became more industrialized and kitchen help vanished and more women took up careers, shortcuts in the kitchen were the order of the day. Now, in the age of the cooking school, it appears that the average cook—man or woman—is expected to turn out slices of lobster pâté adrift in a sea of asparagus sauce (complete with a tomato “rose”), pheasant potpie with a dome of puff pastry six inches high, and a mousse of watercress. All this in an hour or less after getting home from work. There is a difference between good American home cooking and good American restaurant cooking, but the distinction is becoming blurred.

American home cooking, generally prepared without help but with superb mechanical aids, such as the food processor, uses ingredients that are as fresh and natural as possible. It is done in a relatively short time. Company cooking, on the other hand, is usually a weekend effort.

My advice is to avoid treating the much-touted “new American cuisine” as if it were some kind of patriotic endeavor one simply must pursue. It’s mostly journalistic hype, and it’s pointless to try to name a “Vestal Virgin of American cuisine,” a “King of the New American Restaurants,” or a “Queen of New American Cafés.” I have yet to meet any culinary vestal virgins, kings, or queens in the food world—just ordinary folk, who are all contributing to the development and betterment of our eating habits.

To my great amusement, masses of garlic are now considered very new and chic in a number of the more avant-garde restaurants. Well, garlic is nothing new. In former centuries, garlic was treated as the vegetable it is. When cooked slowly, unpeeled, for a long time, it becomes mild and mellow to the point where you can pop the creamy pulp from the husks and eat the purée on crusty bread or add it to a sauce or a cheese soufflé mixture.

I am giving you a recipe that is originally Hungarian and was found in a manuscript cookbook of a Midwestern housewife. This dish serves eight to ten persons. It’s old, it’s new, it’s red, white, and blue. What more could you ask?

Rub a 12- to 14-pound goose well with salt and pepper. (If frozen, it should be thoroughly defrosted.) Stuff the cavity with 2 pounds of garlic, broken up into cloves but not peeled. Sew up the goose, place it on a rack in a roasting pan, and cover it with foil. Roast in a 375˚ oven about 2 hours. Remove the foil, and prick the skin of the goose very well. Pour off the fat from the pan and reserve it. Continue roasting the bird 1/2 to 3/4 hour longer until the skin is brown and crisp and a meat thermometer registers 175˚.

Serve the roast goose with braised red cabbage and mashed potatoes, to which a little of the goose fat and garlic purée have been added. To make the purée, simply squeeze the creamy pulp from the unpeeled garlic cloves roasted inside the goose. 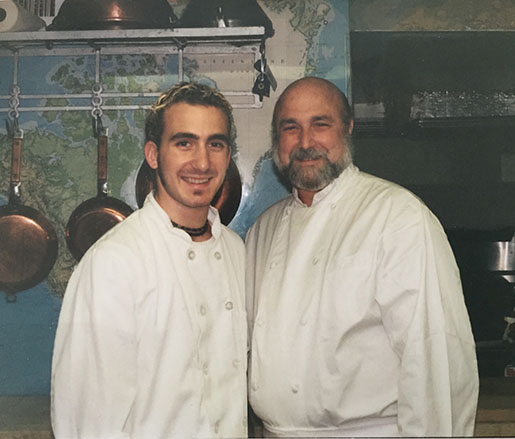