From sour cream sorbet to toasted sassafras ice cream, unusual frozen treats are all the rage at upcoming Beard House events. In his Spring 1996 Beard House Magazine article, “I Scream, You Scream, We All Scream for… Crab Ice Cream?”, former JBF associate editor Adam Rapoport, whom we all now know as Bon Appétit's editor-in-chief, reported on a similar phenomena. Check out some of the funky flavors that appeared at Beard House dinners in 1996, then continue reading for a preview of the innovative ice creams at our upcoming events.

Survey the variety of ice creams recently served at the Beard House, and the notion of 31 Flavors seems quaint. Filling in for strawberry, chocolate, and vanilla have been tempting tastes like saffron, cardamom, and Amarene sherry. At his Discovery Series dinner on January 31, Bruce Cooper of Jake’s in Philadelphia put a spin on the traditional coffee flavor, infusing his homemade vanilla ice cream base with Earl Grey tea. Moncef Meddeb went the Middle Eastern route in February, flavoring his ice cream with Arak, the fiery, anise-scented liquor.

But few flavors raised as many eyebrows as those served by Brian Poor of Chandler’s Crab House in Seattle and Hubert Des Marais of The Ocean Grand Hotel in Palm Beach, FL. At Des Marais’s All Truffle Dinner in December, the chef carried his fungus theme through to the dessert course, serving up scoops of white truffle ice cream. Poor also fared pretty well on the surprise scale at his Dungeness Crabfest in February, inducing diners to indulge in Dungeness crab ice cream. “I’ve gotten more attention for that ice cream than anything I’ve ever done,” he says with a chuckle. The Seattle native came up with the idea for the flavor when Chandler’s publicity department asked him to create a novelty ice cream for the restaurant’s annual six-week crabfest. Based on whiskey crab soup, the ice cream has received anything but a chilly reception. “You can’t imagine the number of people that come in here wanting crab ice cream,” says Poor. “We go through about 40 gallons through the festival.”

To make the ice cream, Poor takes two gallons of crab shell stock, adds a quart of bourbon, a quart of sherry, a pound of honey, and ¼ cup of vanilla extract, and reduces the mixture to a syrup. He then hands it over to a local ice cream maker who incorporates it into a vanilla ice cream base. What results is a rich, maple nut-flavored ice cream with few traces of its crustacean origins. “It’s kind of like Caesar salad dressing,” explains Poor, “You might not taste the anchovies in the dressing, but if you take them out, the dressing losses something. The crab ice cream doesn’t really taste like crab, but it’s the crab stock that supplies the flavor.”

Des Marais created his unique ice cream for a white truffle gala held at The Ocean Grand Hotel in November 1994. Des Marais adds a helping of white chocolate and truffle honey before running the mixture through an ice cream machine. To the finished product, he folds in sliced, fresh white truffles. “It tastes sweet,” says Des Marais. “You don’t think in your mind that it should be on top of a piece of meat. It’s still definitely dessert.” Alas, some conventions remain intact.

Here are some surprising ice cream flavors coming soon to the Beard House:

Want to try your hand at creative ice cream? Here are some outside-the-box flavors from our recipe collection:

July is National Ice Cream Month! Get the pint-by-pint on all our content here. 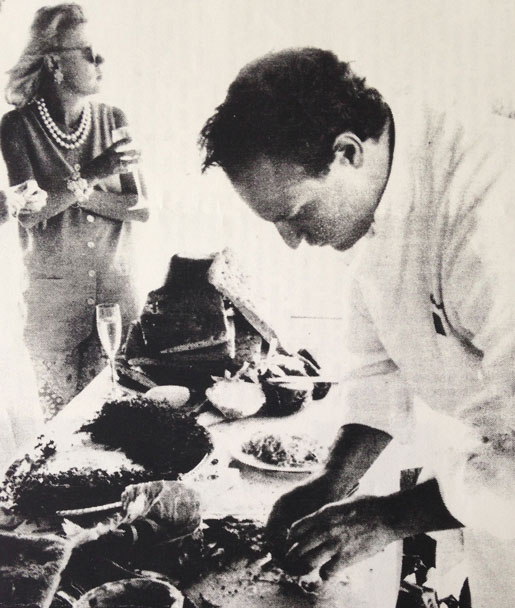