You Need to Dictate Your Own Narrative

When we say the James Beard Foundation is about good food for good, it’s not limited to sustainable agriculture, the Farm Bill, or reducing food waste. Another important aspect of our mission is highlighting the myriad hands that are helping to shape American cuisine. Below, Jackie Summers highlights the journey of Chefs Boot Camp alum Mavis-Jay Sanders from aspiring fine dining chef to educator and community activist at Brownsville Community Culinary Center.

It’s a sunny Tuesday morning at the Brownsville Community Culinary Center (BCCC), and Mavis-Jay Sanders is doing what directors of operations do: making sure the trash is picked up, checking the air conditioning ducts, ensuring hoods are being cleaned, and creating a curriculum for her students. The brainchild of restaurateur Claus Meyer and Lucas Denton, the B-triple-C is both the first sit-down restaurant to open in the Brownsville section of Brooklyn in half a century, and a world-class culinary work/study program (the latter being its mission).

It’s no secret Brownsville has a “bad reputation,” according to Sanders. “It’s all about who’s controlling the narrative. Google ‘Brownsville’ and you’ll see stories of violence—‘Brownsville do or die.’ Come to Brownsville,” she says, “and you will see rich history, culture, and proud people who take care of each other. You can’t let someone else dictate your narrative.”

Sanders is something of a maestro at conducting her own story. As a child growing up in Georgia, she discovered cooking was a path to distinguish herself amidst a large family. After graduating from Georgia Southern University and attending the Culinary Institute of America, she refused to let external expectations determine her fate: when she started applying for jobs as a chef, she was instead handed applications for housekeeping, despite holding degrees in restaurant and hotel management.

“I pursued fine dining, [but] I didn’t know anyone who could ‘get me in,’” says Sanders, referring to the dearth of mentorship for chefs of color. Her persistence eventually paid off, and she proved herself in the kitchen at Blue Hill at Stone Barns, followed by stints at Blue Hill and Untitled at the Whitney. Yet, something was lacking. She didn’t see herself or her culture represented in the food she was preparing. Moving to Los Angeles and working with Pico House (a food-truck based catering service) was her first major step toward career self-determination. Moving back to New York City to head operations for BCCC was next.

“The generation prior to me put real value on white validation,” Sanders explains. “Brownsville doesn’t need external validation. We looked inward. We refuse to buy into the narrative that Brownsville is a lost cause. We’re tired of people coming in not knowing anything about us, imposing their views on us, [and] trying to fix us. Instead of telling the community what they needed, we listened, and responded to their express needs.”

What the community wanted was education, jobs, and good food. BCCC was created to serve all of those needs, in a way that allows Brownsville to express its cultural identity. “We’re the only culinary program that focuses on the African diaspora,” says Sanders. “Here, you will learn French cooking techniques, with African foods. People care about where their food comes from. The truth of your heritage isn’t in someone else’s food.”

Despite being the birthplace of all mankind, Africa tends to be an afterthought in traditional culinary schools. This, according to Sanders, is why they are failing. “People are hungry for real knowledge,” she says. “[African food] history has largely been erased, but we’ve realized: we no longer need some random, generic, mediocre chef who’s been propped up as a celebrity to tell us we’re good enough. We’ve been good enough. We’re not taking that anymore.”

Through the BCCC, Sanders helps her community to define and care for itself. Participants receive eight months of training, including product identification, knife skills, and basic-through-advanced cooking techniques. They learn baking and culinary math, and are required to study for, and obtain, a food handler’s license before they can cook for guests. They’re taught financial literacy, communication skills, conflict resolution, coping skills, and the history of food. There’s even an on-site social worker to help students learn how to balance the real pressures of restaurant life. BCCC doesn’t just help their graduates find jobs—it shows them how to see themselves in positions of power.

“My goal has been to change the way people of color have access to food. BCCC is here to help build out opportunities, [and] to provide a space where historically marginalized people feel safe being vulnerable while they’re learning, knowing it’s okay to make mistakes,” says Sanders. “If the policies you’re putting in place aren’t going to be able to help people who are living on a budget, then it’s bullshit. I’m willing to be vocal about that, and making people uncomfortable is part of my focus. I worked hard to establish my own agency; any work that helps give others a sense of agency is something I stand behind. You have to tell your story. You can’t be successful telling someone else’s story.” 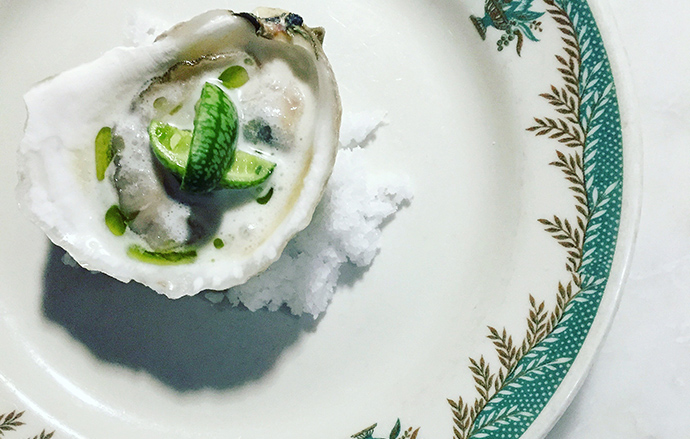