"This dish is so nostalgic for me. Every October I used to travel to Honey Pot Hill Orchards in Stow, Massachusetts, where the feeling of community, togetherness, and youthfulness were all very tangible. The coolness of the autumn breeze while standing in the middle of thousands of apple trees was intoxicating. Most of all, the apples themselves were just amazing. Very unlike the apples most are used to finding in the grocery store, these were sweet, earthy, grassy, and better than any candy bar or tub of ice cream on the shelf. The prep for this dish does take a lot of time, but it’s very much worth the effort." —Tyler Kinnett

Make the pasta dough: to do this the old-fashioned way, whisk the 2 flours together in a large bowl. Using your fingers, make a well in the center of the flour then pour the eggs and olive oil in. In a circular motion, run your finger on the outer edge of the egg mixture allowing the eggs to take in the flour slowly. Eventually the dough will come together. Once this happens, knead the dough until it feels stronger and more elastic, 2 to 3 minutes. Set the dough aside in a clean bowl covered with plastic wrap for about 30 minutes. (Note: if you feel mechanically inclined, use your tabletop mixer. The same principal applies: flour in the bowl first. Then, using the dough hook attachment, slowly drizzle in the eggs and oil and mix on low speed.)

Put a large pot of water on high heat and bring to a boil. Salt the water generously. Using a pasta roller or rolling pin, roll the dough out into thin sheets about 1/16- inch thick. After you roll the pasta out into a sheet, fold it over and roll it again. Do this 3 times. This lamination process will give your pasta a nice bite when cooked.

After you roll the dough out the third time, use a ruler and pizza roller to cut portions to either 3 x 4 inches or 5 x 6 inches, depending on how large you want the cannelloni to be. Place the portions into the boiling water and cook for about 1 minute. Shock the cooked pasta immediately in ice water. Remove and spread out on a sheet pan and reserve until ready to serve.

Make the braised pork: preheat the oven to 325°F. Generously season all sides of the pork with salt. Heat a large cast-iron or heavy-bottomed pan on high and add the oil. Heat the pan until the oil glistens and nearly smokes, but does not burn. Place the pork in the pan and do not move until a brown crust has developed, about 5 minutes per side. Carefully turn the pork in the pan and sear on all sides. Once seared evenly, place the pork into an oven-safe pot.

Using a wooden spoon or rubber spatula, gently scrape out the salt and oil into another pan and discard. Heat the same pan used to sear the pork over medium heat and add the onions. Scrape any brown bits with a wooden spoon, dissolving those bits into the onions. Cook until the onions soften and become transluscent, about 5 minutes. Add the carrots, celery, and tomato paste. Sweat the vegetables for about 2 minutes. Add the chicken stock and red wine and bring to a simmer. Pour the liquid over the pork in the ovenproof pot. Add the thyme, garlic, and bay leaf, cover, and braise in the oven for 2 to 3 hours. To check the doneness, gently try to separate the meat with 2 forks—if it separates easily, it’s done.

Allow the meat to cool at room temperature in the liquid. Once it has cooled (this should take about 1 1/2 hours) remove the pork. Strain the liquid through a sieve into a small saucepot and simmer over low heat until the liquid has reduced by half, about 10 minutes. Shred the pork gently and remove any gristle or fat not broken down during the braise. In a mixing bowl, combine the reduced liquid and the pork. Cool in the refrigerator.

Fill the cannelloni: if using fresh pasta dough, take a large spoonful of pork and place it horizontally on one side of the cooked pasta sheet. Tightly roll the pasta like a cigar and set aside until you’re ready to serve.

If using store-bought cannelloni, gently stuff a spoonful of pork into each shell. Starting from one end, use your finger to push the filling inside the shell so that the entire cannelloni tube is stuffed.

Make the apple butter: cut the apples in half, remove the core with a spoon, and leave the skin on. Dice them into large chunks. In a large bowl, toss the apples with the sugar and maple syrup and set aside for about 30 minutes. Place the apple mixture in a heavy-bottomed pot and cook for about 1 1/2 hours over medium-low heat. Make sure to stir the apples regularly to prevent sticking and to ensure even caramelization. The apples should dry slightly but not be so dry as to burn. If they are too dry, add 1/4 cup water to prevent sticking. Once the mix is cooked down to a dark brown, purée in a blender and transfer back to a clean pot. Bring the mixture to a simmer and stir in the lemon juice. Remove from the heat and let cool.

To serve: preheat the oven to 325°F. In a pan, bring a thin layer of chicken stock to a simmer. Whisk in a generous tablespoon of butter until the butter is emulsified. Place the stuffed cannelloni into the pan, cover, and place into the oven. Once the cannelloni are hot internally, about 25 minutes, baste the pasta with the sauce in the pan several times.

Meanwhile, heat a separate pan over medium-high heat. Add the last tablespoon of butter and griddle the brie gently until golden brown on both sides and gooey in the center, about 3 minutes. Do not burn! Rest the brie for a moment and cut into pieces.

To plate, place the hot cannelloni on the plate and scatter the griddled brie on top and around. With a small spoon, dollop the apple butter next to the cheese pieces. Decorate the plate with the sliced apples and serve quickly.

6 to 8 servings (about 14 filled cannelloni) 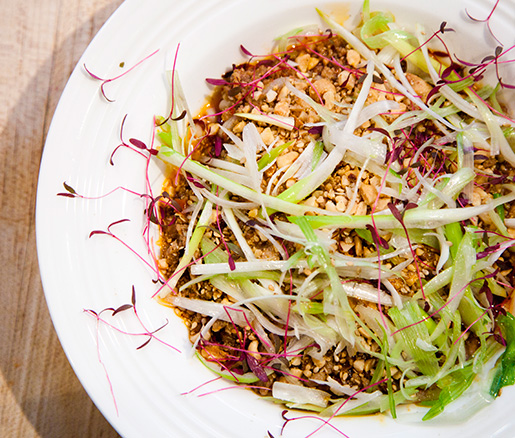