Marc Forgione makes these gourmet grilled cheese sandwiches with Pecorino Gregoriano, a raw sheep’s milk cheese from Abruzzo. You can find it at high-end grocers and cheese shops; you can also order it directly from its producer, Marcelli Formaggi. Brebirousse d'Argental, Hudson Red, Ardrahan, and Bellwether Farms Pepato are good substitutes.

In a medium pot, toast the coriander and cumin over medium heat until fragrant, about 1 minute. Add the sugar, figs, rice wine vinegar, tomatoes, cinnamon stick, and bay leaf. Raise the heat to high and cook until the mixture reaches a boil, then reduce the heat to low and simmer until it’s thick and jam-like, about 30 minutes. Let cool in the refrigerator for several hours.

Season the brioche on both sides with salt and pepper. Place 2 slices of the bread on the work surface, then layer 4 slices of cheese on each slice. Spread some fig ketchup on the other 2 slices of bread. Place the ketchup-topped slices, ketchup side down, on top of the cheese-topped slices to make the sandwiches.

Melt the butter in a skillet over medium heat. Add the sandwiches to the pan and grill until toasted and the cheese begins to melt, about 2 minutes. Flip and toast the other side until the cheese is thoroughly melted, about another 2 minutes. (Depending on the size of your skillet, you may have to grill the sandwiches one at a time.) Transfer to a paper towel–lined plate.

2 servings as a main course, or 8 as hors d’oeuvre 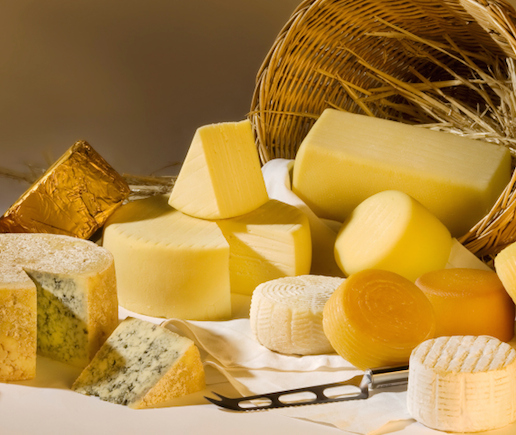