Chef Neal Swidler of Broussards in New Orleans served this decadent fusion of classic desserts at his French-Creole, Modern and Classic dinner at the Beard House. True to the event's name, this dish combines the Big Easy mainstay bananas foster, typically finished with a tableside flambé, with the traditional French make-ahead pot-de-créme. The combination is perfect for dinner parties, conjuring up all the familiar flavors with only a bit of assembly required before serving.

Make the pot-de-crèmes: sprinkle the gelatin over the water in a cold bowl. In a heavy gauge skillet, heat the butter with the brown sugar, cinnamon, and salt until the mixture has melted and the sugar has dissolved. Add in the banana liqueur and orange juice and mix together quickly. Move the skillet to side of the flame and add in the rum. Cook for a minute to burn off the alcohol.. Add in the mashed bananas and cook until tender, about 1 minute. Whisk in the heavy cream over low heat and allow the mixture to come back up to a simmer. Remove the skillet from the heat.

Melt the gelatin in the microwave or over a double boiler. Add to the banana mixture and whisk until smooth. Pour the mixture into 4-ounce ramekins. Store in the refrigerator and allow to set overnight.

Make the bread pudding: Preheat the oven to 300ºF. Spread the brioche on a baking sheet. Toast the brioche for 15 minutes to crisp it slightly.

In a saucepan, heat the cream and milk just until forming bubbles at the edge. Place the white chocolate in a large bowl and pour the hot milk–cream mixture over it. Let it stand for 1 minute and then whisk until smooth. Let it cool for at least 2 minutes.

In a separate bowl, whisk the whole eggs, egg yolks, sugar, cinnamon, and salt until creamy. Slowly pour the egg mix into the white chocolate, while whisking continuously until fully incorporated. Add in the crisped brioche and mix until completely covered. Pour the mixture into a standard loaf pan, wrap with plastic wrap, and place another loaf pan on top of the wrapped pan to compress the bread mixture. Allow to sit overnight in the refrigerator.

The next day, pre-heat the oven to 300°F. Remove the plastic and wrap the pan in foil. Place into the oven and bake until golden and firm in the middle, about 45 minutes. Remove from the oven and remove the foil. Bake uncovered for an additional 20 minutes to toast the top layer of bread. Remove from oven and allow to cool in the refrigerator.

Make the foster sauce: in a heavy gauge saucepan, melt the butter, brown sugar, salt and cinnamon. Heat the mixture until smooth, then pour in the orange juice and whisk until incorporated. Once the temperature begins to simmer remove the pan from direct heat and pour in the banana liqueur and spiced rum. Expose the mixture to the flame quickly to burn off the alcohol, then cook for 2 minutes, stirring until smooth. Whisk in the heavy cream and remove from heat for serving.

Assemble the dish: Remove the pot-de-crèmes and allow them to sit at room temperature for 30 minutes before serving.

Place 2 to 3 banana coins on top of each pot-de-crème, and drizzle each with foster sauce. Serve immediately. 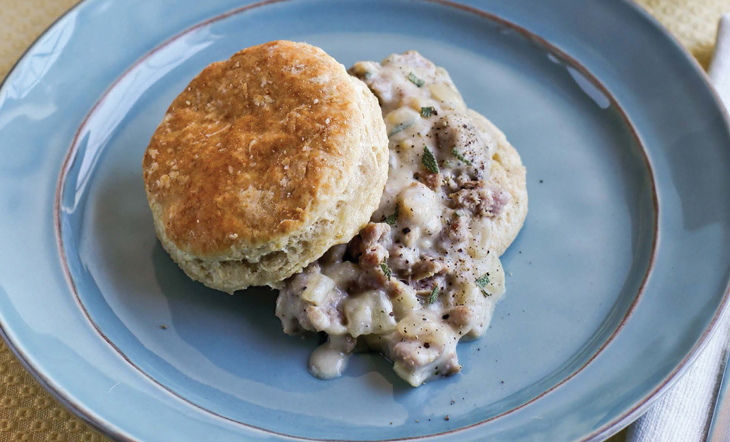