Barbara Fenzl thinks these crêpes are the perfect way to showcase the sweet, slightly nutty flavor of mesquite flour. The flour, which is made from grinding the dried pods of native Southwestern mesquite trees, is naturally gluten-free and plays off the salty-sweet notes of the pepita brittle that tops this dessert. When demonstrating this recipe to onlookers at Sur La Table in Phoenix for Taste America, Fenzl encouraged them to take a chance on the recipe’s homemade caramel, promising it’s not as scary as it sounds: “the secret to making caramel is not to touch it.”

Make the crêpes: in a large bowl, whisk together the flour, sugar, mesquite meal, and salt. In a glass 4-cup liquid measure, whisk together the milk, eggs, and melted butter. Gradually add the liquid mixture into the dry mixture until the batter is smooth and all ingredients are well incorporated. Pour the batter back into the liquid measure and allow it to rest for at least 30 minutes.

Heat an 8- to 10-inch non-stick skillet over medium heat. Pour about 2 tablespoons of the batter into the hot pan and using your wrist, swirl it around until it covers the bottom of the pan. Cook until the bottom of the crêpe is golden (about 3 minutes). Flip the crêpe over and cook until the other side is golden brown, as well. Flip the crêpe onto a dinner plate and repeat with the remaining batter, stacking the crêpes on top of each other as they are cooked. You should have 16 to 20 crêpes. Cover the plate with plastic wrap and refrigerate for up to 2 days or freeze for up to 6 months.

Make the apple filling: heat the butter in a large skillet over medium-high heat and add the apples and sugar. Cook, stirring frequently, until the apples are softened and slightly brown, about 10 minutes. Carefully add the Calvados and cook 1 minute more. Set aside.

Make the Calvados cream: in a medium chilled bowl, combine the mascarpone, heavy cream, sugar, and Calvados. Using a hand mixer, beat at medium speed for 1 to 2 minutes or until soft peaks form. Cover the cream with plastic wrap and refrigerate until needed.

Make the pepita brittle: preheat the oven to 350°F. Arrange the pepitas in a single layer on a baking sheet and toast until lightly browned, about 10 minutes. Grease a sheet tray or line a sheet tray with a silpat and set aside. In a medium-sized heavy saucepan over high heat, cook the sugar and water until the sugar is dissolved and has turned amber in color. Add the butter and stir in the toasted pepitas. Remove the pan from the heat and pour the brittle out onto the greased sheet tray or sheet tray lined with a silpat. While still warm, sprinkle the brittle with flaky sea salt and let cool completely. When the brittle has hardened, finely chop with a chef’s knife or put it in a plastic bag and pound it with the bottom of a heavy pan until crushed.

Make the cinnamon syrup: in a medium-sized heavy saucepan, melt the sugar and water together over high heat. Stir in the maple syrup and cinnamon sticks and bring to a boil. Reduce heat to low and simmer until the syrup is reduced to 1 1/2 cups, about 20 minutes. Cool and remove the cinnamon sticks. This can be made 1 week ahead, covered and refrigerated.

Assemble the crêpes: spread 2 tablespoons of the Calvados cream on each of the crêpes and spoon a few tablespoons of apple filling on top of the cream. Sprinkle some brittle on top of apples and fold each crêpe into quarters. Place 2 crêpes on each dessert plate and drizzle with the cinnamon syrup. Sprinkle with any remaining pepita brittle and serve. 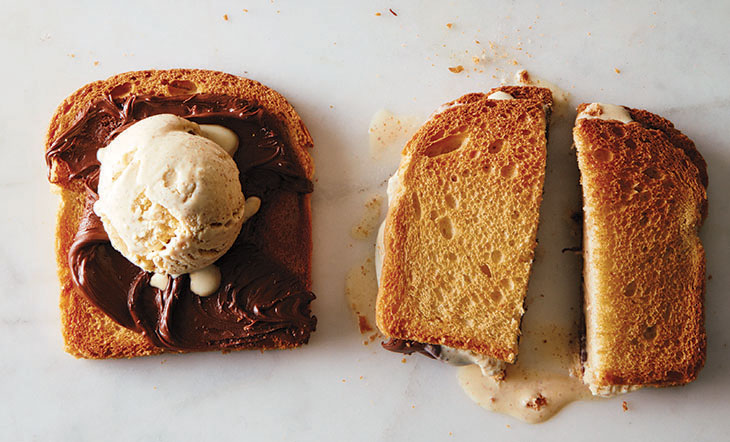 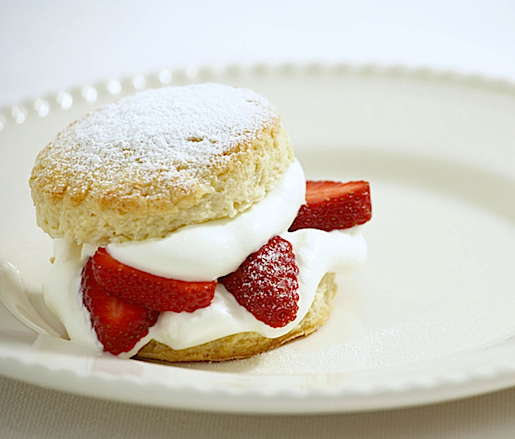