Owners: Elizabeth and Dixon Dedman, and Helen and Chuck Dedman

Founded by Glave Goddard and Annie Bell Goddard in 1917, the Beaumont Inn, which opened for business in 1919, is still operated by their descendants. Set in a former women’s college built in 1845, the Beaumont main house is columned and formal. And the menu is deeply rooted in Kentucky. The Dedman family, now at the helm, serves Kentucky products with pride, including Weisenberger meal, Meacham hams, and bourbons from the best distillers in the state. Recipes for dishes like corn pudding and fried chicken, handed down through five generations, form the core of the menu. As their forebears did, the Dedmans serve two-year-old country ham, which they bring to maturation in their own aging house. Little has changed since the days when the pioneering critic Duncan Hines was a regular. “Now write this down for the people in Kentucky,” he told a reporter back in 1949. “[Say] I’ll be happy to get home and eat two-year-old ham, cornbread, beaten biscuits, pound cake, yellow-leg fried chicken, and corn pudding. And you can say what I think is the best eating place in Kentucky: Beaumont Inn at Harrodsburg.” 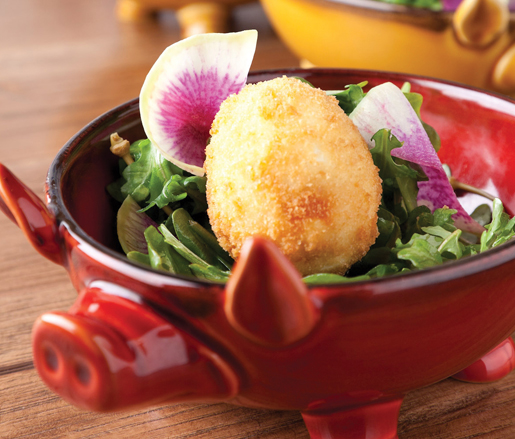