"If everybody in the country gave me a dollar, I could eliminate hunger.” Few eight-year- olds think these kinds of thoughts, but it’s exactly what a young Denise Cerreta pondered in the yard of her family’s home in Canton, Ohio, and it would also lead to a pioneering model for addressing food insecurity.

What would become Cerreta’s “community cafe” movement began in downtown Salt Lake City, where, at the acupuncture clinic that she owned and operated, she started to wonder what else could be done to help her ailing customers. “I began to think that some of my clients were not sick, but lonely. They came to me for a lot of treatments, when they really might have been better off just getting a cup of coffee in a nice environment,” she says.

In 2003, without any restaurateur experience or formal culinary training, Cerreta closed her clinic, hired a small staff, and opened One World Cafe in the front of the same building that had housed the acupuncture business. Like her prior line of work, running the cafe honored her personal values. “I have always been trying to help people, and I made a commitment in my early 20s to follow my spiritual path,” she says. “In order to grow I needed to close my clinic,” she recalls. “So, by default, I went to work cooking and serving…trying to make rent because I didn’t know what I was going to do.”

She offered a menu of healthy, organic food to her local customers, who had some of the lowest income levels in the city. After a few months of business, she had what she calls a “Field of Dreams moment”, based on the movie she has now seen more than 40 times. “I heard it with my spiritual ears: let people price their own food,” she recalls. She tried it out on her next customer. “At that moment, I felt my heart expand.”

Cerreta fine-tuned her pay-what-you-can concept over time, adapting to economic changes as needed. She posted a suggested range of prices for her offerings, deregulated portion sizes as she became more mindful of food waste, and even began accepting volunteerism as payment. From elderly patrons, Cerreta accepted prayer in exchange for a meal, and she adopted a “kids eat free” policy after three children approached the counter and asked for something to eat. When two food-insecure parents asked if the cafe could host a birthday party for their child, Cerreta did so at the price they could pay.

As One World Cafe started getting press, Cerreta started hearing from individuals who wanted to adopt her practices at their own establishments. On her own dime, she began traveling the country and helping others replicate her pricing model. In 2006 she formally established the nonprofit One World Everybody Eats (OWEE) and, a few years later, left the Salt Lake City cafe to devote more energy to growing the organization, mentoring its members, and leading an annual summit. Today more than 60 cafes throughout the United States belong to OWEE and collectively serve an estimated 1.4 million meals each year.

“Through her spirit and the organization she has founded, she has changed thousands and thousands of people’s lives for the better, both those with food insecurity and those who can afford to assist their neighbors,” says Frederick A. Miller, an OWEE board member. “She has done so through a process that adds dignity and love to sharing.”

The organization is also dedicated to paying its staff a living wage. “Throughout the years, I have been and will continue to be employed or volunteer in different restaurant positions or minimum-wage positions,” says Cerreta. “I feel it is so important to understand a living wage versus a minimum wage firsthand and to have friends with these issues, to hopefully provide solutions as a social entrepreneur.”

Member cafes are individually owned and operated, and Cerreta considers each one to be its own unique establishment. “I believe the initial One World Movement is a direct reflection of Cerreta’s vision that each community has to be organic in creating a cafe that meets the needs in its own backyard,” says Renee Boughman, executive chef of F.A.R.M. Café in Boone, North Carolina.

Even with OWEE’s success, Cerreta remains grounded. “She continues to live a surprisingly simple lifestyle that’s focused on compassion, honoring the earth, and each person’s path, which keeps her in touch with the gaps in our societal networks,” says board member Rev. Dr. Christina May, who authored a scholarly publication on the pay-what-you-can model. “To me, Denise is a true visionary, in the traditional and historic sense of the word.” 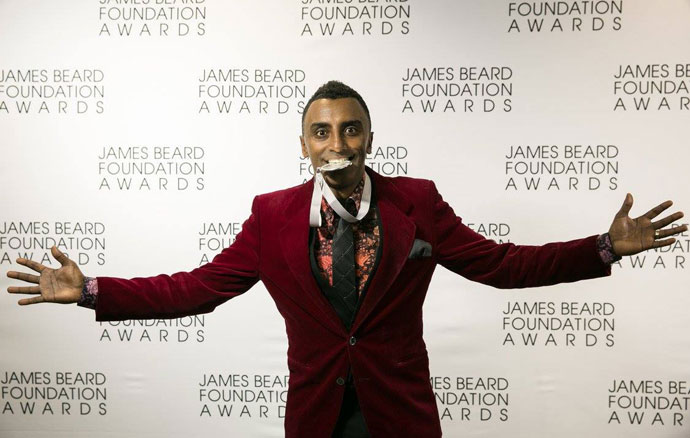 The 2016 Beard Awards in Photos