Grace Young is on a mission to save Chinatowns

This Humanitarian of the Year Award is given to an individual or organization working in the realm of food who has given selflessly and worked tirelessly to better the lives of others and society at large. As part of the Award, the honoree will receive a cash prize of $20,000, thanks to the Michael Phillips Humanitarian Fund. Grace Young has been recognized as 2022 Humanitarian of the Year for her work to save America’s Chinatowns amid Asian American and Pacific Islander (AAPI) hate during the COVID-19 pandemic.

A San Francisco native, Grace Young grew up eating her parents’ home-cooked Cantonese food. At age 11, she discovered Julia Child and immediately fell for French cooking. At 13, Grace began an apprenticeship under well-known French cooking teacher, Josephine Araldo. This blossomed into a full-fledged career in food and recipe testing, including a 17-year-run as a test kitchen director for Time Life Books in New York City where she produced over 40 cookbooks. But as Grace got older, her roots called her home.

“I had been so interested in everything that wasn’t Chinese,” Young says. “I decided to go cook with my parents, my uncles and aunties, and family friends. That became my first cookbook, The Wisdom of the Chinese Kitchen.” Young went on to release two more award-winning cookbooks: Breath of a Wok in 2004 and Stir-Frying to the Sky’s Edge in 2010, which won a James Beard Award. But as she set out to write her fourth book in early 2020, everything changed due to COVID-19.

“By January, Chinatowns all across the United States were shunned due to misinformation and xenophobia,” she says. It wasn’t just her hometown of New York—historic Chinatowns from Boston to San Francisco were, and still are, suffering.

On March 15, 2020, Grace visited New York City’s Chinatown with videographer Dan Ahn to interview restaurant and shop owners. She’d heard that business had dropped by 40 to 80-percent in January and February due to misinformation and racist rhetoric surrounding COVID-19.

“I still remember the looks on the faces of cooks, dishwashers, waiters—everybody knew we were in trouble,” Young recalls.

“It was the last day of Chinatown as we think of it,” she said. “We were in the middle of living history.”

Young turned the footage into a video series, Coronavirus: Chinatown Stories, in partnership with Chelsea museum Poster House. The first five videos show New York’s Chinatown hours before the lockdown. The short videos are filled with emotion and frank conversations with business owners about the fear not just of losing their life’s work, but about anti-Asian hate and violence impacting them and their employees. To many, closing felt safer than staying open. The six subsequent videos continue to tell the story after the pandemic had taken hold.

Since then, Grace has put her energy into helping America’s Chinatowns and AAPI-owned mom-and-pop businesses. Dubbed the 'accidental voice' of NYC's Chinatown, Young has since been raising awareness about anti-Asian hate’s impact on the AAPI community and the plight of historic Chinatowns in news outlets from The Washington Post to Vogue. In late 2020, Young and the James Beard Foundation launched the #savechineserestaurants campaign, which encouraged people to support their local Chinatowns and Chinese restaurants on social media. In partnership with Poster House and the James Beard Foundation, the campaign evolved to #LoveAAPI in 2021, with a mission of combatting hate while supporting AAPI-owned businesses across the country. “The best way to fight hate is to show your love,” she says.

Providing direct support to her community, Young partnered Welcome to Chinatown to create the Support Chinatown Fund in 2021. Raising more than $40,000, the fund provided 4,000 hot meals for Chinatown’s elderly, food insecure, and low-income neighbors. She also partnered with Asian Americans for Equality to raise $25,000 for 7,000 personal security alarms for seniors and workers worried about their safety.

Young doesn’t know what the future holds but says we’re at a “critical point.” As New York’s Chinatown is trying to recover, businesses are contending with supply chain issues and inflation. “Some food costs have doubled. Energy bills are up 30-40%. They still don’t have the business they had pre-pandemic, and debt is mounting from back rent and bills. There are so many challenges in front of them right now. It’s a miracle that there is still a Chinatown,” she says.

And as violence against AAPI communities continues, she explains, some locals are afraid to come to work, shop, or dine in Chinatown. “Without our support, we could lose historic Chinatowns and other AAPI enclaves around the country,” she says.

To continue to support AAPI communities, Grace relays this important message: "Chinatowns and AAPI mom-and-pop businesses need us to dine in, order takeout, and shop in markets, bakeries, and stores, regularly, if they are to survive."

Learn more about the 2022 James Beard Awards presented by Capital One.

Sarah Maiellano is an independent journalist based in Philadelphia. She also co-hosts the podcast Delicious City Philly. Find more of her work at sarahmaiellano.com and follow her on Instagram at @sarahmaiellano. 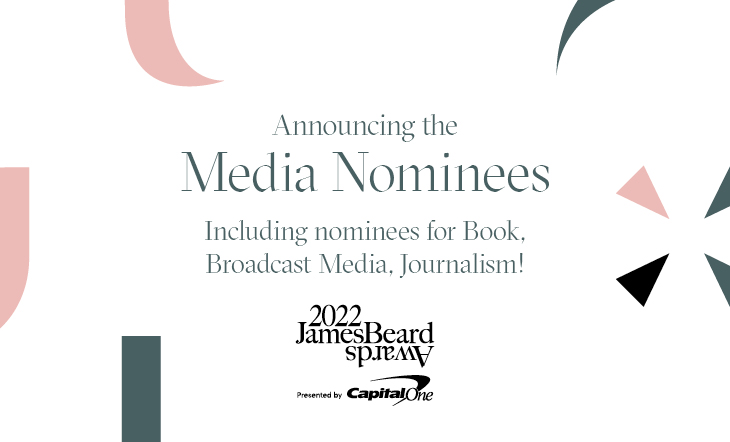 Here are the 2022 Media Award Nominees