For more than 15 years, the James Beard Foundation has honored some of the country’s most beloved regional restaurants with its America’s Classics Awards. These establishments, often family-owned, are treasured for their quality food, local character, and lasting appeal.

In anticipation of our announcement of the 2013 inductees, we’re unlocking the America’s Classics vault and checking in on some past winners. Next up is White House Sub Shop in Atlantic City, which was named an America's Classic in 2000. (Read our update on Maine's Waterman's Beach Lobster here.)

How did White House Sub Shop, situated only three blocks north of the Atlantic City boardwalk, weather Hurricane Sandy? “We didn’t,” remarks owner Brian Conley. His cellar flooded, the refrigerator failed, and the electrical system crashed. But in just two months Conley has installed a new floor, ordered weatherproofed equipment, and refaced the sixty-five-year-old orange booths. The look and feel of the shop survives—just, as Conley puts it, “fresher.”

Even while the original Arctic Avenue shop rebounded, fans could still get their sub fix at an unlikely outpost—in the Trump Taj Mahal casino. Mark Juliano, now the former CEO of Trump Entertainment Resorts, grew up eating at the original joint. He approached Conley with an offer to set up a second shop along Spice Road, the hotel’s dining promenade. The expansion has copied its predecessor's orange palette and massive menu board, though its customers order their meals at a counter and take their food to go, while the original shop offers waiter service. After a night at the tables or slots, gamblers can spend their winnings on made-to-order breakfast sandwiches. The new spot also offers hot soup and French fries by the pile.

Whichever location you visit, Conley promises that the subs still taste fantastic. A Philadelphia-based Italian meat purveyor has been supplying his business for more than fifty years, while the beef fillings come from a longtime New Jersey farm. But many fans insist that the most crucial ingredient is the hearty Italian bread, which is delivered five to six times a day from bakeries across the street and down the block. Some regulars, claiming a talent for distinguishing one baker’s roll from another, request a certain bread with their order. The chosen roll is scooped out and stacked with any number of fillings, from the deli meats and cheeses of the White House Special to the popular mayo-free albacore tuna. Leftover bread scoops are destined for homemade meatball mix.

Now that the original White House is fully up and running, its customers can rest assured that the humble spirit of this Atlantic City icon will remain for years to come. Just don’t expect any more new locations. When asked if the White House brand might further expand, Conley responded, “That’s like asking whether I want a second or a third marriage.” 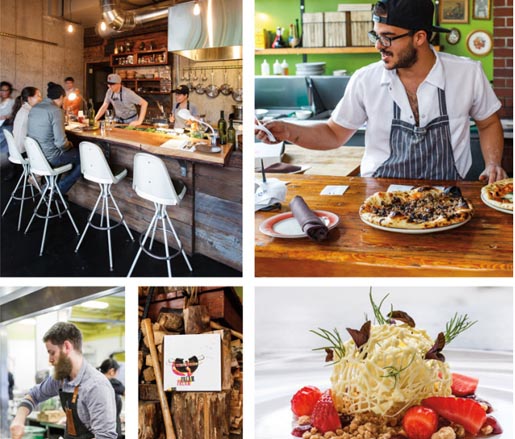