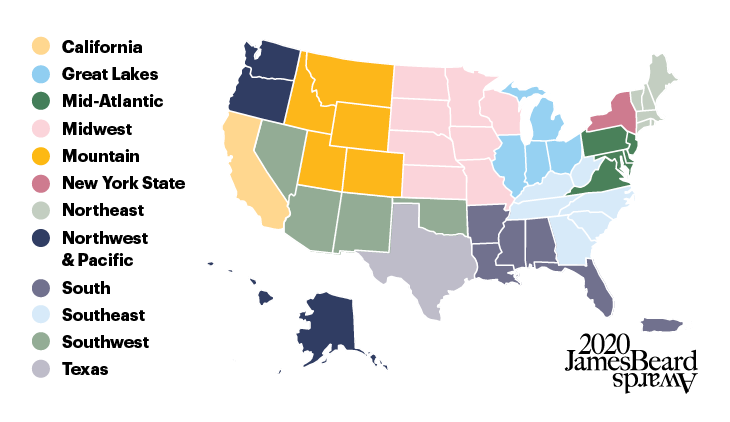 Sure, there are distinctions that go deeper than the Hellmann’s/Best Foods mayonnaise divide. History plays a part. Politics, too. Local communities of farmers, chefs, cooperative extensions, businesses, and nonprofits are helping to revitalize regional foodsheds in an effort to combat problems from food insecurity to environment degradation to gastronomic tedium. American culinary distinctions are more likely to follow immigration patterns and business trends than geography or social history. Still, at a certain level, American restaurants from city to city tend to be more alike than different.

Which brings us to the challenge of defining the regions that constitute the James Beard Foundation’s Best Chef Awards. Without clearly defined and generally accepted cultural or political boundaries, we are left to review data and make determinations that are, quite frankly, more art than science. This year, we are announcing some significant changes to how we divide up the nation for these important awards. You could sum up the underlying rationale for these changes as an acknowledgment that America’s food culture continues to explode.

Tweaks to James Beard Best Chef regions are nothing new. Every few years, with the help of demographers who analyze current population and hospitality industry data, as well as an ear to the ground about what culinary communities are burgeoning where, we revisit the division of states into regions. Usually this review results in a tweak to which states go where. The last time we made changes was in 2012.

Beginning now, we are expanding the number of regions, taking them from 10 to 12, which we haven’t done since shifting from 8 to 10 in 2007. After considerable input and analysis conducted with the help of data experts at RMS, a restaurant consultancy based in Tampa, Florida, we are (re-)introducing stand-alone states as their own regions. Both California and Texas have massive and growing populations, not to mention significant restaurant density. You could argue they have unique cultures, too, elements of which help distinguish their food. Certainly, each state has within it multiple and dynamic restaurant communities that create notable internal competition and support a regional designation. (Note: from the launch of the Beard Awards in 1991 until 2007, California had previously been its own region.)

On the other side of the country, we are establishing New York State as its own region, combining the five boroughs of New York City—which have stood alone as their own region since the second Beard Awards were handed out in 1992—with the rest of New York State, which until this year was part of the New England region. While the city’s food culture remains vibrant and dynamic, it is no longer the only or the best gastro game in town. To recognize the incredible depth and diversity of dining in cities in other regions across the country, we are beginning to level the playing field.

There are a few additional consequences of this redistricting, namely, the creation of the new Mountain Region, whose geography does distinguish it from other parts of the country. New regions also require new Restaurant and Chef subcommittee members to represent those areas, additional judges, and the expansion of our America’s Classics Awards to six per year (from five).

Of course, we will continue to monitor changes to population data and the evolution of dining culture in these 12 regions going forward. We take all feedback into consideration, and before anyone else says it, please note, we are already monitoring data for Illinois and Florida. Redistricting is only one tool in our toolbox to ensure fairness, inclusivity, and transparency. We are constantly reviewing the geographic distribution of judges, the participation rates of voting panels, conflicts of interest policies, accounting practices, and other parameters that help ensure fair and balanced results.

For the complete explanation of policies and procedures that govern the James Beard Awards program, visit the Awards section of our site. If you have any specific questions you want answered, tune into our Reddit AMA on Wednesday, 9/18 at 12:30 ET. And you can always email us at awards@jamesbeard.org.

Thanks to our dedicated, all-volunteer committee members and judges. And good luck to all eligible and worthy candidates. We hope to see you at the Awards festivities in New York and Chicago in 2020 as we celebrate the James Beard Awards’ 30th anniversary.

Read more about these changes in the full press release. 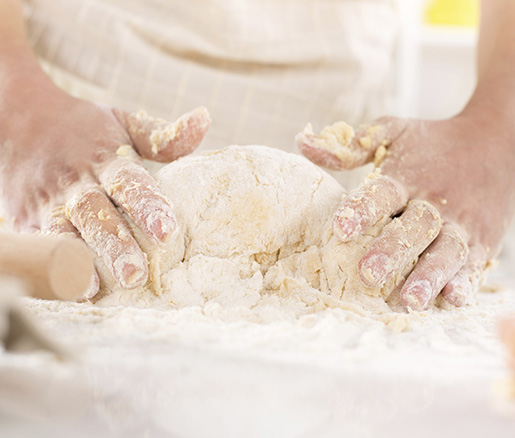 UPDATED: How to Get Ready for the Restaurant Revitalization Fund