Chef Beverly Kim’s lifelong love affair with cooking, from her mother’s kitchen to the heights of Chicago’s dining scene

Below, Rachel Tepper Paley shares the journey of James Beard Award–winning chef Beverly Kim, from a childhood spent helping her mother in the kitchen to stints in some of the hottest restaurants in Chicago, including her very own.

During chef Beverly Kim’s childhood in Downers Grove, Illinois, a pair of large refrigerators brimmed with jars in the basement of her home. In each, vibrantly colored vegetables fizzled and burped, the bubbly result of the fermentation process required to transform pedestrian cabbage into pungent, chile-flaked kimchi. The suburbs of Chicago are known for many things, but top-notch Korean food is generally not among them. Yet that’s what defined Kim’s childhood, providing a culinary backbone to her future life as the James Beard Award–winning chef/owner of Chicago’s Korean-inflected hot spot Parachute.

“They really brought Korea with them,” Kim said of her parents, who immigrated from Korea in their 30s. At school, Kim participated in the hallmarks of suburban childhood in the Midwest, even earning a spot on her school’s cheerleading squad. But at home, much time was spent assisting her mother in the kitchen.

“It was a very traditional Korean family structure where dad works and mom cooks pretty much everything from scratch, and we had a large family,” Kim said. Multiple pots burbled on the family stove at any given time, conveying hearty stews like her mother’s go-to cheonggukjang jjigae enriched with fermented soybeans. Salty-sweet specialties like marinated short ribs adorned the dinner table on special occasions. Kim relished every bit of it. “I guess I just was always sort of a lover of being in the kitchen,” she said. “And I had a natural inclination for serving.”

At 16 and still in high school, Kim took a shot in the dark and wrote a letter to James Beard Award–winning chef Sarah Stegner, then the executive chef at the Ritz-Carlton, Chicago. After months of pestering, she earned an internship in Stegner’s kitchen.

“Being a child of immigrants, you learn how to do a lot of things yourself,” she said. Working in the Ritz-Carlton kitchen opened Kim’s eyes to an entirely different side of cooking. “My mom was a really good cook, but this was the first time I saw how culinary is an art form,” she said.

After a stint in culinary school, Kim returned to the Ritz-Carlton before heading to the kitchen of the late famed chef Charlie Trotter. The hours were long, the work grueling, and the pay minimal—all things that concerned Kim’s parents. “They literally thought I was being taken advantage of,” she recalled. Kim struggled with it, too: “It was a very tough place to work, to say the least,” Kim said. “You can have someone who's really inspiring in terms of what they've done for the food world, but behind the scenes things could be very different.”

Mentally and physically burned out, she ditched restaurants for the catering business. But two years later, her old boss Sarah Stegner came calling, asking Kim to join her new restaurant, Prairie Grass Cafe. Reinvigorated, Kim spent the next few years ping-ponging around Chicago-area restaurants, working her way up the culinary ladder. In the midst of it all, Kim met and married fellow chef Johnny Clark, giving birth to their first child in less than a year. Kim’s parents, though, remained unconvinced that she was on the right professional track. Then, in 2011, everything changed.

“It really took them 10 years. When I was finally on Top Chef, my parents understood that I actually can make something of myself,” Kim said. Kim finished in fourth place—catapulting her onto the national stage. In the aftermath, Kim and Clark decided to open a restaurant that married their shared love of traditional Korean food with their high-end culinary backgrounds. When the pair struggled to find financing, Kim’s parents—now fully behind her—came to the rescue with a $100,000 loan.

The gamble paid off, and Parachute opened in May of 2014. The next year, the restaurant was a James Beard Award finalist for Best New Restaurant. “We call it food with a Korean-American perspective,” Kim said. Asian-inspired dishes like ruby-red flank steak with leeks and black beans share space with crunchy pork katsu, while dessert offerings include modern spins on Korean classics like the shaved ice dish patbingsu.

More than awards or financial stability, success for Kim has meant creating a sustainable work environment for her employees. The restaurant guarantees paid time off and healthcare, and is closed every Sunday and Monday. Grueling 18-hour days are forbidden, and a human resource department enforces strict rules about discrimination and sexual harassment.

“It's hard!” Kim said, laughing. Not that she’d have it any other way. “I think being a parent has taught me how to be better at controlling my emotions,” she continued. Patience, she’s learned, is key in both restaurants and childrearing.

“A restaurant is not on autopilot, ever, and same thing with your kids,” she said. “Once you accept that and understand that, I think you can go really far in this business.” 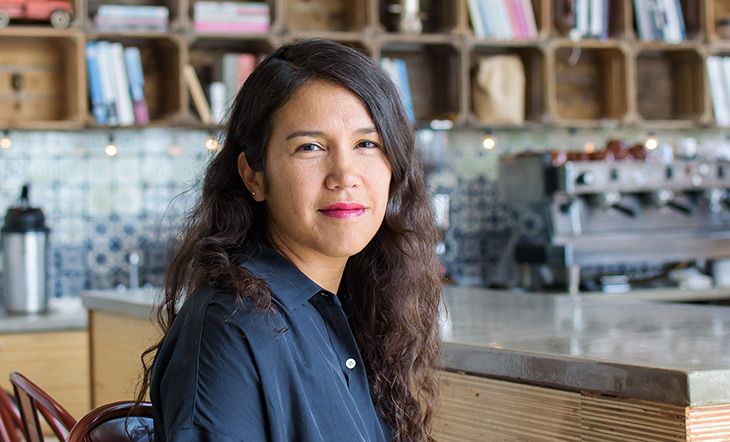 An Empire Built on Love and Gelato