Asking us to pick our favorite dishes at the Beard House is a little like asking a mother to pick her favorite child, but to give you a taste, here are a few decidedly summery highlights served up during the month of June. Could a sandwich truly make someone renounce their citizenship? Prior to a few weeks ago, I would never have thought so. But then I was served the Montreal short rib at Yehuda Sichel’s Beard House dinner, and suddenly I found myself questioning the appeal of the stars and stripes and pining for maple syrup. The dish matched simplicity with elevated technique, served family-style but composed of handcrafted components (with the exception of Gulden’s Mustard, which Sichel thinks is incomparable). Tender slices of short rib crusted with a deep, caramelized bark, homemade cucumber salads and beet coleslaw, apricot honey, and that inimitable mustard intermingled on house-baked rounds of rye bread. Thankfully, I don't have to give up my passport just yet, as Sichel's short rib is available only a bus ride away in Philadelphia. Just don't tell the Liberty Bell that my stomach's singing "O, Canada." How do you capture the essence of a comforting, stick-to-your-ribs, truffle-topped wintery dish while utilizing peak summer produce and keeping it all light as air? You turn to Casa Luca's Erin Clarke, apparently. When an all-women group of D.C.-area power players came to the Beard House on a delicious diplomatic mission, we were braced for a meal of epic proportions. While everything the team churned out was enough to get me planning my next trip to our nation's capital for a repeat performance, there was one particular dish that I just can't keep my thoughts from drifting back to: Clarke's dreamy, bright agnolotti filled with sweet summer corn, floating delicately in a gentle pool of ham hock consommé, and garnished with heirloom green tomatoes, crunchy toasted hazelnuts, earthy black truffles, and even some dainty edible flowers—lest we forget that it's summertime and we should be frolicking outside. How does minestrone get dressed for summer? Chef Josh Evens of San Francisco's Tosca Cafe lightens the rustic soup with peas, zippy basil pesto, and a generous pour of grassy olive oil. I’ll be thinking about this surprisingly refreshing dish for the rest of the season, and even most savage heat wave won’t stifle my cravings.

View all upcoming Beard House event menus and book your seat at jamesbeard.org/events. 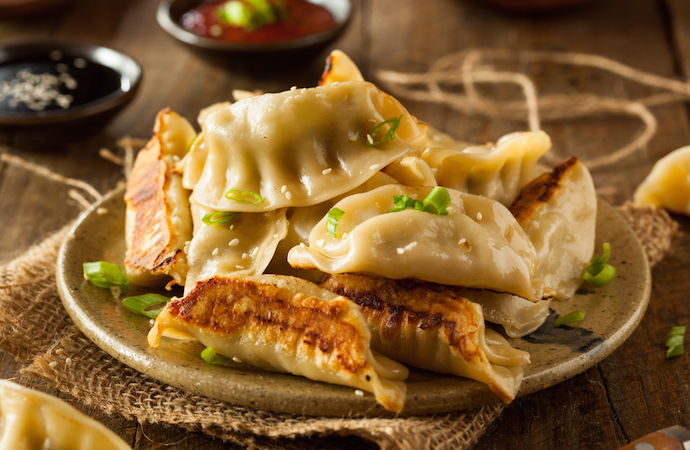