The James Beard Foundation is committed to supporting women in the food and beverage industry, from chefs and restaurateurs to entrepreneurs dreaming up new ways to make our food system more diverse, delicious, and sustainable. Our Women’s Leadership Programs (WLP) presented by Audi, provide training at multiple stages of an individual’s career, from pitching your brand to developing a perspective and policy on human resources. As part of the Foundation’s commitment to advancing women in the industry and Audi’s #DriveProgress initiative, we’re sharing stories from female James Beard Award winners, Women’s Leadership Program alumni, and thought leaders pushing for change. Through #DriveProgress, Audi is committed to cultivating and promoting a culture that enables women to achieve their highest potential by removing barriers to equity, inclusivity, growth, and development

Elle Simone, a culinary producer and food stylist for America’s Test Kitchen shared her insights on building her career and her business on a panel at last year’s Women’s Entrepreneurial Leadership program. Below, Simone, who is also the founder of SheChef, a culinary mentorship and networking community for women of color and their allies, reflects on the power of media outlets to control the narratives around the history of our foodways, and how that affects who has a voice in the current dining scene.

In July 2015, FoxNews.com listed 12 of “America’s Most Influential BBQ Pitmasters.”  It consisted of ten men and two women, all of them white. This list, with its lack of regard for the fore-parents of pit cooking, not to mention the legacy of barbacoa and other indigenous cooking methods, raised many an eyebrow in the Black culinary community. Not long after, op-eds questioning, “where are the Black chefs?” began to circulate, as if to imply that if we are not mentioned in media, we must not exist. To some degree, that’s not a completely false notion.

As the founder of an organization whose entire premise is to keep a finger on the pulse of women of color in the culinary community, I am held to the task of reading about, reaching out, and staying in the know of current industry happenings.

It’s my daily practice to check my social media communities, as this seems to be the outlet for most: the places where we settle our differences, express our disdain, and share our joys and successes. It’s in these spaces that I find myself inundated with compilations of the food and beverage industry’s “top” and “best.” Although these lists hold the names of some talented individuals, they are often limited in the most detrimental of ways: lacking representation in terms of gender, ethnicity, and the intersectionality of those areas. This is just one of many ways the media uses its influence to maintain the invisibility of cultural and regional cuisines.

When the act of willful omission is perpetuated by a dominant culture, especially in the 21st century, it strengthens the kinds of “institutional racism” that place real obstacles in the way of women and people of color. Business capital becomes difficult to obtain, food shaming becomes the norm, food deserts proliferate, and women and people of color suffer from cultural identity theft. And the white chefs who cook food with non-white historical origins? They get to claim “cultural appreciation” instead of appropriation.

Gordon Nagayama Hall, professor of psychology at the University of Oregon, argues that the difference comes down to power. The media has the power to establish who gets recognition and for what. If you don’t have the financial prowess to control your own media, marketing, and PR, you’ve got no power.

Hall states, “Cultural identity theft can be harmful because someone else takes control of a person’s culture…[and so] low self-esteem occurs. [If] it has involved a loss of land, culture, and identity, this is known as historical trauma. The effects of historical trauma include poor physical, psychological, and spiritual health.”

The American culinary world owes a great deal to the contributions of African, African-American, and other diaspora communities, but most of this influence occurred during the oppressive era of slavery. One clear consequence of this history is the negative stereotypes that developed around female African-American domestic workers, especially those who worked in the kitchen. In Toni Tipton-Martin’s James Beard Award–winning book, The Jemima Code, she discusses how the African-American woman’s culinary contributions were often credited to the white women for whom they worked. Tipton-Martin mentions that one challenge she encountered during her research of historical cookbooks was that throughout American history, ”black people have had less access to publishing than whites.”

In 2019, there’s still a lot to be said (and questioned) about the media, the power it holds, the responsibilities that come with that power, and how women chefs of color are coping with lack of representation.

Chef Sarah Kirnon, a Bajan native and owner of Miss Ollie’s in Oakland, California, knows first-hand the effects of the “one-two punch” of cultural identity theft and media-substantiated cultural invisibility. After surmounting the myriad challenges around acquiring capital funding and building community support, Kirnon was able to open Miss Ollie’s in 2012. “I was not the first person of color to open a restaurant [here],” she notes, “so I [made] sure to pay homage to those who came before me.”

Kirnon frequently travels back to her homeland of Barbados so that she can remain inspired and assure her devoted clientele that their dining experience is purely authentic. From the warm, Caribbean-inspired décor to the curated rum bar experience, Miss Ollie’s is undoubtedly Kirnon’s life and culture on a plate.

Well, as the old adage goes, “imitation is the sincerest form of flattery.” Or is it? On January 8, Eater San Francisco published an article announcing a newly opened restaurant in the city to be  “a quietly revolutionary rum bar with Caribbean food.”

Kirnon rolls her eyes as we linger over the use of the word “revolutionary,” since some of the restaurant’s lauded choices are simply mimicking the signature, subtle nuances of Kirnon’s cooking, according to her frequent diners. “I was shocked but not surprised,” said Kirnon. “When I heard the restaurant concept was opening, I reached out in an effort to be of service, you know, for the sake of authenticity, but got no response. When we finally connected, [the chef] shared that he was inspired by my cuisine, yet he made no mention of Miss Ollie’s in the article or press release. All chefs [are allowed to] find inspiration, but we are not to copy another chef’s approach!”

Kirnon and I spent more time discussing how to effectively express disdain over being written out of the culinary and cultural narrative, especially when the effects of our ancestors never being compensated properly (if at all), nor given credit for their talents and genius are still being felt today. We also talked about the frustration and crippling of confidence in face of the scrutiny that comes with opening a restaurant and obtaining capital as a black woman and an immigrant.

Some culinary politicos may argue that “food belongs to everyone,” but by saying that, we’re excusing the willful diminishment of major players in the history of Western culture who fundamentally influenced the way that we have come to learn about and eat food. From the packed satchels of those that passed through Ellis Island to the many African women who braided rice grains and seeds into their hair before journeying the Middle Passage, the act and purpose of preserving culture through food is timeless. What we eat and how we cook is a direct correlation with how we self-identify.

As it relates to the Eater article, Kirnon says, “It should be rewritten.” I agree with her. “It should all be rewritten, because we are more than just the footnotes of history.” 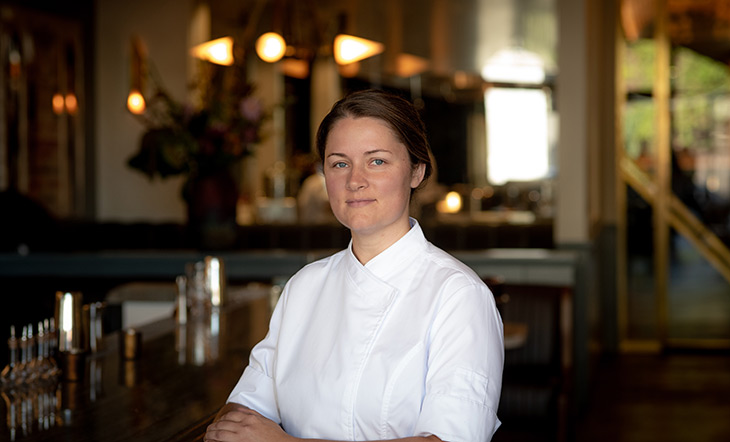