The culinary destiny of Jessica Largey

The James Beard Foundation is committed to supporting women in the food and beverage industry, from chefs and restaurateurs to entrepreneurs dreaming up new ways to make our food system more diverse, delicious, and sustainable. Our Women’s Leadership Programs (WLP) presented by Audi, provide training at multiple stages of an individual’s career, from pitching your brand to developing a perspective and policy on human resources. As part of the Foundation’s commitment to advancing women in the industry, we’re sharing stories from female James Beard Award winners, Women’s Leadership Program alumni, and thought leaders pushing for change. Below, Gabriella Gershenson recounts the meteoric rise of James Beard Award winner Jessica Largey, from her produce-packed childhood to her early worldwide acclaim, and her recent efforts to redefine a successful work culture.

“I just really love vegetables,” says Jessica Largey, the 32-year-old chef and co-owner of the sprawling new Los Angeles restaurant, Simone. “I could cook up a perfect little bunch of turnips and just be so happy for the rest of the day.”

Before opening her own restaurant, Largey, a California native, made her name as the chef de cuisine at Manresa in Los Gatos, where she crafted Michelin-starred tasting menus using exquisite produce grown exclusively for the restaurant, and won the 2015 James Beard Rising Star Chef Award for her work. “When people say to me, ‘That meal was so incredible. We ate mostly vegetables, I've never had that before,’ I'm like, yes!” says Largey. “Everyone needs to convert to lov[ing] vegetables."

Largey, who goes by Jes, comes by her relationship with produce honestly. She grew up in Fillmore, California, a town populated with avocado trees and citrus groves (it’s the home of Sunkist). Her mother was a tenacious gardener. To buy strawberries, the Largeys would drive to nearby Oxnard, the largest producer of the fruit in the state. “We would go get Harry's Berries from the roadside stand like it was the berries you got everywhere,” says Largey. “And those are some of the best strawberries in the world.”

The path to chefdom was paved with more than fruit. Largey’s parents were avid home cooks. Her grandmother was a self-taught gourmet who, according to Largey, could make anything. When Largey was eight years old, her grandmother announced that they’d be making lasagna from scratch for Christmas Eve. “It’s still one of the most incredible moments, realizing that you could make noodles, that it's not something you have to buy,” says Largey. “That opened up the world of you can make anything." But the pinnacle of Largey’s chef origin story was the time that she surprised her parents by making scrambled eggs when she was just 5. “I[‘ve] cooked every day ever since,” she says.

It’s no wonder that Largey decided to become a chef as a sophomore in high school. After graduation, she attended what was then Le Cordon Bleu (now ICE) in Pasadena, and found her calling. “When I went to culinary school, I became a different person,” says Largey. She went from being shy to outgoing, from feeling out of place to at home. “I found myself wholly and completely, and I was 18 years old, which feels insane.”

It was also clear that Largey was a savant. After witnessing her prowess in class, her instructors made Largey the sous chef of Bistro 561, one of the school’s fine dining restaurants. Unbeknownst to her, Largey was being groomed to work for a chef named Michael Cimarusti, a colleague of one of the instructors, at his new restaurant Providence in Los Angeles. After less than a month at Providence, she was promoted to line cook.

The events that followed can be best described as the adventures of a precocious chef who continually won over employers and colleagues with her talent and relentless work ethic. After a couple of years at Providence, Largey took a short break to travel in Europe. Upon her return to the U.S., she gave notice at Providence. On her last day, she met David Kinch, the executive chef of Manresa, whom she assisted for a guest chef dinner. Largey remembers every detail of the dish they made: a yellow bell pepper purée, mussels fried to order, and nasturtium sauce. Kinch’s unique naturalistic style was a revelation. He must have been impressed, too, because by the end of the night, Kinch had offered Largey a job.

Largey joined Kinch in Los Gatos, and rose swiftly through the ranks, becoming the chef de cuisine of Manresa at the age of 25. “That's where I found my creative voice,” says Largey, who spent 6 years there. “It was incredibly formative, because I was there for so long, that I got to learn anything and everything I had wanted to.” She was also battling burnout, working an average of 18 to 20 hours a day, and on days off, too. "I needed to take some time and space for myself." Largey won the James Beard Award just before she left Manresa, when she had already partnered with the late Bruno Bagbeni and the director Joe Russo on the project that would become Simone. “It was pretty amazing.”

Between jobs, Largey took three years off. “At that point, it had been 11 years of nonstop work, and I had never been an adult without that identity of being a chef. I really didn't know who I was outside of it, and I wanted to figure that out.”

After her walkabout, Largey was refreshed, with new ideas about the lifestyle she wanted to espouse at her own restaurant. “The biggest realization was the quality of work that you do when you're that tired and burnt out is not that great,” says Largey. “I think I can power through and work through anything, and I've proven that, but I don't need to ever prove that again.” Now, Largey is striving for balance. For instance, management at Simone works 50 to 60 hours a week, with two full days off. While this might seem like no big deal, for Largey, who at times worked 100-hour work weeks, it’s revolutionary.

And, of course, she is excited about what’s on the menu, and at the market. “The citrus season is really starting to boom,” says Largey. She is making oil from kaffir lime leaves to use in the aïoli for her steak tartare toast, punctuated with caramelized and pickled Thai shallots, savory garum, a blanket of thinly shaved honeydew radishes, and a sprinkling of powder made from dehydrated radish leaves, pulverized dried finger limes, roasted sesame, and salt. “When you look at it, it's like, ‘Oh, it's a piece of grilled bread with mayonnaise, tartare, and some radishes.’ Obviously, it's far more elevated than that, but it's also very approachable, in the sense that people know what tartare is. I'm so happy with it.”

Gabriella Gershenson is a freelance writer who lives in New York City. 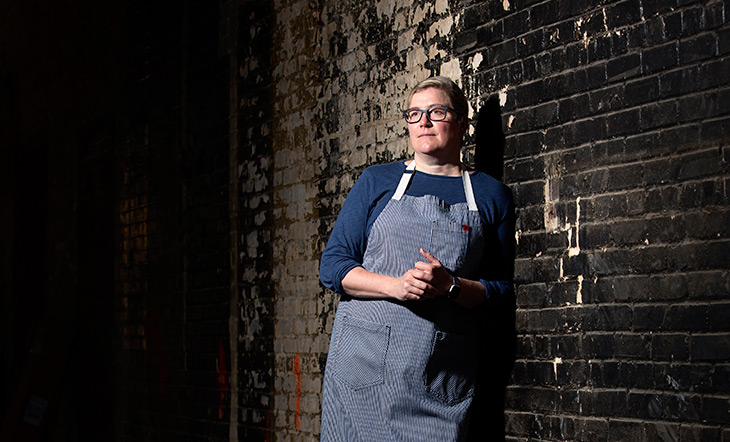 Mentorship Is at the Heart of This Award Winner's Success