When Brooks Headley took over the pastry department at New York City’s four-star Del Posto, it wasn’t long before his playful spirit began to seep into the acclaimed menu. Now the whip-smart, humble 2013 Outstanding Pastry Chef award winner can also add “author” to his résumé: his much-anticipated cookbook, Fancy Desserts, hit shelves this fall. Below, Brooks gets candid with senior editor Elena North-Kelly about chefs’ partying habits, his unexpected views on chocolate, and the essential ingredients for nailing any dessert.

Elena North-Kelly: You’ve described your culinary style as that of a “buzzed Italian grandma,” which may come as a surprise to some people, given your alter-ego as a drummer in punk bands. Can you tell us more about this side of you?

Brooks Headley: I am totally a grandma in the kitchen! I try to avoid scales, I like tearing things up with my hands, and I really consider myself a glorified home cook. I just happen to work at a really fancy restaurant run by Mark Ladner, Joe and Lidia Bastianich, and Mario Batali—they wanted someone who cooked like a nonna and they got one! I guess I got really lucky.

ENK: What are three indispensable ingredients you keep in your pantry for making great desserts?

BH: We had some slightly overproofed pizza dough hanging around the other day at Del Posto, so I stretched it out, threw it in the deep fryer, and turned it basically into state fair–style fried dough. When it was still piping hot, we blanketed it with powdered sugar, sprinkled some coarse sea salt on it, and then squeezed the juice of two lemons all over it. We tore it up standing next to the fryer and devoured it in five seconds. It was violently delicious. So...lemon, sugar, and salt?

ENK: What item on the Del Posto dessert menu are you most excited about right now?

BH: We spin a ricotta gelato, shape it by hand into a pear-like blob, coat it in brutti ma buoni cookie crumbs (the cookie recipe is in Fancy Desserts—shameless plug!), slice it in half, set it on a tart little pool of huckleberry marmellata, and toss on a few strands of salt- and sugar–cured lemon peel (see, there it is again). It’s really delicious and tastes simultaneously like you are in a gelateria in Italy and eating a Good Humor Toasted Almond ice cream bar.

ENK: Vegetables play a starring role in many of your creations, such as your eggplant and chocolate napoleon, celery sorbet, sunchoke crudo with yeast gelato, and fried roman artichokes with ricotta gelato and honey. Can you tell us more about turning to vegetables for dessert ingredients?

BH: I just love cooking with vegetables in a dessert context. It’s never to be showy or avant-garde. I just like to highlight the veg and make them delicious and fun. Beyond vegetables, I also overuse olive oil, bread crumbs, and vinegar. Those are some of the best things in the kitchen. I think it’s weird not to use them.

ENK: How do you cope during winter when fresh produce is scarce in NYC?

BH: It’s kind of a bummer, honestly. I’m always super jealous of Californians with their February strawberries and peas. But I also really like the fleeting nature of East Coast produce—for example, you get even more excited when yellow nectarines are only around for a quick spell. It makes it more special. In the winter I tend to use more nuts and dried fruit, because, well, that’s what’s around. Pineapple seems to get a free pass at Italian restaurants in both Italy and the U.S., but that’s about as tropical as I will get. Citrus? Blood oranges and tangerines always make me think about Christmas time. I absolutely adore persimmons, but unless you’re basically letting them rot on the branch and then snipping and gently carting them on a pillow to a restaurant, forget it; they’re pretty worthless when picked prematurely. At Manresa last year, I had a very simple persimmon dessert that blew me away. It was like a beautiful, scoopable jewel. Ah, California...

ENK: In the opening to your chocolate chapter, you state “‘Death by chocolate,’ or whatever the common saying is…that just sounds terrible.” Tell us more about why you’re not among the chocolate-enamored masses.

BH: I like chocolate just fine, but I’m not obsessed with it and I really prefer it in tiny portions. When folks say, “Gimme a big gooey molten chocolate blob and shave chocolate on it and where’s the chocolate fountain and the super-shiny, lithe garnish thingy,” I can’t help but wanna give them an apple. A really good apple, but definitely an apple. I also have very little patience for tempering chocolate, so maybe that plays into my feelings as well. Or maybe it’s just sour grapes because I’m not smart or patient enough to have fully mastered the science of chocolate. I do, however, love it mixed with olive oil, salt, and bread crumbs.

ENK: Even though our food culture has evolved to a place where chefs are revered as rock stars, you’ve written about the need to “check your ego at the employee entrance.” Can you tell us more about this?

BH: It’s all about hospitality, which Mark Ladner has taught me so much about. A few years ago, we did a crazy expensive collezione tasting menu where Ladner would personally present nine of the courses tableside and I would follow up with the final three. At this particular session, I returned to the kitchen from the final course fuming mad because the guests were on their cell phones as I was presenting to their table. “Who the hell do they think they are, man?” I was exasperated. Calmly, Ladner looked me straight in the eye and said, “Brooks, it’s not about us—it’s about them, always.” I will never forget that, and I have been in a state of Zen ever since. The whole “chef as a god” thing just cracks me up. Also, chefs tend to party way harder and way gnarlier than any musician I have ever met. When chefs and cooks show up to work hungover and they say, “Man, we partied like rock stars last night,” my thought bubble is always: “No, actually you just partied like chefs.”

BH: The look on my mother’s face when I, as an astute six-year-old, told her that the jarred spaghetti sauce I had at a friend’s house was infinitely better than her homemade, corn syrup–free, loaded-with-fresh-basil tomato sauce. Ah, that look. It still kills me. Sorry, Ma. 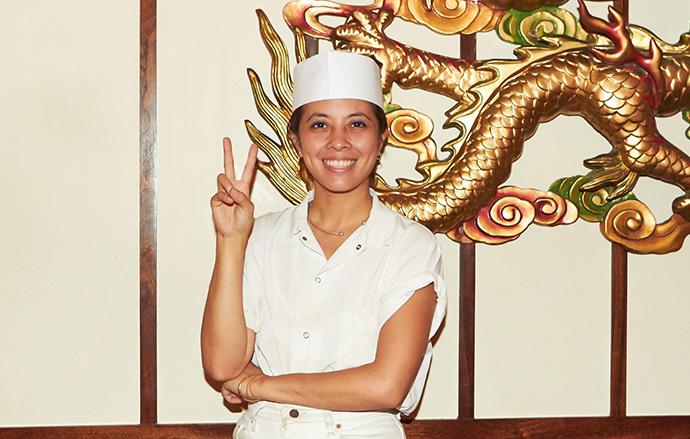