Cooking Up Community, One Plate at a Time

When we say the James Beard Foundation is about good food for good, it’s not limited to sustainable agriculture, the Farm Bill, or reducing food waste. Another important aspect of our mission is highlighting the myriad hands that are helping to shape American cuisine. Below, James Beard Foundation director of culinary community initiatives Colleen Vincent highlights the efforts of Natchez educator and activist Jarita Frazier King, recounting her recent Soul Food Fusion festival, and exploring her vision of creating unity for the Mississippi metropolis through food.

Earlier this summer, Jarita Frazier King organized the inaugural Soul Food Fusion Festival in Natchez, Mississippi, bringing together one hundred people from different walks of life and across color lines for a weekend dedicated to honoring a flawed past and dreaming of a better future.

Natchez may not spring to mind when you think about must-see culinary destinations—it’s a small city often overshadowed by its “sister” New Orleans. Also known as the “Little Easy,” Natchez was built on the same complicated history found across the southern United States. Founded more than 300 years ago, the city’s indigenous people were displaced to make room for French, British, and Spanish colonists. These European immigrants also brought enslaved Africans to work, among other things, the sprawling cotton fields.

After the Civil War and Reconstruction, Natchez proved to be a (short-lived) pioneer for equality, electing the first African-American speaker of the Mississippi House of Representatives, John Roy Lynch, and Hiram Revels, the United States Congress's first African-American senator. Unfortunately, the Mississippi Black codes, the rise of the Klan, and Jim Crow stifled this amazing progress. Generational slavery and decades of systemic discrimination led to the economic underdevelopment of Black communities and erasure of their contributions to Natchez’s history and prosperity.

Today, 35.9 percent of the city’s residents live below the poverty line—less than $21,330 a year for a family of three.

Frazier King, an African-American woman, is a product of this history—her family has been in Natchez for generations. She began her career in sports medicine, then became a nutrition educator at the historically Black university Alcorn State. Frazier King created the Natchez Heritage School of Cooking with the idea of strengthening and developing community around the culinary traditions of Mississippi and the African diaspora. The Soul Food Fusion Festival grew out of her work, as a means to encourage people to explore the complicated history and celebrate the city’s future.

Over the course of a few days leading up to the festival, Frazier King brought together culinary artists and food lovers (both Black and white) to talk about and savor dishes like turkey souse, blue crab, native yellow squash, and spicy duck and Andouille gumbo.

The night of the festival, dozens gathered in the center of downtown Natchez for an evening of food and music. The block-long table sat all manner of guests, dressed head-to-toe in white and enjoying black-eyed pea and collard green fritters, spicy Cajun pasta with French bread, jerk pork sliders, chicken and sausage Jambalaya, cheesecake made with fresh Louisiana strawberries, and more. The sounds of jazz and zydeco filled the air while young and old alike danced the calories off. Frazier King was in tears as the Leaders and Legends Foundation presented her with the “Community Visionary Award” for her continued commitment to bringing people together over food.

Frazier King isn’t the only woman forging her path in the Natchez food scene. Alizabeth “Beth” Blackmon recently became the first professionally trained female executive chef of the Carriage House Restaurant. Located at historic Stanton Hall estate, the restaurant features a mouthwatering menu of Southern favorites. Meanwhile, Hannah Grace-Hinkle, a teenager with a passion for baking and pastry, recently opened an edible cookie dough shop in downtown Natchez with more than a dozen flavors. All these culinary entrepreneurs and chefs are supported and championed by the people of Natchez. The Carriage House Restaurant’s dining room remains full, while Hinkle’s Rolling 'N’ the Dough storefront did brisk business on opening day.

Frazier King is far from done with her work: she’s currently creating a curriculum to teach young people, second-chance citizens, and recovering addicts culinary skills; has joined the OneVoice MS civic engagement nonprofit; has been selected to join the Mississippi Black Leadership Institute; and is in the process of taking her platform statewide. And of course, she’s planning the second-annual Soul Food Fusion Festival, buoyed by the city’s eagerness to celebrate again. Frazier King’s passion has touched the hearts of both residents and visitors, who, for one delicious evening, all experienced food and life across the table as Natchezians. 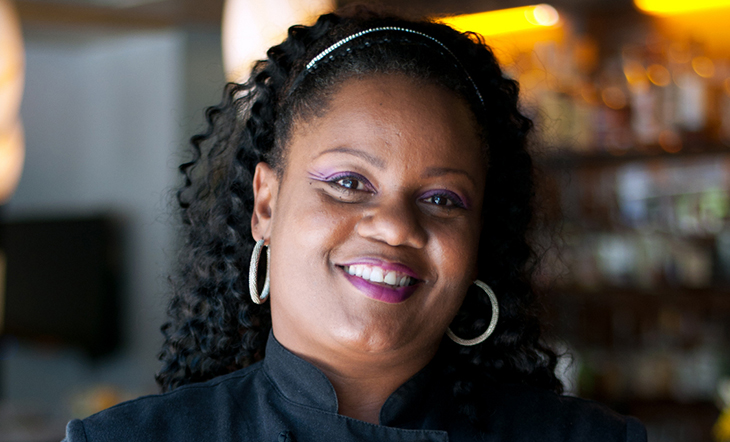 Fighting Stereotypes, One Dinner at a Time