Below, Lenore T. Adkins traces the path of WEL alumna Joanne Canady-Brown, who turned the failure of her first bakery into a vibrant business through innovation, dedication, and the support of a new network of peers.

Joanne Canady-Brown launched The Gingered Peach bakery almost six years ago, building it into a business amassing a cool $1.5 million in annual sales.

What’s even more remarkable is the fact that this success came after the owner, self-taught baker, and Women’s Entrepreneurial Leadership (WEL) program alumna shuttered her first bakery, Let Them Eat Cake Bake Shop, where she focused on making refined, “fancy” cakes and desserts. The bakery closed in 2013 after just 18 months.

Canady-Brown, 38, rebranded the New Jersey bakery as The Gingered Peach in December 2014, shifting its mission to creating “handcrafted baked goods with soul.” She moved the business from a 500 square foot space in Ewing to a 1,200 square foot spot in Lawrenceville.

She grew up baking with her maternal grandmother, Johnnie Nell Branda, and named the bakery in honor of a phrase her Georgia-born grandmother often said.

“We never had all we needed to bake, and in her really polite, Southern beautiful way, she’d say, ‘That’s OK, darling, we’re just going to ginger it up,’” Canady-Brown recalls.

They’d put their heads together and bake with whatever ingredients were available, a liberating approach that removed the pressure to stick with an ingredient list or use exact measurements.

That was the feeling Canady-Brown was going for when she revamped her business—her late grandmother was known for baking comfort food like biscuits and pineapple upside-down cake.

But the pastry chef’s been having what she calls “a beautiful problem” ever since she opened: she and her 23-member team are so busy they’ve had to turn customers away. Over the holidays, she was forced to cut off orders for Christmas cakes—as she’s had to do every year—because the bakery simply can’t fill the demand.

At the time she applied to join the WEL program, Canady-Brown was used to going it alone.

She didn’t have chef friends or a network of people in the food business to lean on for advice. Instead of attending culinary school, she learned how to bake from her grandmother, then built on those skills by reading books and trying out recipes. Banks balked at giving her a loan to open her bakeries, so she financed both ventures herself.

Her abilities had taken The Gingered Peach as far as she could go. She felt vulnerable putting herself out there, but desperately needed peers who’d been through the same experiences, and a sounding board of investors and experts to guide her through the forest and help resolve her supply issues.

That’s exactly what she found in the WEL program.

“I just ran with it,” Canady-Brown says. “It was big for me to have a network of [women] who made you feel comfortable and supported. No idea was stupid.”

She felt so comfortable with the group that she pitched them her idea of opening a luncheonette inside a bigger building with a baking kitchen to help handle orders at The Gingered Peach.

The project, called Marmalade, would focus on savory breakfast and lunch fare, pulling inspiration from the South, Canady-Brown’s travels, life experiences, and the cuisines of Korean and Puerto Rican family members. In order to attract new customers, she reasoned, the food would have to be a complete departure from what she already does.

Since then, Canady-Brown has gone from the talking phase to the doing phase, as Marmalade is expected to become a reality in spring 2021.

Besides using personal collateral and cash, Canady-Brown says she was approved for a $140,000 loan towards the project from Square. And she’s shopping for an investor.

“I’m in the dating stage now, making sure they’re the right fit for me. ‘OK, cool, you like me do I like you? I want to be picky because I’m stuck with you for all my life,’” she says.

There will be dessert, of course, with a focus on pie as a homage to the quintessential American diner. Other items will cross over between both eateries, like the cinnamon buns (the most popular item at the Gingered Peach), sticky buns, and croissants.

Marmalade will be situated down the street from The Gingered Peach, in an old garage currently without water, sewer, or electricity. Canady-Brown plans to transform this eyesore into a “dope,” usable building.

The location eliminates quality control issues, reinforces the idea that the businesses are sisters, but not twins, and allows Canady-Brown to remain in a community and with landlords who have both supported her bakery.

“This community made me, and I made myself through their recipes,” she says.

That’s what you call “gingering” it up.

Lenore T. Adkins is a writer based in Washington, D.C. Her pieces have appeared in The Washington Post, Eater, DCist, The Afro-American Newspapers, and more. Follow her on Instagram at @lladkins. 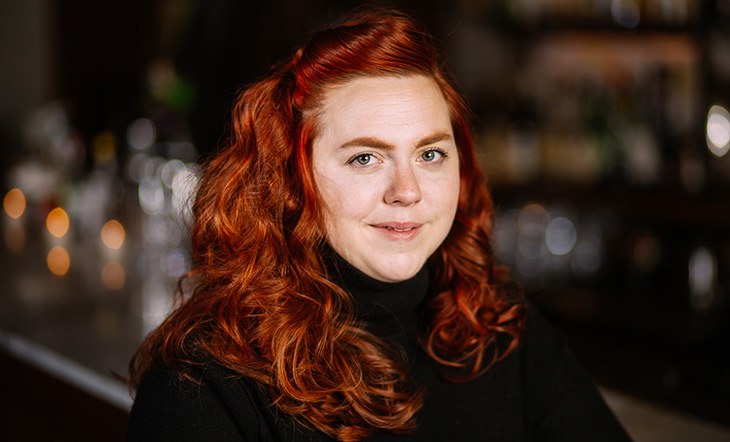 What Does it Mean to Be Safe in a Restaurant?