Get In the St. Patrick's Day Spirit with This Recipe 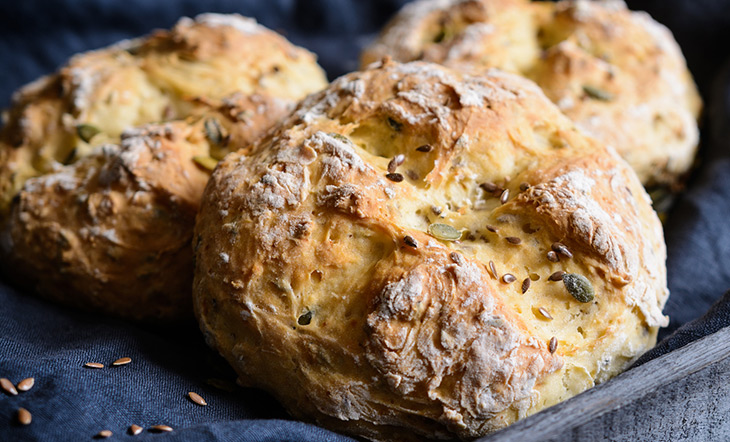 In his iconic tome, Beard on Food, which was first published in 1974, our namesake wrote prolific prose on a vast landscape of culinary topics, from a lesson in chicken anatomy to a sandwich manifesto to an homage to the oft-underappreciated Irish soda bread, which we share with you today. Humorous, erudite, and timeless, this collection of essays remains an indispensable resource for the home cook. Stay tuned for more!

If anything could be considered the national food of Ireland, Irish stew and corned beef and cabbage notwithstanding, it would have to be soda bread. You find it on every table in that enchanting country—in homes, hotels and restaurants. Wherever you go there is soda bread—freshly baked, packaged, even frozen, made with whole-wheat flour or white flour or oatmeal, sometimes with raisins and sometimes without.

Traditionally, soda bread is baked over a peat fire in a three-legged iron pot that can be raised or lowered over the fire in the old fashioned way. Glowing peat sods put on top of the pot give an even heat for baking. This all-purpose pot, used for just about everything from stews to cakes, is the origin of the phrase “to take pot-luck,” and lucky indeed would anyone be to drop in at an Irish cottage or farmhouse and be given homemade soda bread for tea. For soda bread is very different from any other bread you find anywhere in the world. It’s round, with a cross cut in the top and it has a velvety texture and unusual smoothness quite unlike yeast bread and the most distinctive and delicious taste. Sliced paper-thin and buttered, it is one of the best tea or breakfast breads I know, and it makes the most wonderful toast for breakfast or for sandwiches.

After spending a few weeks in Ireland, I have been playing around with soda bread because I discovered that although the recipe you get in Ireland works well if you are using Irish ingredients, when you are working with our flours you have to change the recipe a bit. After about three or four months of experimenting I considered that I have evolved a very satisfactory process, so I gave a little dinner party for three people who are actively engaged in the food business and tried out my latest soda bread achievement on them. I always find this a good test. I try a recipe for myself, and if it turns out well, I then try it on other people and see their reaction—and I don’t always tell them what I am up to; I just wait and see what they say. If they say nothing, of course I feel quite deflated and strive to do something better. This time I gave my guests both a white and a whole-wheat soda bread, and they were delighted with them so I think I can safely pass the recipes on to you.

When you start to make your Irish Soda Bread, set the oven at 375 degrees. This bread doesn’t have to rise first like yeast bread. For the whole-wheat loaf, take 3 cups of whole-wheat flour and 1 cup of all-purpose white flour and mix it with 1 tablespoon of sugar, 1 teaspoon of salt, 1 very level teaspoon baking soda, and 3/4 teaspoon of baking powder. The original recipe does include baking powder but I made this change because I find that in America you get much better results by adding it. Mix all this very well so that the soda and baking powder are thoroughly distributed, and then add enough buttermilk or sour milk (and since sour milk is not easy to come by these days you are better off with commercial buttermilk) to make a soft dough. Most recipes call for 1 cup of buttermilk, but I find the amount varies a good deal and you need closer to 2 cups. You will just have to sense when you have a good soft dough, similar to biscuit dough.

Knead on a lightly floured board for 2 to 3 minutes until it is quite smooth and velvety-looking, and then form it into a round cake. Place it on a well-buttered 8-inch cake pan or a well-buttered cookie sheet and cut a cross on the top of the load with a very sharp-floured knife. Pop it into the 375-degree oven and bake for 35 to 40 minutes until it has turned a nice brown and sounds hollow when you tap it with your knuckles. The cross on the top will have spread into sort of a deep gash, which is characteristic of Irish soda bread. Let the loaf completely cool before cutting it into paper-thin slices—soda bread must never be cut thickly.

For the white load, use 4 cups white flour, preferably unbleached and the same amounts of salt, sugar, and baking powder as before, but decrease the baking soda to 3/4 teaspoon. Mix like the whole-wheat load adding just enough buttermilk tot make a soft that is soft, but not so soft that it spreads; it should hold its shape. Knead for several minutes, form into a round cake, cut a cross on the top, and bake as before.

There are all kinds of ways to vary this basic soda bread recipe—you might add to the white load 1 tablespoon sugar and 1/2 golden sultana raisins or dark raisins or currants which you flour lightly and stir into the batter at the last minute. Or you can use chopped walnuts and raisins. There are very pleasant tea breads and the plain raisin bread makes delicious toast, nice and moist. You can experiment and play around with the bread, using maybe half white flour and half whole-wheat, or add other flours such as rye, soy, barley, in the ratio of three parts to one part white.

As far as I’m concerned, I like mine plain and simple, served well buttered with some good preserves and a nice strong cup of tea.