How Collaboration Helped One Chef Support Her Community

Below, Peyton Garcia spoke with Kim Alter of Nightbird on how she is helping the San Francisco restaurant community through a new organization, the Bay Area Hospitality Coalition.

When rumors about a citywide shutdown began swirling around the San Francisco restaurant scene in early March 2020, Kim Alter wasted no time jumping into action. The James Beard Award nominee and chef/owner of Nightbird recalls that on the very day the government-mandated closures were announced, she and about 25 other chefs and restaurateurs from the area began planning strategies.

“Everyone came down to discuss, ‘What do we do if this happens? How can we band together? What are safety precautions we should put in place?’” says Alter.

The congregation quickly formed an ad hoc steering committee and called themselves the Bay Area Hospitality Coalition. In addition to Alter, other notable members included Mourad Lahlou, Brandon Jew, Elizabeth Pruitt, and Alter’s business partner at Nightbird, Rob Boyd. The group defined their purpose as sharing creative solutions and pertinent information to aid restaurant operators and employees amid COVID-19 disruptions. On their website and social media pages, they pumped out important industry notices such as updates on legislation and COVID restrictions; announcements about grants and other financial assistance; and opportunities to team up with relief organizations.

In the beginning, Alter was participating in as many as four Zoom calls a day, up to five days a week, discussing fundraisers, emergency food services, and nonprofit collaborations. Despite the empty dining room at Nightbird, Alter’s kitchen was still pumping out hot dishes thanks to partnerships with Frontline Foods, where she provided meals for emergency room personnel, and local relief organization SF New Deal, which offered food services to churches and the homeless community.

“We didn’t even take a day off. The next day [after the shutdowns], we were cleaning and cooking for the hospitals.”

From March through July, Alter estimates she and her team put out more than 2,000 meals per week through partnerships with various coalitions and nonprofits including Dine11SF, the Independent Restaurant Coalition, FEMA, and World Central Kitchen.

But more than just providing immediate hunger relief to her community, Alter’s mind went instinctively to the bigger picture—the farmers.

“Obviously they were going to be [just] as affected because they’d just lost all of their restaurant sales,” she explains. “I started trying to figure out how we could get rid of the product they already had growing and how to disperse it amongst the restaurants.”

She got involved with CUESA (Center for Urban Education about Sustainable Agriculture), a local nonprofit dedicated to advocating and fostering community farmers markets. Alter was able to connect with about 150 local farmers and began brokering mutually beneficial transactions with area chefs—like selling produce at half price—thus taking product off the farmers’ hands while providing affordable ingredients to restaurants struggling to stay afloat.

Though she worries about her own restaurant, Alter knows that if it’s going to survive, it needs a community to survive for. And that means making sacrifices.

“I’m still paying insurance on my servers who haven’t stepped foot in here since March,” Alter says. “I went from making $150 a head to $10 a head, but it’s what we have to do.”

In fact, Alter gave all of her staff—front of house and back of house—the opportunity to remain employed at Nightbird. She continued to pay for their health insurance and even started a GoFundMe campaign where all proceeds went straight to her hourly workers. For anyone who chose to leave, Alter offered severance pay.

For nearly a year now, Alter and her counterparts within the San Francisco culinary industry have banded together in the name of survival for their once-thriving dining scene. While they have had many successes to celebrate, Alter says their work is far from over.

“I don’t think things are going to be back to normal until 2022,” she continues. “We’re all walking into this year knowing it’s going to be a struggle, and we have to help each other to make sure that we all get out of this.”

Alter and several of her partners from the Bay Area Hospitality Coalition are hoping to host a fundraiser in order to continue to support restaurants that are struggling to reopen successfully or that didn’t have the benefit of receiving Payment Protection Program (PPP). Alter still meets with the Independent Restaurant Coalition a couple times a week and is continuing to work with SF New Deal.

“There’s no roadmap [for this pandemic],” she says. “But it showed that a group like us could get together and try to make something happen.”

Peyton Garcia is a writer and editor based in Colorado. You can find more of her work at peytongarciamedia.com. 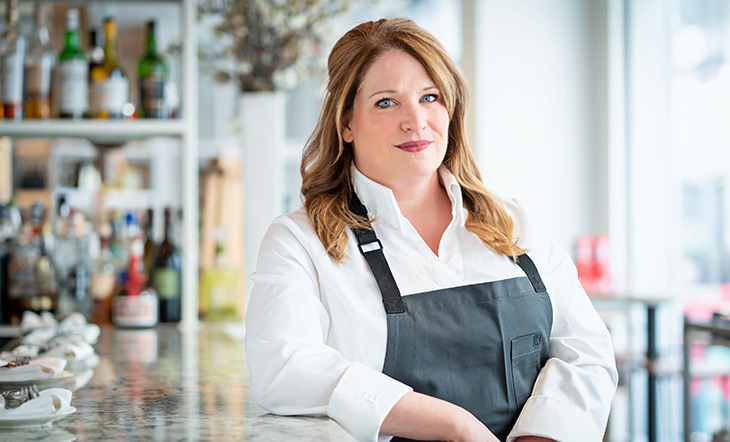 How This Chef Found Success on Her Own Terms