How This First Time Restaurateur is Feeding Seattle

Below, Laurie Woolever spoke to Melissa Miranda of Musang on how her relief efforts led to the Seattle Community Kitchen Collective.

“We opened our doors in January; it was a first-time restaurant owner’s dream. The reception was incredible. I felt so much pride from within our community,” said chef and owner Melissa Miranda of Musang, her first restaurant, which opened earlier this year in Seattle. Although the pandemic ended up shuttering her business just two months later, Miranda tapped into that same sense of community to form the Seattle Community Kitchen Collective to feed her neighbors in need, no questions asked.

Miranda grew up in Seattle’s historically Filipino neighborhood of Beacon Hill, watching and helping her father cook at home. After earning a degree in sociology from the University of Washington, she decided to pursue her burgeoning interest in cooking by moving to Italy and enrolling in a food and hospitality program at the Florence University of Arts. She then spent five years cooking in Italy, and another two in New York, before returning home.

While working as a sous chef at Bar del Corso, Miranda spent three years developing the concept for Musang, hosting frequent pop-ups with an evolving menu of Filipino dishes. Over time she attracted a fan base eager to enjoy her hospitality in a permanent space. From the outset, Miranda’s vision was a business by and for the community.

While Musang was an instant hit, Miranda saw something deeply worrying on the horizon.

“I have friends in Italy and the Philippines, and I was watching what was happening [to] them with COVID-19.” Although Musang maintained steady business, Miranda noticed that neighboring restaurants “started feeling the drop in business at the end of February.”

As COVID-19 became a substantial threat in Seattle, Miranda made a painful decision for her nascent business, closing her dining room in early March, a few days before the governor made it official.

“My feeling was, if we’re promoting community, and the community is filling up our space, we’re not keeping them safe. We tried pivoting to take-out only, but we still had a lot of traffic. A lot of our staff live with their parents. The risk to everyone’s health was too great. It was our social responsibility—we decided to close.”

Soon most institutions and businesses were forced to follow suit, shutting down in order to combat the spread of the virus. Living and working in the community, Miranda knew that a lot of people found themselves unexpectedly out of work and school, suddenly scrambling to get by.

“I started thinking about the children who’d been getting two meals a day from the school,” said Miranda. “In this neighborhood, there are a lot of food-insecure folks.”

Using what they had on hand, and putting out a call for donations of non-perishables from fellow restaurateurs, Miranda and her sous chef Jonnah Ayala began to prepare free meals for the community. They eventually raised $80,000 in donations and began posting their efforts on social media for transparency nd to spread the word.

“Good communication is very necessary because we’re such a community-driven place, and we want to make sure that we’re acting with integrity,” she said.

For several weeks, Miranda and Ayala prepared up to 200 meals per day, six days a week, for anyone in need. Hoping to stave off the inevitable burnout, Miranda consulted with a number of chef colleagues. In order to make the initiative more sustainable, Miranda and her colleagues formed the Seattle Community Kitchen Collective. In addition to Miranda, the board is comprised of Tarik Abdullah of the charity Feed the People, Chera Amlag of Hood Famous Bakeshop, Kristi Brown of catering company That Brown Girl Cooks, Guitar Srisuthiamorn of Sugar Hill, and Cameron Hanin, owner of the pop-up Guerilla Pizza Kitchen. With responsibility shared across the collective, each business can contribute what they are able to while also remaining financially solvent in an extremely challenging climate.

Musang has re-opened and is now offering take-out, delivery, and patio dining, and the community kitchen is pressing on right alongside it, operating two days a week. The collective looks to World Central Kitchen for inspiration and hopes to keep the initiative running even after the COVID-19 crisis has abated. “The question is, what happens when the money runs out? How do we keep feeding people? We’re trying to see if we can find a 501(c)(3) nonprofit sponsorship, but for the time being, we’re just kind of making it work.”

To those hospitality professionals looking to follow the collective’s lead, Miranda has a few words of advice: “I think it’s worth understanding that this six-days-a-week model isn’t for everyone. I have a staff that is committed—most of them are young Filipino cooks who are proud to be serving the food that we’re doing and believe in the work. But you can do something, even if it’s donating 50 meals to a church, one time or once a week. Food insecurity has been present and will be present, and it’s something, unfortunately, that’s getting worse. I’d like to think that we in the hospitality business can be leaders in making change.” 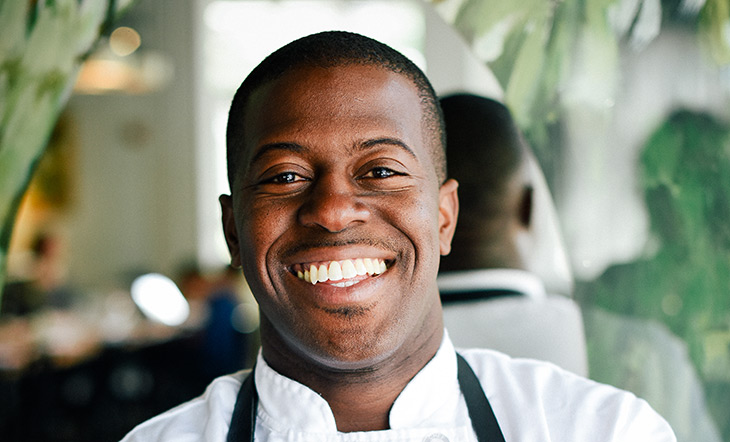 How to Eat Like an Award Winner in Seattle