Where age is nothing but a number

The James Beard Foundation is committed to supporting women in the food and beverage industry, from chefs and restaurateurs to entrepreneurs dreaming up new ways to make our food system more diverse, delicious, and sustainable. Our Women’s Leadership Programs (WLP) presented by Audi, provide training at multiple stages of an individual’s career, from pitching your brand to developing a perspective and policy on human resources. As part of the Foundation’s commitment to advancing women in the industry, we’re sharing stories from female James Beard Award winners, Women’s Leadership Program alumni, and thought leaders pushing for change. Below, Rachel Tepper Paley explores the path of James Beard Award winner Daniela Soto-Innes, from talking her way into fine dining kitchens as an underage aspiring cook to assuming the mantle of executive chef at Cosme at the age of 23.

When people lie about their age, it’s usually a play at making themselves seem younger. For years, Daniela Soto-Innes, the wunderkind chef at the helm of modern Mexican powerhouse Cosme and its all-day-cafe sister Atla in New York City, went in the opposite direction.

The way she tells it, Soto-Innes has an inborn desire to cook. Maybe it has to do with her upbringing: during her childhood in Mexico City, Soto-Innes’s grandmother managed a bakery. Television cooking shows always blared in the background at home. Her mother had dreams of becoming a chef, but went into law instead; she made do with cooking classes, letting Soto-Innes tag along from the tender age of five. Even the streets of Mexico City, redolent with spices and the smells of charred meats, seemed to point her toward the kitchen. Loving food came as naturally as breathing, Soto-Innes said. It continued when her family moved to Houston when she was 12.

As a young teen, Soto-Innes landed her first culinary job in a hotel restaurant in Houston, chopping strawberries and washing lettuce. She showed up every day until they hired her (and lied about her age, of course). After a few years of odd jobs in local kitchens, at age 17 Soto-Innes graduated early from high school. By 19, she was a graduate of the Le Cordon Bleu. At 20, she began working her way up the totem pole in some of Houston’s best kitchens, including James Beard Award–winning chef Chris Shepherd’s Underbelly. But Soto-Innes found herself wanting more.

“I realized that I needed to move forward,” she said. “I figured I needed a job to kick my ass.” Inspired by a desire to return to her Mexican roots, Soto-Innes wrote to Enrique Olvera, the godfather of modern Mexican cuisine, asking to spend time in his groundbreaking Mexico City restaurant Pujol. Before she knew it, she was happily toiling in the depths of Olvera’s kitchen alongside chefs several years her senior. When it was over, Soto-Innes returned to the States—as a U.S. citizen, she could only stay six months at a time in Mexico—but ached to return.

“Then Enrique wrote to me that he wanted me to come back, and the next day I was on a plane to Mexico,” she said. Six months later, he asked her to help him launch Cosme. “I was 23 years old, starting a restaurant from zero. I Googled everything,” Soto-Innes said.

Now fully in her groove, Soto-Innes’s daily life is less about figuring out how to run a restaurant and more about making it a fun, supportive environment for her staff. A happy kitchen means a better kitchen, she believes. Being a younger person, she’s less bogged down by expectations of what a kitchen is supposed to be like, which in years past, might have been an abusive environment where the chef screams and the staff keeps their heads down.

“You don’t have to suffer the old-school way,” Soto-Innes said. “I told myself I was going to get the most out of people, and do it the right way.”

For starters, that means having a “generous heart.” Translation: being invested in lives of her workers, both inside the kitchen and out.

Soto-Innes also encourages workers to rotate within the kitchen, learning new skills and techniques. If a sous chef slices a piece of fish incorrectly or doesn’t plate a dish properly, she tries to make it a teachable moment. No voices are raised. “I wish I’d had someone sit down with me and gone through the steps to be a better sous chef,” she said. “When you create talent, you are going to succeed because you have more talent in your kitchen.” Mentoring, she continued, is like getting into an exercise routine. “If you do it one day, you’ll do it the next.”

At the end of the day, Soto-Innes is certain that her staff respects her more for treating them with respect. People will work harder for someone they love than someone they fear, she believes. She plans to take this ethos on the road: Cosme is in the process of opening an L.A. outpost, with Soto-Innes leading the kitchen. She’ll be bicoastal for the foreseeable future.

“It doesn’t scare me to move—it actually makes me excited,” Soto-Innes said. “Right now, I’m working with all these new cooks who are incredible. They’re so grateful to be here. And even more rewarding than having two successful restaurants is being a mentor to those people.” 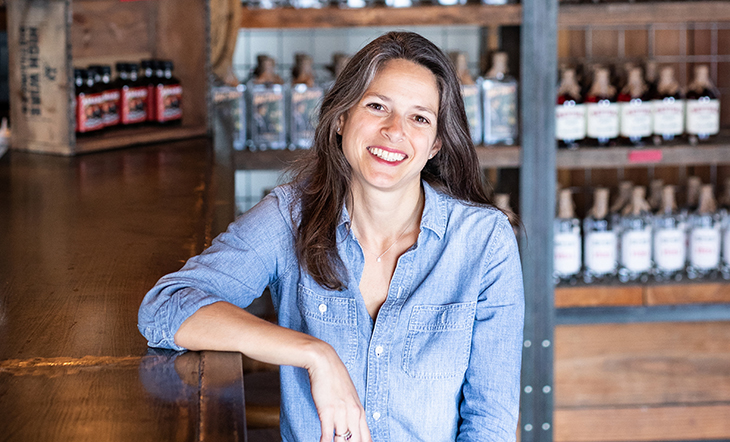