This morning, six women chefs walked into the Beard House kitchen and met face-to-face for the first time. Hailing from across the U.S. to as far-flung as Berlin and Hong Kong, this motley crew is united by two common causes: the celebration of International Women’s Day, and the belief in the promise of vegan food, both of which serve as the inspiration for tonight's dinner at the Beard House.

Organized by Women Chefs and Restaurateurs (WCR), the prominent industry resource center and network for female chefs, tonight’s event is led by incoming WCR president Nina Curtis, along with Peggy Chan, Sophia Hoffmann, Makini Howell, Cara Mangini, and Carrie Summer, all of whom specialize in plant-based cuisine. At first glance, the link between vegan food and International Women’s Day may not seem obvious, but Curtis feels it takes merely a step back to see the broader connections: “Plant-based/vegan food is vibrant, colorful, and liberating. It is progressive and delicious, and I believe it pairs perfectly with International Women’s Day as we continue to move forward to provide diversity, inclusion, and advancement for women globally.”

Curtis points to the historical longevity of plant-based dishes, which pop up in cuisines across the world, and are reflected in the globetrotting menu of tonight’s dinner, listed in full below. As she says: “plant-based food is foundational”—a form of connective tissue stretching across a worldwide community, linking a legacy of female home cooks, authors, and chefs to the women today who are asserting their place in professional kitchens and questioning the rules and expectations society has around what’s on the menu, and who gets to cook it.

While the Beard House has celebrated International Women’s Day in previous years, the recognition of the holiday this year seems particularly resonant. 2018 marks WCR’s twenty-fifth anniversary, and the organization’s mission has only grown more relevant, expanding beyond internal networking and resources for women to initiatives like this month’s RestaurantHER project, a collaboration between WCR, JBF, and delivery giant GrubHub to promote women-led restaurants and food businesses.

For JBF’s director of House programming, Izabela Wojcik, having WCR curate the International Women’s Day dinner seemed only natural. “WCR took inspiration from the day’s theme to invite a powerful group of women who are fierce advocates for vegan cooking and plant-based eating. It's a fitting theme for 2018 as we look ahead at where key food, policy, and social issues meet deliciously on our plate,” she remarked.

So it should come as no surprise that these women, who are used to defying expectations on their menus, would be more than ready to take on the stereotypes facing them in the kitchen. As Curtis says, “the time is ripe—it is a dynamic and exciting time to be a woman in the restaurant industry. The future is women, and we have been working diligently for this moment for decades.”

Tonight, these six women will come together on the line in the Beard House kitchen, working in tandem to advance WCR’s mission: to magnify the collective voice of women in culinary industry, and to elevate the position and recognition of women in this diverse world of hospitality.

Learn more about RestaurantHer, our collaboration with WCR and Grubhub in support of JBF Women’s Leadership Programs. 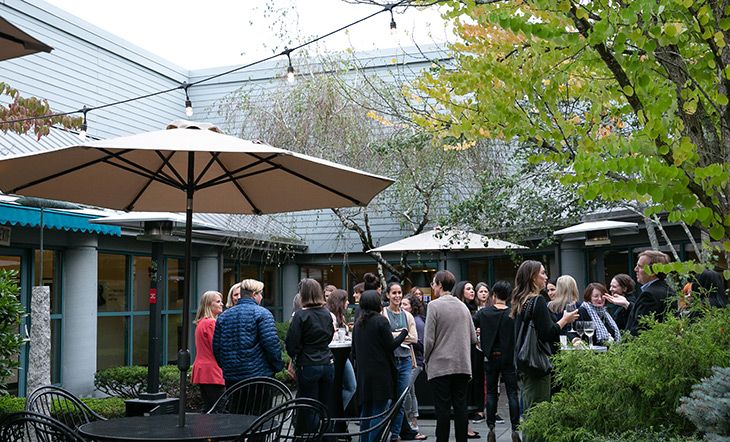 How We Continue to Honor Women in the Industry