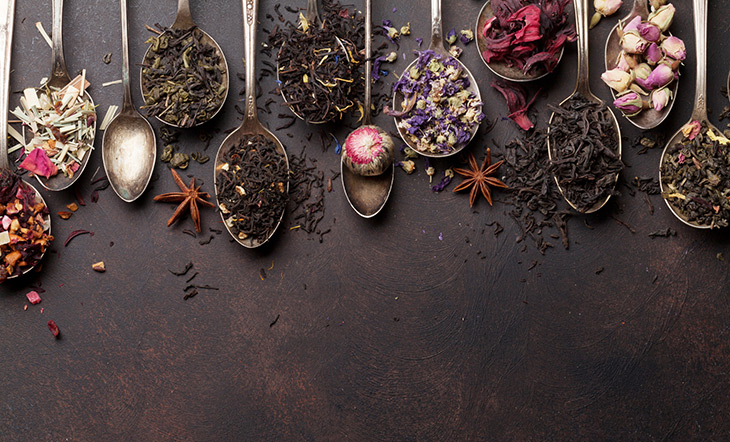 In his iconic tome, Beard on Food, which was first published in 1974, our namesake wrote prolific prose on a vast landscape of culinary topics, from a lesson in chicken anatomy to a sandwich manifesto to a passionate defense of the pleasures of tea, which we share with you today. Humorous, erudite, and timeless, this collection of essays remains an indispensable resource for the home cook. Stay tuned for more!

One of these days I’m going to start a militant organization of tea lovers, dedicated to improving the standards of the tea served in hotel dining rooms and restaurants. I’m a tea drinker, and I’ve found that getting a good cup of tea in any public place in this country is virtually an impossibility. It’s generally assumed that everyone wants to drink coffee, and the tea drinker is given very short shrift indeed.

I will recall ordering tea one morning in a very famous hotel and being given something that was definitely tap water with a tea bag on the side. When I complained, the waitress retorted, “I knew I was going to have trouble with you. Now I’ll have to go downstairs and get some boiling water.”

That’s the general attitude, yet it is so simple to make a good cup of tea. All you need is boiling water, a pot, preferably of earthenware or porcelain, and tea or tea bags. As the water comes to a boil, rinse the pot to get it well heated, add the tea or tea bags, pour on the freshly boiling water, and let it stand and steep for 3-4 minutes. Is this too much trouble? Certainly when you consider the price charged for a pot of tea it shouldn’t be. Why, when coffee brewing has been brought to a fine art, should we be forced to accept mediocrity in tea?

At home I prefer to use loose tea, but away from home I’ve come to accept tea bags. The trouble is that no restaurant gives you more than one, and the amount of tea in a tea bag is totally inadequate for even a small pot—except in Canada, where the tea bags are larger and hold more than ours. You can always ask for two tea bags, but you’ll still get the same old routine—a pot of barely warm water with the tea bags on the side.

I’m slightly cheered to notice that there is a growing increase in the types of tea sold throughout the country, with all the great names in tea such as Twinings, Ridgways, and Fortnum & Mason represented on the shelves of grocery stores and supermarkets.

I always have at least four different types of tea on hand. For breakfast I like Darjeeling, an Indian tea that is also a component of the excellent blend called English Breakfast Tea. For afternoon drinking, I keep a selection, for to me there is nothing more comforting than to come home, feeling a bit tired and weary, and make myself a pot of steaming hot tea.

First, there’s Formosa Oolong, from an island that produces some of the world’s finest teas. It has the wonderful bouquet and slightly exotic flavor characteristic of the true Oolong leaf. Then I have Lapsang Souchong, a smoky Chinese tea cured over peat fires, delicately colored and extremely bracing and pleasurable to the palate and pungent to the nose. I also keep Keemun, another China tea of rather distinctive flavor and bouquet, and that old favorite, Earl Grey, which has an almost orangey aroma, very relaxing and cozy, the kind of tea you like to sip with a toasted muffin or scone or a slice of cake, in the English manner.

I love afternoon tea. I remember, years ago, driving into Westchester to a charming old farmhouse where they served tea and the most delicious cinnamon toast I’ve ever tasted. They took good bread and toasted it on one side. Then the other side was well spread with butter and sprinkled rather heavily with brown sugar and cinnamon. This was run under the broiler and watched carefully until the sugar melted and mingled with the butter and cinnamon. By the time the almost candied toast had been removed from the oven and cut into strips it was crispy on top and luxuriously rich when you bit into it. I often make this cinnamon toast—it’s one of the best contrasts to a good cup of tea you can imagine.

To me, tea should always be drunk from thin, nicely shaped cups, and I prefer mine plain. Although one is often served cream with tea in the United States, milk is preferable. It blends better and has a pleasanter flavor. For sweetening, I think lump sugar is more delicate and fitting than granulated.

On a really cold day—or even on a hot one—you might try what used to be called Russian tea, a boiling hot cup of fairly strong tea to which you add a little rum, a slice of lemon, and, if you like, sugar. It’s refreshing, relaxing, and delicious.

Now if all tea lovers got together, surely we could prevail on restaurants and hotels to give us a good, hearty, fairly strong cup of tea to satisfy our thirst with its steaming briskness. And when it comes to iced tea, we should insist on having freshly made tea poured over an ample amount of crushed ice and served at once, rather than the usual horrid brew kept all day in a large container until it is stale, tasteless, and full of tannic acid. Tea is such a precious thing that it is well worth fighting for.

Have your tea and eat it, too, with this recipe for a Jasmine milk cake.

Here's the Way to Make the Perfect Vinaigrette