In her latest dispatch, our senior director of food policy advocacy Katherine Miller responds to the recent natural disasters of hurricanes Harvey and Irma by highlighting the efforts of the culinary community to provide relief early and often for all the individuals and businesses affected.

As I began to work in the culinary world, I noticed something that many already knew: chefs are the most generous people, and business owners, in their communities. Repeatedly asked to donate their time and restaurants to important causes, chefs hardly ever say no.

But one thing I hadn’t fully appreciated is how much they are willing to give without ever being asked. From what I’ve seen over the last few weeks, as hurricanes Harvey and Irma pounded Texas, Florida, and several Caribbean Islands, chefs are truly everyday heroes who are keeping victims fed and comforted during times of crisis.

JBF Award winner José Andrés and his World Central Kitchen organization, with support from more than 125 chefs, including Boot Camp alum Victor Albisu, were on the ground in Houston serving more than 20,000 meals immediately following Harvey. And when chef Andrés signaled that he had enough chefs lined up to work, others offered up donations of non-perishable food, equipment, and money raised through their restaurants. Boot Camp alum Tiffany Derry got herself to Beaumont, Texas, where, working out of Ebenezer Baptist Church, she’s helped feed over 1,000 people displaced by the storm.

But chefs will be asked to do more than feeding the displaced. In the coming weeks, the chef community will be called on to support its own. In Texas, early economic analysis shows that in Houston most restaurants lost 100-percent of their revenue for at least five days. Many will be slow to reopen.

It may get even worse. We’re just starting to uncover the extent of the devastation across Florida and the Caribbean. With no power in some areas of Florida, restaurants in those areas are likely to lose millions of dollars in food products. Across the Caribbean, restaurants weren’t just flooded or shuttered—they were decimated.

It will take months, if not years, for them to reopen. This means that hundreds of line cooks, waiters, and chefs may be unemployed or forced to leave the industry they love. They will need the emotional support of their fellow chefs and the restaurant community, but they will also need jobs!

When I see the pictures from St. John, Tortola, and Barbuda, I am reminded of Hurricane Katrina and the earthquake in Haiti, and how some of the earliest and longest sustained relief efforts to rebuild also came from the culinary community. JBF Award winner Donald Link reopened HerbSaint just two weeks after Katrina: "Inside these walls, everything felt normal. It's kind of like the first restaurants that opened were this beacon of hope that everything's gonna be all right. It can be done.”

It took Leah Chase, the 2015 JBF Lifetime Achievement Award winner, just over two years to reopen Dooky Chase’s in New Orleans. For her, it was worth the fight. "I was fortunate, really. So now what I try to do is do what I can to help get the rest of us up and going. You got to battle, you got to go all the way," she says.

Chef Andrés created World Central Kitchen in response to the disaster in Haiti and, just like in Houston, he and his army of chef-volunteers fed thousands of people.

The chefs who stayed in these communities and rebuilt didn’t do it all on their own. Not only did they receive support from their fellow chefs and restaurateurs, but many also received government assistance through donations sent to local organizations, national efforts led by groups such as the American Red Cross, and federal aid distributed by FEMA.

Many restaurant workers may also find themselves applying for the Supplemental Nutrition Assistance Program to help purchase food for their families. (Programs have been opened in response to both Irma and Harvey.) This support program, commonly thought of as food stamps, is meant to help families in the most need. In the coming months, you’ll see chefs bringing information about the importance of SNAP in times like these to the attention of media and elected officials across the country.

The power of chefs to bring ice, generators, food, attention, and yes, hope, to the people impacted by these horrible natural disasters is almost immeasurable. I know that the chef community will respond to support its brothers and sisters in Houston and Beaumont, and across Florida and the Caribbean.

For more information about how you can join them and support the communities impacted by Harvey and Irma: 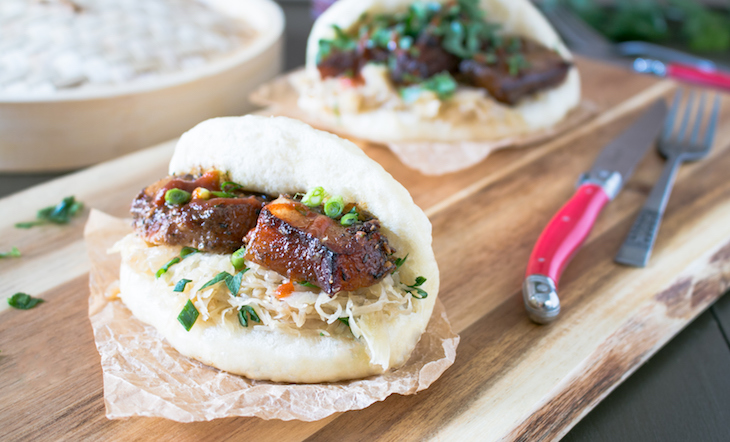 On the Menu: Pork Buns with and Spicy Miso Mayonnaise