Joy and Pain on the Plate

Chris Scott, Omar Tate, and Kurt Evans get vulnerable at the Beard House

When we say the James Beard Foundation is about good food for good, it’s not limited to sustainable agriculture, the Farm Bill, or reducing food waste. Another important aspect of our mission is highlighting the myriad hands that are helping to shape American cuisine. Below, Korsha Wilson unpacks the inspiration behind the recent Modern Griots dinner at the Beard House, and how chefs Chris Scott, Omar Tate, and Kurt Evans used their menu as a vehicle for exploring the experience of being a Black chef in America.

“I’m hardly [ever] nervous, but with this dinner and what it means, I’m nervous,” Chris Scott, chef and owner of the late Butterfunk Kitchen in Brooklyn, says to me over the phone on a recent evening. Last month at the Beard House, he served a six-course “Modern Griots” dinner in collaboration with chefs Kurt Evans of Drive Change and Omar Tate of Honeysuckle Projects exploring the “joy and pain” of being a Black chef in America. Scott cooked at the Beard House for the first time in 1994 (and many times since), but this dinner was his most personal and the most vulnerable he’s ever been.

Griots are storytellers who use music and oral history to illustrate important lessons and preserve histories for future generations. The tradition is linked to West Africa, where the role of griot was passed down through specific lineages as an important and necessary part of a community. This Beard House dinner is about sharing the stories of these chefs, exploring the intricacies of Black culinary history and traditions, and giving voice to what it means to be a Black chef at this particular moment. In between courses, the men spoke about their dishes and experiences. Spoken word poet Travis Cameron performed, and Tonya Hopkins, an American food historian and co-founder of the James Hemings Society, paired beverages with each course. For Scott, who has been working in kitchens for three decades, it’s the culmination of his own story. “I’ll definitely be wearing my heart on my sleeve that night.”

Who gets to be complicated? To be complicated is to refuse questions resolved with a simple yes or no or labeling of “good” or “bad.” In order to give someone full humanity you have to first see them as multi-faceted, acknowledging the complex aspects of them and their story. Complications are inextricable from humanity in all of its haphazard and messy iterations. In the absence of complication, we draw large brush strokes across entire groups of people and entire cuisines.

Black foodways are rarely portrayed as intricate or nuanced—instead expected to be easy to understand, easy to categorize, and easy to make. Simplicity, often celebrated at the hands of non-Black chefs, is a default descriptor of Black cooking. In truth, Black foodways are a complex web of regionally specific dishes impacted by history and constantly evolving based on forces of the present moment.

Scott sees this dinner as an opportunity to complicate the notion of Black foodways and the narratives of the chefs who cook them. The “Not So’s,” the second course of the evening, looks like a traditional beignet, but features a filling of pickled beef short ribs in a dough made with black-eyed peas. “I want people to break that beignet open and see it’s not what they’re used to,” Scott says.

The fourth course, “Stigma,” a dish of chicken rillettes, chicken skin cracklings, and watermelon vindaloo, speaks to the stereotypes placed on Black cooks. For Scott, it’s a dish that brings discomfort. After a successful run on the 15th season of Top Chef that landed him in the top four finalists, people approached him at events expecting what they’d seen on television. “They wanted my fried chicken and my biscuits and that’s it,” he says. Although he has experience cooking many different cuisines over his 30-year career, Scott felt his story was reduced to just one dish. He wants to talk to diners about this experience and show that he has pride in these ingredients. “I’m getting this stigma out of my system,” he says.

Expectations can also come from other chefs. Omar Tate’s “Notes from a Black Pantry” course, a chilled salad of mustard greens, pickled okra, and a dressing made with common dried pantry spices like garlic salt and lemon pepper, speaks to the way he felt judged by chefs for what he grew up eating, while simultaneously being expected to revere certain European ingredients. "When I became a professional cook, dried seasonings disappeared from my culinary landscape,” he says. This course is about highlighting the brilliance and ingenuity of using these spices. “I want to bring joy and glory to these ingredients on the plate.”

For Hopkins, chefs who “share personal stories that are culturally rooted, relevant, and inherently connected to the broader community” are modern griots. “Particularly as African-American food griots, there’s an added responsibility of reclamation of our historic foodways (sometimes nearly lost, sometimes outright stolen) in addition to helping to preserve our culinary traditions,” she adds. Doing so ensures that the next generation knows they’re part of a long line of multifaceted, complex Black chefs telling their stories through food.

Scott, Tate, and Evans want diners to walk away from this dinner rejecting the oversimplification of Black food and Black chefs. By sharing these stories they’re hoping to lay the groundwork for the next generation of Black chefs to be fully seen. “We want this to be a bridge between the generations,” Tate says.

The dessert course, called “The Benediction,” is a syrup sandwich made with prune butter and sweet potato bread that serves as a testament to the “pleasure, temptation, and vice” of sugar. The dish is a play on French toast,” but still pays tribute to the version Scott grew up eating, a treat born of having little else but stale bread, milk, and sugar. It’s a complicated combination of pain and pride to serve it: “If you grew up broke like I did, you know this sandwich,” Scott says. But he believes it’s also filled with “resilience and triumph,” and will close the dinner with a powerful blessing and culinary benediction.

See what's coming up at the Beard House this month.

Korsha Wilson is a food writer and the host of @AHungrySociety, a podcast that takes a more inclusive look at the food world. Follow her on Instagram and Twitter @korshawilson. 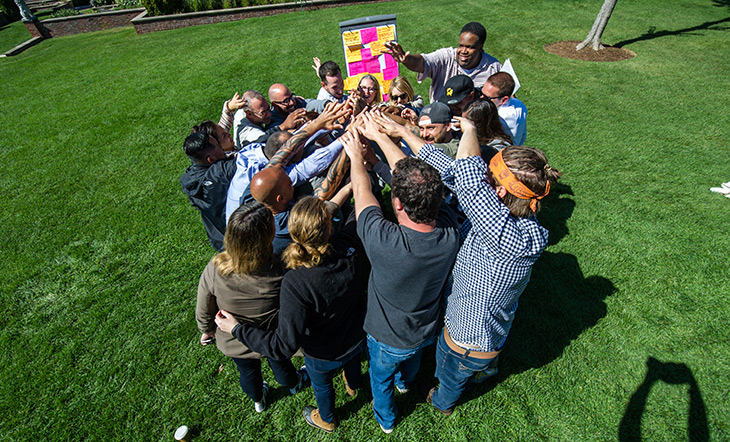 These 15 Chefs are Ready to Step Out and Speak Up