After states lifted Prohibition-era distilling bans a few years ago, craft spirit producers started to crop up in cities all over America. Jamie Feldmar reports on the comeback of the urban distillery.

Well, not exactly; it’s legal. In recent years, a growing number of craft spirit producers have been building aboveboard distilleries in city centers, eschewing wide-open spaces in exchange for the opportunity to connect directly with their customers. Inspired by the do-it-yourself philosophy of the local-food movement, they’re injecting that same spirit into, well, spirits.

During Prohibition (1920–1933), moonshiners illicitly distilled corn mash into low-grade liquor with a smell and taste so strong it’s a wonder anyone wanted to smuggle it at all. After the repeal it became legal to make wine and beer at home, but making spirits without a commercial license was (and still is) a federal crime and was banned by many states.

A few years ago, however, many states began loosening their outdated Prohibition-era laws, allowing small commercial distilleries to open for the first time in decades. With the legal framework in place, small craft distilleries began cropping up around the country.

One such example is Koval Distillery in Chicago, opened by Sonat and Robert Birnecker. The Birneckers were living a fast-paced academic lifestyle in Washington, D.C., when they decided to quit their jobs and move to Sonat’s hometown of Chicago to open a distillery. Robert had grown up helping his grandparents distill whiskey and brandy on their family farm in Austria, and the couple, who were about to have a baby, were looking for a serious lifestyle change. “We wanted to spend more time together, in a family-centric business, doing things the old-fashioned way,” says Sonat.

Since then, they have become one of the country’s foremost distilling consultants, offering sold-out classes and workshops for a growing number of prospective distillers. “People may live in a city, but they still want to create things,” Sonat says.

For New York–based distiller Brad Estabrooke, those words ring true. Four years ago Estabrooke was a Wall Street bond trader who, by his own account, hated his job. “I lived in Brooklyn, and all around me, I saw people involved in craftsmanship. People were actually making things, like chocolate and beer, entirely from scratch. I thought that would be so rewarding, to make something that people really enjoyed, even if I couldn’t make any money,” he says.

In 2008 Estabrooke was laid off and, inspired by a magazine article about the government’s loosening of distilling laws, directed his efforts into building a facility of his own. The decision to stay in Brooklyn came easily—he didn’t want to move, and figured he could tap into the built-in market for handcrafted goods.

By 2010 his Breuckelen Distilling company was up and running, making small-batch gin and whiskey from New York–sourced wheat, rye, and corn in a pot still custom-built in Germany. He hosts weekly tours and tastings as a way for frazzled New Yorkers to come together and meet and drink with their like-minded neighbors. “What’s going on here [in Brooklyn] is special, and people want to be a part of it,” he says.

Other distillers have also drawn inspiration from their surroundings. Tom Burkleaux cites his hometown of Portland, Oregon, as the catalyst for founding New Deal Distillery way back in 2004. “At the time, there were no craft brands in the spirit world; there was no one to talk to about it,” Burkleaux says. Nevertheless, “the environment really encourages artisan companies,” he says.

Burkleaux also credits the craft brewery movement of the 1980s with paving the way for small distilleries like his to thrive. “There’s a deeply rooted belief in Portland that you can make anything,” he says. “There was never any question in my mind that I’d open anywhere but here.”

New Deal produces a full line of pure and pepper-infused vodkas, whiskeys, rums, and organic liqueurs. It was a founding member of Portland’s “Distillery Row,” a nonprofit trade association between six craft distillers, all located within blocks of each other. Visitors can take tours of all the distillers, who work together to promote their products and trade knowledge and tips.

“I’m very social, and I want to have a direct connection with customers, which I can’t do if I’m making spirits in the middle of nowhere,” Burkleaux says. “The question is not ‘Why are there now more city distilleries?’ It’s ‘Why didn’t more people distill in the city before?’”

Jamie Feldmar is a freelance writer living in Brooklyn. 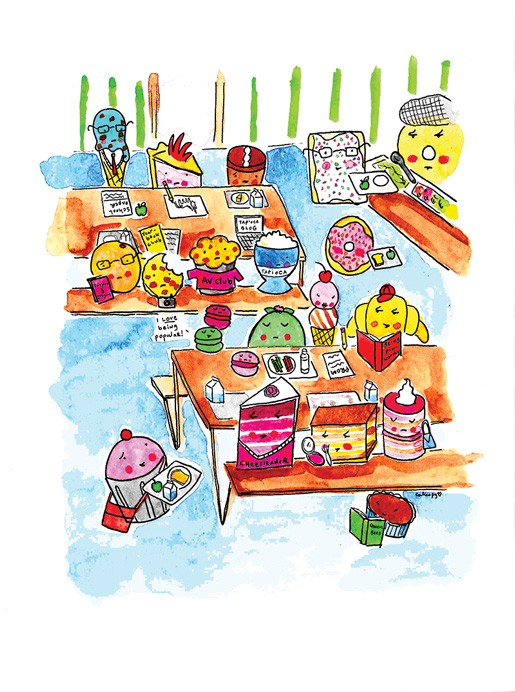 The In Crowd at Dessert High