The 2018 JBF Publication of the Year: The Salt 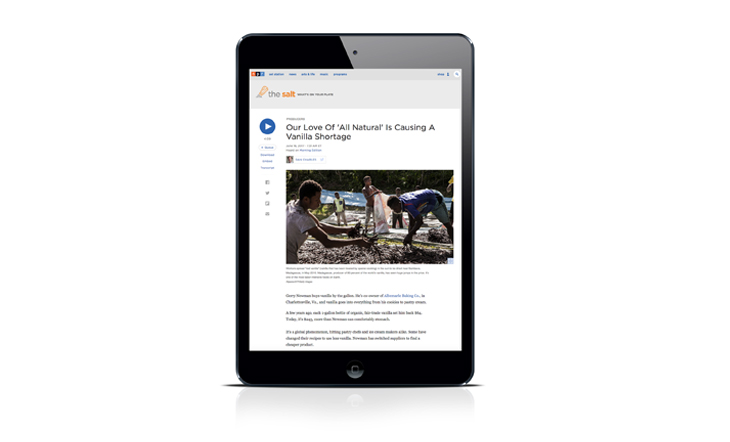 Every year, the Journalism Committee of the James Beard Foundation awards Publication of the Year to a media outlet that has not only published exemplary food journalism, but displayed inspirational leadership in exploring fresh directions while also adhering to strong ethical guidelines.

The 2018 Publication of the Year is The Salt, a news site from the National Public Radio (NPR) science desk that covers food news from the farm to the plate and beyond with “a pinch of skepticism and a dash of fun." More than a blog, The Salt exhibits a commitment to exploring the world’s foodways and underrepresented cultures with voice-driven writing, fresh reporting, and diverse perspectives.

The editorial team, led by Maria Godoy, boasts a strong roster of seasoned NPR journalists while providing a platform for new voices and up-and-coming freelancers. From a Vietnamese–American restaurateur’s searing essay on the hidden costs of cheap immigrant-run restaurants, to a Nigerian-born chef’s tale of exploring the foods of Appalachia with a “hillbilly hipster,” The Salt invites everyone to the table to discuss what it means to be, and to eat like, an American today.

Other 2017 news stories focused on the worldwide shortage of vanilla, investigated the use of antibiotics on farm animals, explored how a restaurant made a small town in Maine a major dining destination, and even suggested Star Trek–inspired recipes keyed to the season finale of Star Trek: Discovery. What other publication shows such love to its geek-leaning readers?

The publication’s multimedia approach makes its great journalism admirably accessible; not only can anyone listen to the stories on NPR, but they can also access original print content online for free. A pinch of The Salt brings out the truest flavor of every story.