The 2019 JBF Publication of the Year: The New York Times 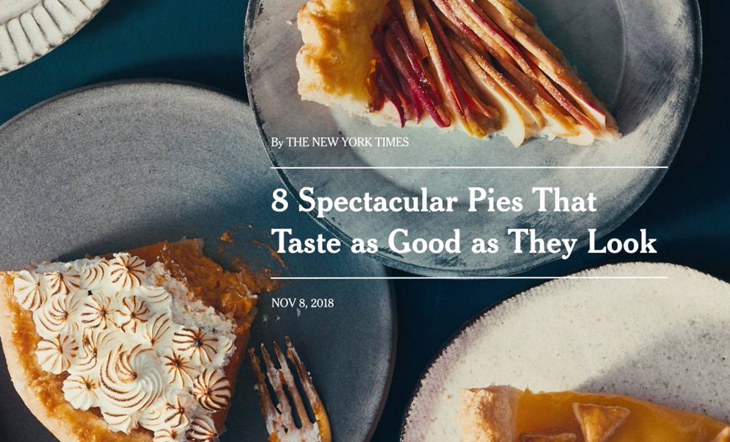 Every year, the Journalism Committee of the James Beard Foundation awards Publication of the Year to a media outlet that has not only published exemplary food journalism, but displayed inspirational leadership in exploring fresh directions while also adhering to strong ethical guidelines.

The New York Times has shown what can happen when a legacy media company invests in its food and drink coverage. For years the Times Food section, under the leadership of Sam Sifton, has been expanding its reach, with a robust team of reporters and reviewers covering local, national, and international food stories like no other publication in America. So why single it out this year? Because we’ve been impressed with the ways in which the Times team has lately doubled down on both print and online journalism, finding the most effective and appealing ways to present stories, reviews, and recipes for maximum impact and reading (or viewing) pleasure. A lot of smart, creative thinking and no small measure of chance-taking has gone into these efforts. For this reason, the New York Times Food section earns the James Beard Foundation Journalism Committee Publication of The Year.

The New York Times engages audiences on multiple platforms—from print to push notifications—with storytelling concepts that give consideration to reader experience wherever they are. The Thanksgiving Pies edition of their Food section was not just a delightful shift from turkey and gravy—the jaw-dropping companion how-to videos were matched by a fold-out section that made it the talk of food Twitter.

The Times’s decision to realign its talent by moving Tejal Rao to Los Angeles shows a respect for the Los Angeles restaurant scene, and gives national audience readers a voice from the West Coast communities.

This commitment to reporting talent also is apparent in the backgrounds of their contributors, resulting in the delightful lens into the African-American tradition of holding late summer fish fries from Korsha Wilson, and the profile of Nite Yun, chef of Cambodian restaurant Nyum Bai in Oakland, California by Mayukh Sen.

The Times shows us the diversity in food as a topic, such as the geopolitical implications of sipping Venezuelan rum by Danny Hakim and Priya Krishna’s examination of the impact of plastic straws on the environment. Still, in the age of crowdsourced opinions and performative star ratings, the critical reviews and columns by Ligaya Mishan take audiences on city-wide excursions, using her food expertise to connect New York neighborhoods.

Further, through its Cooking vertical, the Times has set a benchmark for content development by building a business case for indispensable journalism that pays for itself in subscriptions. The multiplatform approach to cooking, supported by the clever observations by Sam Sifton in the newsletter, a captivating Instagram feed, and the recipe expertise and instruction from Melissa Clark incorporates news into food habits.

The New York Times’s food coverage is reaching beyond the food world. Their efforts are building long-term relationships with readers in ways that galvanize trust and loyalty in a news organization. Their leadership and excellence should be emulated throughout the industry.