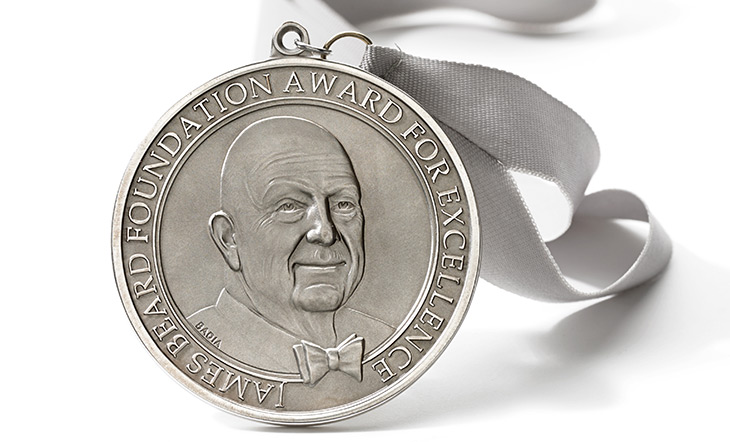 The James Beard Foundation is thrilled to announce the five leaders whose tireless and meaningful work will be honored at the ninth annual Leadership Awards ceremony and dinner in Chicago on Sunday, May 5, 2019 at The Dalcy. Culinary expert, food writer, author, and dynamic television personality Gail Simmons, of Bravo’s Emmy-winning series Top Chef, will serve as the master of ceremonies for this year’s Leadership Awards.

This year’s recipients are:

The Pioneer Valley Workers’ Center
The Pioneer Valley Workers’ Center (PVWC) builds the collective power of workers and immigrants in Western Massachusetts and beyond. PVWC’s worker leaders develop and organize grassroots campaigns for food chain workers’ rights, including winning wage theft protections, stopping deportations, and building new worker cooperatives. Campaign victories lay the groundwork to recruit and develop new leaders and build a multiracial working-class movement to dismantle the root causes of exploitation and oppression. Worker-led campaigns are supported by PVWC’s innovative solidarity and interfaith rapid response networks of 2,500+ individuals and participants from over 30 congregations. All aspects of PVWC are coordinated by the Mujeres Guerreras, a five-person, all-women’s organizing collective; some are mothers, some are immigrants, some are queer, and all bring deep experience in worker, union, immigrant, faith, and environmental organizing.

Cornelius Blanding
Executive Director, Federation of Southern Cooperatives / Land Assistance Fund
Cornelius Blanding is the Executive Director of The Federation of Southern Cooperatives / Land Assistance Fund, a non-profit cooperative association striving toward the development of self-supporting communities through cooperative economic development, land retention, and advocacy in order to increase income and enhance other economic opportunities for low-income African American and other limited resource communities across the South. Federation/LAF is the only organization in the United States where its primary objective is the retention of black-owned land and the use of cooperatives for land-based economic development. In addition to his tireless work in the Southern US, Blanding has worked to develop and strengthen cooperatives in many countries including US Virgin Islands, Cuba, Haiti, and Africa to address concerns to improve food sovereignty in economically challenged communities.

Leah Penniman
Co-Executive Director & Program Manager, Soul Fire Farm
Leah Penniman is a Black Kreyol educator, farmer, author, and food justice activist from Soul Fire Farm in Grafton, NY. She co-founded Soul Fire Farm in 2011 with the mission to end racism in the food system and reclaim our ancestral connection to land. As co-Executive Director, Leah is part of a team that facilitates powerful food sovereignty programs - including farmer training for black & brown people, a subsidized farm food distribution program for communities living under food apartheid, and domestic and international organizing toward equity in the food system. Leah has been farming since 1996, holds an MA in Science Education and a BA in Environmental Science and International Development from Clark University, and is a Manye (Queen Mother) in Vodun. The work of Leah and Soul Fire Farm has been recognized by the Soros Racial Justice Fellowship, Fulbright Program, Grist 50, and Presidential Award for Science Teaching, among others. Her book, Farming While Black: Soul Fire Farm's Practical Guide to Liberation on the Land was released in Fall 2018.

Sean Sherman
Founder & CEO, The Sioux Chef
Sean Sherman, Oglala Lakota, focuses on the revitalization and awareness of indigenous foods systems in a modern culinary context, a mission which led him to create the company The Sioux Chef in 2014. Sherman has studied extensively to determine the foundations of these food systems which include the knowledge of Native American farming techniques, wild food usage and harvesting, land stewardship, food preservation, regional diversity, Native American migrational histories, along with indigenous culture and history in general to gain a full understanding of bringing back a sense of Native American cuisine to today’s world. In 2018, Sean co-founded the nonprofit NATIFS (North American Traditional Indigenous Food Systems), which this year is in the process of opening a not for profit indigenous restaurant and training center called Indigenous Food Lab.  His vision is to open Indigenous Food Lab’s in cities across North America with the focus of helping regional indigenous communities to develop healthy community based indigenous food businesses, to help bring much needed economic opportunities, influence healthy culturally appropriate diets, and re-identifying true cuisines of the Americas. In 2018, his book The Sioux Chef’s Indigenous Kitchen won the James Beard Award for best book in the American category.

Anim Steel
Co-Founder & Executive Director, Real Food Generation
Anim Steel is the co-founder of Real Food Generation (RFG), an organization harnessing the power of youth and universities to create a food system that truly nourishes us all: one that is defined by food sovereignty, and not the “Big Food” agenda in the United States. RFG's key initiatives include the Real Food Challenge, a student-driven campaign to expand local and sustainable food purchasing on university campuses; the Real Meals campaign, an intergenerational coalition that opposes deals between cafeteria corporations and the Big Food corporations that lock out community producers; and the emerging Uprooted & Rising movement fighting Big Food and white supremacy in higher education. Anim is the former Director of National Programs at The Food Project in Boston, MA and co-founded the HEAL Food Alliance.

The Leadership Awards raise awareness of timely industry issues by celebrating the visionaries responsible for creating a healthier, safer, and more equitable and sustainable food system. Honorees can be recognized for showing emerging promise or specific outstanding initiatives, as well as for bodies of work or lifetime achievement. Excellence of work, innovation of approach, and scale of impact within a community or the nation were among the criteria used to choose this year’s honorees, selected by ballots submitted by past recipients. The Leadership Awards are part of the James Beard Foundation’s Impact Programs, which works to establish a more sustainable food system through education, advocacy, and thought leadership.

Why You Should Pay Attention to Indigenous Cuisine