In his iconic tome, Beard on Food, which was first published in 1974, our namesake wrote prolific prose on a vast landscape of culinary topics, from a lesson in chicken anatomy to a sandwich manifesto to the pleasures of bacon, which we share with you today. Humorous, erudite, and timeless, this collection of essays remains an indispensable resource for the home cook. Stay tuned for more!

Beard on Food: The Friendliest Meat

I’ve long said that if I were about to be executed and were given a choice of my last meal, it would be bacon and eggs. There are few sights that appeal to me more than the streaks of lean and fat in good side bacon, or the lovely round of pinkish meat framed in delicate white fat that is Canadian bacon. Nothing is quite as intoxicating as the smell of bacon frying in the morning, save perhaps for the smell of coffee brewing.

While bacon doesn’t always taste as good as it smells, for there are many grades and varieties, many ways to cook it—and many ways to ruin it—by and large this is probably one of the most satisfactory of our traditional meats. Our ancestors practically lived on it. For the homesteader, a side of bacon was a treasure, for it meant meat—if not variety—a meat that could be eaten for every meal, with the fat used to fry fish or potatoes, or to make biscuits.

Bacon has probably more palate appeal than any one other meat. Think of the ever-popular “BLT with mayo,” a toasted sandwich of bacon, lettuce, tomato, and mayonnaise. Add some sliced turkey or chicken breast, and you have the noble club sandwich. Then there’s that earlier popular snack, the cheese dream, a great combination of Cheddar cheese, bacon, and sliced tomato. Bacon has also figured in the annals of the hamburger. A great favorite of mine at the New York restaurant Maxwell’s Plum is a large hamburger with crisp bacon and melted cheese on a well-buttered bun, a superb merger of flavors and textures. You bite into the cheese, and as its smooth melting quality flows into the juicy hamburger, you suddenly hit the crisp bacon—a royal pleasure.

Recently I was sent a beautiful side of Canadian bacon, an excellent loin, that was just delicious baked in a piece, like a small ham. There was this gorgeous bacon, with all the attributes of fine ham, and an even more tender, luscious texture, so, I reasoned, why not use it instead of ham in a Croque Monsieur, that deliciously crisp, crunchy French sautéed sandwich?

For a variation on Croque Monsieur, I lightly buttered two slices of homemade bread with the crusts on, put between them two pieces of Canadian bacon, which I had previously broiled lightly, topped them with one healthy slice of Swiss Gruyère cheese (you could use Emmenthaler, Fontina, or even Münster, but I like Gruyère best for this), pressed the top slice down firmly, buttered the outsides of the bread, and sautéed the sandwich until it was crisp, brown, and buttery on each side, with the melted cheese lovingly embracing the bacon.

Garnished with parsley and a few olives or pickles, and eaten hot with a glass of chilled white wine or beer, this is a classic luncheon or snack that can’t be bettered, utterly seductive to the bite.

Bacon is a most adaptable meat, whether you buy the paper-thin packaged type or the kind that comes in a slab and is cut medium-thick or thick. Personally, if it is a good smoky bacon, I like it cut thick and broiled. With eggs fried in butter and home-fried potatoes, what a breakfast it makes! Medium-thick bacon I sometimes bake in a 350-degree oven until it is not too crisp and not too limp, just in between. To me, bacon that is too crisp loses its quality and flavor and becomes quite disagreeable. For this reason, I recommend broiling paper-thin bacon. You can experiment with timing until you get the texture you prefer.

Even more popular than bacon and eggs in England and Canada is bacon with fried or broiled tomatoes, rather like having a bacon and tomato sandwich without the lettuce and mayonnaise, and with the toast on the side. Four rashers of bacon, four slices of fried tomato, crunchy rye or whole-wheat toast—that’s a fine way to start the day.

Bacon adds so much flavor to other foods. I love to cover a roasting chicken with bacon slices, draping them over the breast and sides, removing them for the last third of the cooking so the bird can have its final browning and basting. I lace kidneys with bacon or skewers, broiling them together until it is hard to divorce one flavor from the other. Who could imagine sautéed liver without its ally—strips of bacon? And what fisherman doesn’t revel in bacon and fresh-caught trout, rolled in cornmeal and cooked in the bacon fat until the outside is crispy brown, the inside moist and tender? Bacon is perhaps the most friendly of all meats because it combines so freely and easily with other foods. 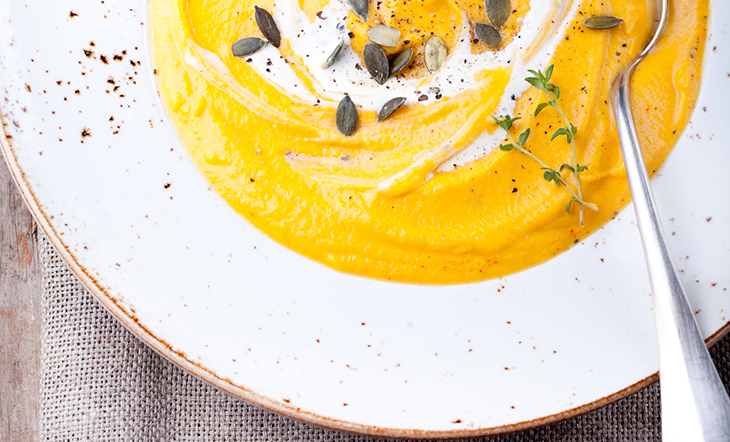 On the Menu: Butternut Squash Bisque with Benton’s Bacon 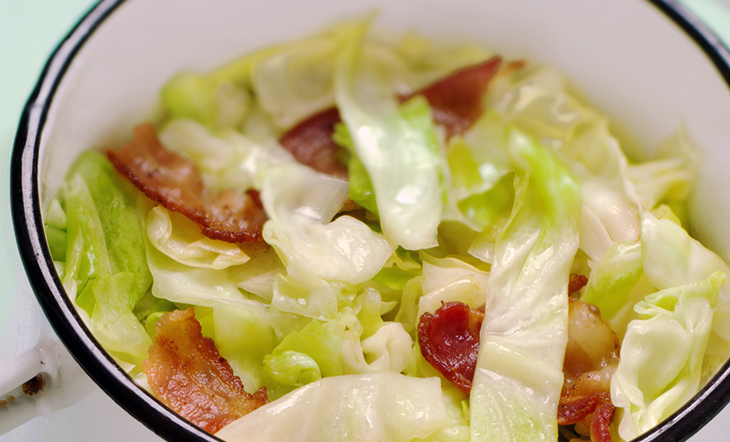