The Path to Stepping Out and Finding Your Voice

The James Beard Foundation is committed to supporting women in the food and beverage industry, from chefs and restaurateurs to entrepreneurs dreaming up new ways to make our food system more diverse, delicious, and sustainable. Our Women’s Leadership Programs (WLP) presented by Audi, provide training at multiple stages of an individual’s career, from pitching your brand to developing a perspective and policy on human resources. As part of the Foundation’s commitment to advancing women in the industry, we’re sharing stories from female James Beard Award winners, Women’s Leadership Program alumni, and thought leaders pushing for change. 2015 Women in Culinary Leadership (WCL) mentee Katrin Syndor returned to the Beard House this fall to cook alongside her current employer, Cheetie Kumar of Garland in Raleigh, NC. We chatted with Syndor about her WCL mentorship under chef Anthony Lamas of Louisville's Seviche, her career moves since then, and why she likes having a female boss.

JBF: It’s been a couple of years since you went through WCL. What were the best lessons you got from the mentorship process? Is there anything that you feel like you’re still using in your professional life today?

Katrin Syndor: I really enjoyed being able to learn all of the stations in the kitchen. I haven’t had the opportunity to work on all of them since, because I went back into pastry instead of staying in hot line or savory cooking. Right now I’m at a bakery, and it’s different, because there are no stations. I also learned how to work more quickly and efficiently. I had never worked in a high volume restaurant before WCL. Before the program, I worked at a hotel that did large banquets, but not 300 covers on a Saturday night where everything has to run smoothly.

JBF: How did the WCL experience affect your view of your career? Do you still have the same goals? Did it open up new avenues to you?

KS: Right after the program ended Anthony [Lamas] offered me a job, but I ended up going back to the hotel that I had been working before WCL. So it didn’t help me immediately, but I’m now to the point where I’m using all of the things that I learned in Anthony’s kitchen and trying to broaden my wheelhouse. For example, [Anthony] had a really high standard for cleanliness—that kitchen is by far the cleanest kitchen I’ve ever been in. Everything’s on wheels, and so every night we pulled everything from the wall and cleaned the walls and behind all the equipment. I’ve definitely taken that with me other places—just a little bit of effort at the end of the night gives you a far superior-looking kitchen.

I’ve only been at Monuts, the bakery that I work at as my full-time job, for about a year. It was a big change from working in a hotel to working in this small bakery that is mainly a doughnut shop. I had never rolled doughnuts before! I’m also working part-time at Garland doing their pastries, and there is an opportunity for me to work the line a bit, if I want. So, I’m not sure exactly what direction I’m going to go in or have a five-year plan yet because there are so many options—which is not a terrible situation to be in.

JBF: Tell us a bit more about Monuts, and why you wanted to get involved with that business.

We work 36- to 38-hour weeks, give or take. They want to avoid us being overworked, so that we can go out and work in the community, or have fun, or build a family. Before, I was working so much I couldn’t even have my own dog, and because of Monuts, I now have started fostering them!

JBF: And how did you end up with a side gig making pastry for Garland?

KS: My old boss from the hotel left and started his own place in downtown Raleigh, and he recommended me to Cheetie [Kumar, chef/owner of Garland]. I started working for her part time, and from the moment I walked in there was such a sense of family in the restaurant, especially in the kitchen.

JBF: You’re now working at two different places that have female co-owners and female chefs. Do you think that going through the WCL program had any impact on the fact that you ended up working for women?

KS: I think so. Working for Cheetie just kind of fell in my lap, but she really has helped me with my confidence, which is something I had worked on with [chef de cuisine] James [Moran] at Seviche during the program. The whole reason that I sought out the Women in Culinary Leadership scholarship was because I wanted to step outside of the hotel space and learn about and experience new aspects of the restaurant industry.

After WCL, I ended up going back to the hotel I had worked out before the program, for a number of reasons, but I felt like I had learned a lot and was waiting for the right opportunity. I just happened to get the part-time job with Cheetie, and she really helped me see things from a different perspective and feel more confident. When I was ready to leave the hotel, I went to her for advice and I told her, “I don’t want to work for a man anymore. I’m done.” And she told me, “Okay, let’s figure this out.”

I really do enjoy having a strong female leader. It’s not even that they’re “maternal,” but to me, female bosses feel like if they take care of you, you will do good work and it will make their job easier. Instead of micromanaging or going the opposite direction and thinking, “Well, if I break them down I can build them back up,” the female bosses I’ve worked with have been like, “Let me just keep building on what I’ve got.”

JBF: If you were able to give advice to a woman just starting in the industry, what would you tell them? Is there something you wish somebody had said to you five years ago?

KS: Your voice is louder than you think it is. Once you find it, you can pretty much do anything. As long as you’ve found your voice, people will listen to you.

Editor's Note: After recently leaving Monuts, Katrin is splitting her time between pastry duty at Garland and her new candy bar company, Way Out. Follow them on Instagram. 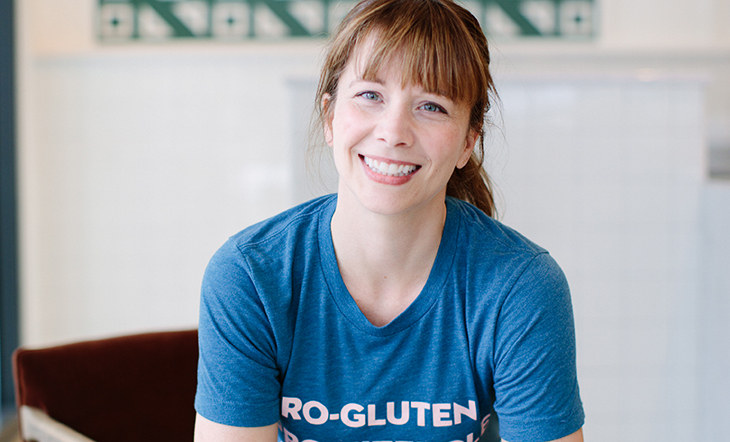 This Initiative is Strengthening the Supply Chain