The Queen of Pork and Her Fight for Farmers

Duskie Estes spent over two decades as a staunch vegetarian, but you’d never know it nowadays. The JBF Chefs Boot Camp for Policy and Change alum and chef at Zazu Kitchen & Farm raises pigs in her backyard, owns a bacon company, and was once crowned the “Queen of Porc” at the Grand Cochon in Aspen. Since returning to a meat-eating lifestyle, she has made it her mission to raise the profile of small-scale producers in Northern California, and recently spearheaded a successful effort to change Marin County regulations around small-farm slaughter. We spoke with Estes about her relationship to meat, the challenges small farmers face around processing their animals, and how one individual can affect change in their own community.

JBF: Tell us about the transition from being a vegetarian to wanting to raise animals for meat. Was there a particular moment where you felt your views shift?

Duskie Estes: If you grow up in California, it’s basically a rite of passage to be a vegetarian at some point. I was a vegetarian for 23 years, because I felt like I couldn’t personally take a life, and so I shouldn’t be allowed to eat an animal if I couldn’t kill it. But I also fell in love with the idea of being a chef, and I wanted to be able to feed all people, not just vegetarians, so I ended up as executive chef at Tom Douglas’s Palace Kitchen in Seattle. At the time, it was the meatiest restaurant in town, where a different whole animal came off the rotisserie each night.

At one point during my time at Palace kitchen, my husband John [Stewart] and I got invited to ingredient-sourcing guru Jeff Bergman’s house for dinner. At that point, no one else in Seattle (besides Tom) knew I was a vegetarian. John had become interested in charcuterie and all things pig, and I was the chef at a whole-animal restaurant, so, no surprise, pig was the main course. Jeff had cooked a pork shoulder with onions and balsamic for over four hours, and then drizzled a hundred-year-old balsamic over it. I kept glancing at John, trying to figure out what to do, because we felt very lucky to be at this dinner. There were only four of us at the table: Jeff, his wife, John, and me. There wasn’t a dog that I could sneak bites to, and to leave food in my napkin was going to look crazy. In the end, I took a bite, and it was incredible. I ate the whole plate. And that was the end of being a vegetarian.

Now we live California and raise animals in our backyard. I’m very committed to the motto that animals should have a great life and only one bad day. All the animals we work with are raised with access to pasture, and we don’t believe in gestation crates for pigs. We respect the gifts of the animals’ lives by making sure they live well and by using every single part. Zazu is not a restaurant where you can just order pork chops: there are ears, face, tail, heart, and more on the menu.

JBF: What was the landscape for animal slaughter in Marin County before the recent vote over changing regulations for small farmers?

DE: Many states have only one USDA slaughter facility, and so some small farmers have to travel hours to get to it, which is both expensive and bad for their animals. The USDA does have some exemptions that allow for on-farm slaughter of poultry, and for selling your meat to HRI (hotel, restaurant, and institutions), which gets around the requirement that meat sold in the U.S. has to go through a USDA plant. The issue with that is that only nine states take advantage of the HRI exemption, and California is not one of them. There’s a county-by-county patchwork of regulations, in terms of who takes advantage of the exemptions that exist in the national register.

JBF: How did you get involved in the fight to change regulations around small-farm slaughter?

DE: I was inspired to take action because of my experience at Boot Camp and my own passion for supporting these kinds of farms. Raising animals on pasture as a small farmer makes your product up to five times more expensive than commodity meat. That means you need to educate consumers about the value of what you’re doing—what the long-term cost of cheap food is, and why they need to pay that higher price for your product.

I hosted meetings with politicians, ranchers, and farmers: one with our congressman Jared Huffman, and one with our state assemblyman Marc Levine. We asked Huffman to reintroduce the Prime Act, which he had previously supported. We asked for broader use of the USDA exemptions for poultry, and for exemptions for four-legged animals based on the same model. We also asked for a modification of the HRI exemption to include value-added processing. Right now it’s only for whole-animal cuts, which leaves out sausage, bacon, cured meats, etc. We asked Mark Levine to enable farmers to take advantage of the HRI and the on-farm poultry slaughter exemptions on a statewide level, rather than having to fight battles county by county.

JBF: How did you hear about this particular vote?

The agricultural ombudsmen of Marin County and Sonoma County came to those meetings, and Vince Trotter, from Marin County, told us about an upcoming local vote about slaughter issues. Vince later put the call out for people to send letters to the Marin County Board of Supervisors about these permitting issues, and I reached out to all the famers, ranchers, policy people, chefs, and butchers in nearby counties that I knew. I also spoke to the Good Food Awards and Farm Aid folks and asked them to send letters and attend.

90 people showed on the day of the vote! There were four issues we were fighting for, and we only lost one: a permit for a new brick-and-mortar slaughter facility in Marin County. But we got the three other pieces: first, allowing Marin County farmers to take advantage of the USDA exemption for on-farm poultry and rabbit slaughter. There was a big battle over rabbits, so having them included was a big win.

Second, we got the county to allow mobile slaughter units. It’s costly to do mobile slaughter, so it’s not necessarily financially viable for the farmers, but there are these new units, called “Plant in a Box,” that are potentially more affordable. It was important to at least have the option of these units, especially if we’re not allowed to have another brick-and-mortar facility.

The third piece allowed for farm tours without the extensive permitting process that had been initially proposed. To keep local food alive and well, it’s important to be able to get people on your farm and educate them.

I was taught that you always send thank-you letters. So when I was at Boot Camp and Kris [Moon] and Katherine [Miller] said, “Don’t send us thank-you letters, do something,” that really sunk in. I’m maxed out, in my own business, family, and farming, but whenever I have a free moment, I try to put it somewhere useful. I spent months emailing all of these people to try to get then to come to that vote, and it was awesome because they actually did.

JBF: What are the next steps on this issue for you?

DE: My next goal is to try to figure out how to tackle this issue in Sonoma County. It turns out that in addition to basic slaughter units, there are also mobile containers outfitted for the value-added piece of animal butchery. There are none in California yet, but I’m in conversation with the manufacturers and a couple producers in Northern California, to try to figure out how we could bring them to Sonoma County. We’d have to go through extensive permitting and regulation changes to allow for that, so I’ve been talking to the county ombudsman.

JBF: Do you feel like there’s anything that consumers or diners could do to support changes in the regulations around slaughter for small farmers?

DE: Take responsibility for the path of your dollar: don’t buy commodity meat. When I go somewhere and I don’t know how the meat was sourced, I eat vegetarian. When you go to a grocery store, don’t buy meat if they can’t tell you where it came from or how it was treated. Buy your meat from small butcher shops that buy direct from farmers, even if it means making two trips. Whole Foods does verify animal treatment and sourcing, so if you can’t go to a farmers’ market or butcher shop, then buy meat at Whole Foods. And above all, eat less meat. People argue that it’s too expensive, but cheap food has long-term costs that people don’t recognize, so you need to make meat more affordable by eating less of it. We don’t need to eat eight to 12 ounces of meat at a meal—three is fine. So eat less meat, eat more vegetables, and only allow yourself the right kind of product.

On the political side, send letters to your state politician or your county supervisors when you know that votes are coming up. And get off your butt—there’s nothing more powerful than going to the city council meeting and saying something. Use your voice and be present. 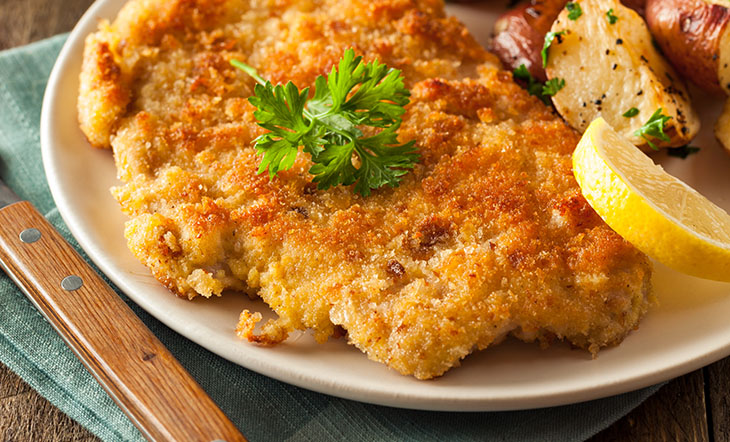 A Southern Standby with a Sustainable Twist