These Chefs Have Diplomacy on the Menu

While in Hermosillo, Mexico, on a culinary diplomacy mission for the U.S. Department of State, our chief strategy officer Mitchell Davis chatted with visiting chefs Traci Des Jardins and Mary Sue Milliken about the concept of diplomacy through food. Both Des Jardins and Milliken are James Beard Award winners, and Milliken is a trustee of the Beard Foundation.

Hermosillo is the capital of the Sonora region of northern Mexico, known for its desert climate, cattle, and wheat production. Just five hours south of Tucson, Arizona, the area’s culture and cuisine share much with its neighbor to the north. Beef is the principal protein and the local tortillas are made from wheat. The State Department’s program had Des Jardins and Milliken work with local nonprofit the Ganfer Foundation in support of their women’s entrepreneurship programs in food and cosmetology. Des Jardins and Milliken spoke at two local culinary schools, and participated (along with Beard Award winner Chris Bianco) in Ganfer’s annual Festival del Chefs.

The conversation below, which has been edited for length and style, took place while Des Jardins and Milliken prepared dinner in the kitchen of U.S. consul general Elia Tello’s residence using local Sonoran shrimp and asparagus.

JBF: What does the phrase culinary diplomacy mean to you?

Mary Sue Milliken: To me, culinary diplomacy means connecting people through their most primal, joyful thing—food.

Traci Des Jardins: I’ve always traveled and I see the world through the lens of food. I think there is an opportunity to convene around the table over food. Everybody eats, so food is something everyone can relate to.

JBF: Is it important, as an American chef, to get out into the world? For political or cultural reasons?

TDJ: Absolutely, we can break down cultural barriers. When you share food, share a table, you can really understand how people live. It’s an opportunity to see the world in a different way. To see the world that you don’t know. The primal need of the intake of food breaks down barriers and the sort of biases that you might have in the ways that you think about the world.

MS: For me, travel is my church; it’s my religion. When I travel I realize how small I am, how small my problems are, and how big the world is. So yes, I recommend it for every American,  to get away from their routine and stresses by exploring the world. I think politics is something that is much easier to tolerate when you are sharing food together.

JBF: What are the pitfalls, if any, of going out in the world as American chefs? Are you ever self-conscious about American food culture?

MS: My experiences have been mostly joyful, because people want to share what they eat every day with me. By my showing an interest in what they are doing, it seems like it just opens doors.

TDJ: I think that, for better or worse, there’s a great curiosity about what we do in the United States. Being able to have that conversation and express interest in other cultures in what they are doing as far as food goes is a great opportunity to not only share what we do, but to see and express to them that we care about what’s going on everywhere else in the world, as well.

JBF: What about your role as women chefs? Does that open doors or close them?

MS: Gosh. You know I don’t know how many it’s closed, but certainly the kind of food I’m most interested in, which is the food that real people are cooking, those doors probably open much more freely because I’m a woman. Maybe the three-star Michelin restaurants, where there’s more of a patriarchy, maybe I haven’t had as much access to those. Come to think of it, maybe that’s why I’m not as interested in fancy food…

TDJ: You know, traditionally, in almost every culture, the women are really the cooks. And even though we see the men in white coats as the chefs, I think the real opportunity to understand food culture is through women in kitchens. If you find the women who are cooking, you can really understand what the food culture is about.

JBF: You are not only both successful chefs, but you also both own your own restaurants—entrepreneurship is part of what you are here to talk about.

TDJ: I’ve learned with my work through La Cocina in San Francisco that we can make dreams come true. These women come from countries from around the world with aspirations around a food business. And those dreams can come true no matter where you are from.

MS: I think it is important for us to act as role models wherever we go. Sometimes all it takes for a young girl is to get to know an accomplished woman, being her own boss and succeeding in a relatable business.

MS: The first thing that comes to mind is toasting. For example, you toast rice before you add the broth. You toast chiles. You toast bread. You toast tortillas. There’s a roasty-toasty kind of thing that just goes throughout the entire cuisine. All the nuts are toasted, all the seeds, everything. It amplifies flavors and it’s something I’m thankful I learned early on from my travels here.

TDJ: I think I could spend the rest of my life trying to find those little pockets and corners where they’re cooking amazing food here. And I think the world is finally starting to pay attention to that and be really curious about what is happening in Mexico, as far as food goes. There’s such a rich and deep history and culture here. It’s very inspiring.

JBF: Conversely, what do you think American chefs might be able to teach Mexican chefs?

TDJ: I think diversity of products. If there is any sort of fault to the cuisine it’s sort of staying in a narrow track. And I think that expansion is already starting to happen, as they’re starting to look to the world for different products, different fish in the ocean. Traveling to Mexico throughout my life I’ve seen maybe ten different fish. And there are lots more out there. And so there is a lot of discovery that can happen.

MS: And I think there is a gourmet food awakening, an explosion happening in Mexico. Which is super exciting because the products and the history and the traditions are all here, but they are now adding in a whole new layer of techniques and ideas and combinations, so it just gets more and more exciting to eat in Mexico.

JBF: What other culinary diplomacy experiences have you had? How did they affect you personally? Professionally? How you cook?

MS: I’ve been in Italy several times with the U.S. State Department, working with refugees in Sicily, and with culinary schools in Naples. But the big trip that really changed my world was Pakistan, where I was able to exchange ideas with a culture that was quite far from anything I’d ever experienced. Yet everything was still so familiar. And that is what is so incredible about culinary diplomacy. You don’t speak the same language, you don’t really know each other’s customs. But the cilantro is the same there as it is here. So there is something that ties you together, a commonality.

TDJ: If you study cuisines around the world, it’s really interesting to pull up the threads of similarities. There are so many similarities between Pakistani food and Mexican food, for example. There are maybe three different ingredients that don’t exist in Mexican food, but there’s so much crossover, and you start to see the map of the world through food, and realize how food is ancient history. You start to contemplate—how did that happen? How can it be that a place is so far away, but we are really so close together? That’s exciting to me. We are super connected. We are all coming from the same place. How can we accentuate that more in the world?

JBF: Let’s talk about the concept of culinary appropriation, which is so much in the ether these days. Mary Sue, you came to Mexican food through your travel and experiences. Tracy you have a Mexican heritage, but you came to French food as an outsider. We don’t usually think of that as culinary appropriation, but rather culinary aspiration. What your thoughts are about this moment we are in? And maybe through your experiences, how do you help people navigate their own way through the cuisines and cultures that excite them?

TDJ: I think it’s like anything, don’t be judgmental. If people approach a cuisine or a culture without a super deep knowledge, but they have a great palate, and they want to tinker around, and they make great food, than so be it. I don’t think that a chef who hasn’t spent a lot of time in Mexico or doesn’t have a really deep understanding of the flavors should claim it, but that doesn’t mean that they can’t tinker with it. And I think I’ve done a 180-degree turn on this in my own thinking around the subject. I used to feel much more judgmental about it. But I think that there has been a lot of cuisine that has come out of not necessarily a deep knowledge that can still be really good. We have to open our minds to that possibility.

MS: Not only that, but the borrowing, the sharing of techniques and ingredients has been going on for centuries. So who are we to say that it’s not okay? I realize that if that borrowing is going on because of some sort of attempt to suppress someone else’s power, or take away their opportunity to benefit in some way from that knowledge, that’s not okay. Whenever I’m drawing on someone else’s cuisine, I make sure that I give credit. I think about how grateful I am to the Thai street vendor who taught me how to make a green papaya salad, which I came home and made it into a Thai melon salad because I didn’t know where to find a green papaya. That salad became one of the biggest hits on our City restaurant menu for two decades. So I feel like if you really are there and experience something and you bring it home, it’s a huge compliment to that culture and that cuisine and it also makes all of food more exciting.

JBF: What’s number one on your bucket list for culinary exploration?

TDJ: I’m super curious about Peru. I haven’t been.

MS: I’m an Asian food freak. If I’m not going to cook at home, I always eat Asian food of some kind. So Cambodia I haven’t been to, Laos. I want to go to Sri Lanka. I’m really excited to go to the places I haven’t been. I have spent a lot of time in kitchens in Thailand and Japan. But the Japanese kitchen is so subtle and delicate and amazing that it’s a real study. You have to really concentrate.

Join Us On the Road with Taste America 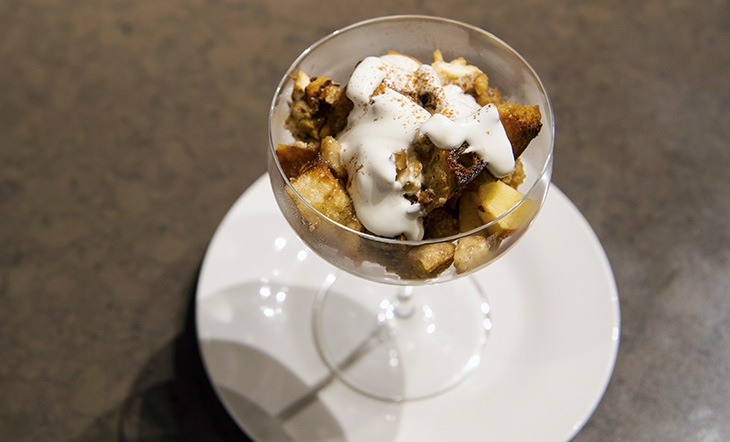