This Award Winner Is Still Growing

The James Beard Foundation is committed to supporting women in the food and beverage industry, from chefs and restaurateurs to entrepreneurs dreaming up new ways to make our food system more diverse, delicious, and sustainable. Our Women’s Leadership Programs (WLP) presented by Audi, provide training at multiple stages of an individual’s career, from pitching your brand to developing a perspective and policy on human resources. As part of the Foundation’s commitment to advancing women in the industry and Audi’s #DriveProgress initiative, we’re sharing stories from female James Beard Award winners, Women’s Leadership Program alumni, and thought leaders pushing for change. Through #DriveProgress, Audi is committed to cultivating and promoting a culture that enables women to achieve their highest potential by removing barriers to equity, inclusivity, growth, and development.

Below, Laurie Woolever delves into the enduring success of James Beard Award winner Naomi Pomeroy, recounting the highs and lows of her nearly two-decade career, from early achievements to personal and professional breakups, to her culinary reinvention at Portland, Oregon perennial favorite Beast.

Chef Naomi Pomeroy is deep into her successful second act as a chef and restaurateur, and wondering aloud whether there might be a third.

“A lot of my chef colleagues are building brands, building empires, and franchising. My ‘brand’ is small, boutique, intimate, and I’m not sure it’s something that can be ‘maximalized,’” she muses.

“I think everyone in this business is asking themselves these longevity questions—about the state of the industry, about the health of our workers. How sustainable is the life that we’ve created? How much will the market bear, in terms of new restaurants? What does it mean to be a ‘classic’ restaurant, and how long does it take until you become that? Will there ever be another Zuni, or Chez Panisse?”

Pomeroy, who received the James Beard Foundation Award for Best Chef: Northwest in 2014, first burst onto Portland, Oregon’s once-sleepy restaurant scene in the early 2000s, spinning an underground supper club and catering business into three beloved restaurants, including the critically-lauded Clarklewis, with her then-husband, Michael Hebb. It was a heady, exciting time, one that Pomeroy describes, in retrospect, “like being on a train without brakes, in part because we were so young. I didn’t have formal training and had never owned restaurants before, and I suddenly had 95 employees. It was too much growth, too fast.”

Following the dramatic and unexpected demise of the business (and the personal partnership) in 2006, Pomeroy regrouped, opening the 24-seat restaurant Beast in 2007, where she and her staff serve a six-course tasting menu at communal tables, with an emphasis on French technique, seasonal produce, and a delicate visual appeal.

In Portland’s increasingly food-obsessed landscape, with new places opening constantly, and at a time when restaurant owners feel the pinch of rising costs and competition from delivery apps, keeping the restaurant open and thriving for over 11 years has been no mean feat. Pomeroy is transparent about what she’s had to do to adjust with the times.

“When we started in 2007, my sous chef and I had an attitude of ‘it’s our way or the highway,’ and for better or worse, people were attracted to it. Our menu said ‘substitutions politely declined.’ We’d pump music in the back at triple volume and have a dance party while we were putting out plates of beautiful food. There were just two of us, working 110 hours a week, and we did it our way out of necessity. We didn’t have time to read reviews. We were busy, I was happy, and what we did seemed to resonate with people,” she recalls. A few years ago, when business began to slightly cool, she took a hard look at everything—online reviews, the way guests were greeted at the door, beloved menu staples—and made a number of tune-ups in response to customer feedback, a process she says was “like going from being a punk band to being on a major label, responsible for stadium tours.

“We had nowhere for people to wait if they arrived early, and it was a little alienating. I realized that we needed to invite them in, give them a little glass of sparkling wine and something to eat, reward them for trying to be on time in a city where traffic can be unpredictable,” says Pomeroy, who also directs waiting customers across the street to Expatriate, the cocktail bar she opened in 2013 with her husband, Kyle Linden Webster. Beast now offers a more casual four-course Tuesday night menu, along with a three-course Sunday brunch.

Pomeroy published her first cookbook, Taste and Technique (co-authored with Jamie Feldmar), in 2016. And in 2017, she and Webster opened a small flower shop, Colibri, as a way to hedge against the rise of automated convenience and indulge her lifelong passion for flowers. “I wasn’t ready to open another restaurant, but I wanted a way to stretch creatively,” says Pomeroy, who reiterates that she hasn’t ruled out the possibility of adding to her business portfolio.

“I’ve looked at hotel projects,” she says, “but it just has to be the right fit. I really want to do what I love every single day. I love the people that I work with, but I’m not sure about the growth part. I’m in the middle of this conversation, with myself, every day. I also keep going back to the spirit part of it. I really love the part of this business that’s about community, and connecting with your neighbors. At Beast, I run an open kitchen so that people can see us working. I think it’s important to put a human face to the people who are cooking your food.” 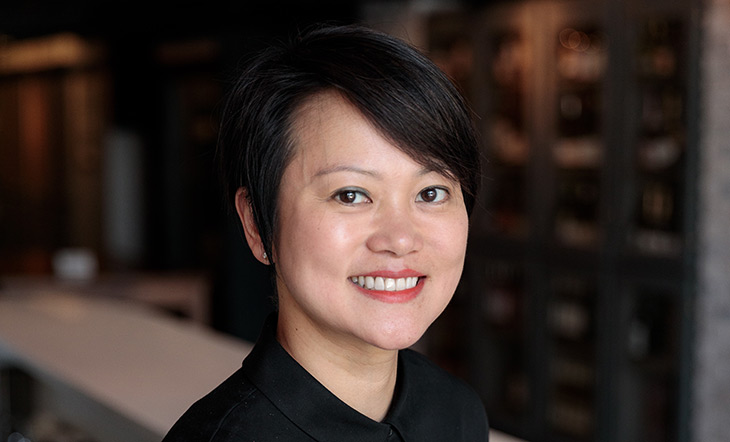