What to Do When the Deck Is Stacked

Access to capital in hospitality is an uneven playing field

Note: This piece was initially published in February 2020, before COVID-19 forced lockdowns across the country and fundamentally altered how food and beverage businesses operate day-to-day. But the structural barriers raised in this piece remain, and their impacts have been magnified by the pandemic, leading to exceptional challenges for marginalized communities, especially for Black and Indigenous Americans. Learn more about what these communities are facing and what you can do to support them through our Investment Fund.

When we say the James Beard Foundation is about good food for good, it’s not limited to sustainable agriculture, the Farm Bill, or reducing food waste. Another important aspect of our mission is highlighting the myriad hands that are helping to shape American cuisine. Below, Jackie Summers explores the barriers to entry for many chefs and aspiring business owners of color, and how a systemic lack of access to capital has consequences across an individual's entire career.

In 2017, famed food critic Pete Wells of the New York Times bemoaned the lack of diversity in restaurants. In his piece, entitled “A Wish List For New Restaurants,” he identified the core issue—unequal access to capitalization. “I find myself hoping for different restaurants, or restaurants run differently, by a wider and more diverse range of operators…What I see more and more,” Wells lamented “is the way power accrues to chefs who are already powerful, while independent restaurants struggle to get going. Most restaurants are funded by loans and private backers. I’d like to see the path to the top of the restaurant business cleared of the obstacles that make it difficult for women and minorities.”

This observation astutely sums up the lived experience of women and chefs of color working in restaurants. The hospitality industry is a microcosm of the society it serves, where marginalized people are grossly disadvantaged by financial institutions. The deck is often stacked against you, even if you have a track record.

Nowhere is this greater illustrated than in the case of Bravo Top Chef finalist and former co-host of The Chew, chef Carla Hall, who famously launched a Kickstarter to finance her restaurant Carla Hall’s Southern Kitchen in downtown Brooklyn. If a chef with that level of celebrity and gravitas isn’t being courted by financiers, what chance do up-and-coming chefs have?

Reality food television has reinforced this message, cultivating a mythological ideal of today’s modern chef as a white, male “rebel.” “I don’t have tattoo sleeves, a beard, and flannel shirts,” says chef Greg Collier of The Yolk, in Charlotte, North Carolina. “I’m not considered one of the ‘cool kids,’ so I’m not bankable. How on earth can you say I’m not cool? Out of all the things you can argue a black person can’t do, cooking ain’t one.”

Chef, author, and television personality Tanya Holland mirrors this sentiment. “I was recently on a panel with James Beard [Award] winner Michael Twitty on how difficult this is. My partners keep bringing in white males for management; for some reason that’s the gold standard. Investors want the assurance that there’s a male figure around.”

The problem has roots in the American plantation system: an agrarian economy which created great prosperity for a select few, while depriving its laborers of financial reward. “Black people were relied upon to build this country, but not to build their own businesses,” says chef Elle Simone Scott, food stylist for America’s Test Kitchen and founder of the women-of-color culinary mentoring network, SheChef. “We’re still seen as laborers, not owners.”

Without affluence and the access it provides, options are limited. “Generational wealth is not a card that was dealt to me,” says James Beard Award–winning chef Edouardo Jordan of Seattle’s June Baby and Salare. Fortunately, a handful of trailblazers, through a combination of unimpeachable skills, charisma, indefatigable work ethic, and hard-earned business acumen, are beginning to shatter long-standing systemic barriers.

“I was lucky,” says chef Jordan. “I got financing when my banker told me I had the best business plan he’d ever seen. When you don’t have someone holding the door open for you, you have to be able to do more than just cook. Your business skillset has to match your culinary skillset.”

This is its own conundrum. Financial literacy is not taught in public schools. Culinary schools are expensive, and so less readily available to the institutionally disadvantaged. “A lot of people have wonderful ideas for a business,” says chef Scott, “but they’ve never written a business plan, or done a P&L report. People who invest in business want assurance you’ll know what to do when they’re financed. You can get all the money in the world; you still need to be taught how to run a business.”

It also helps when traditional institutions acknowledge the work of talented women chefs and chefs of color, providing external validation you can (sometimes literally) take to the bank.

“James Beard, which honors outstanding chefs, restaurants, and restaurateurs in a number of categories in the U.S., does a great job of putting it in your face,” says chef Hill. The 2019 James Beard Awards reflected a shift in the culinary world, with 11 out of 16 of the major awards going to women, people of color, or both. “Anytime entrepreneurs are recognized by established organizations like James Beard,” says chef Hill Booker, “it’s a form of mentorship. They foster public awareness, ushering you into rooms you might not otherwise have access to.”

Despite some quantifiable progress, much work yet remains. “Lasting change is a painstakingly slow process,” says chef Jordan. “It’s not going to happen overnight. [People of color] still have to work harder and longer than everyone else to build a brand. We have a long way to go before banks and investors feel comfortable enough to underwrite minorities.”

The unconscious biases that impede equal access to capitalization have been centuries in the making and will not be easily undone. Systems of disenfranchisement are deeply ingrained and evolving, requiring a perpetually shifting conversation. It requires work to forge new pathways, to reach out to diverse audiences, to expand bandwidths beyond what is comfortable and familiar.

However difficult, it is worthwhile.

Greater access to capitalization for women and people of color in the restaurant industry won’t just cure Pete Wells’s malaise for exciting new restaurants. It will generate new revenue streams while whittling away at systemic oppression. 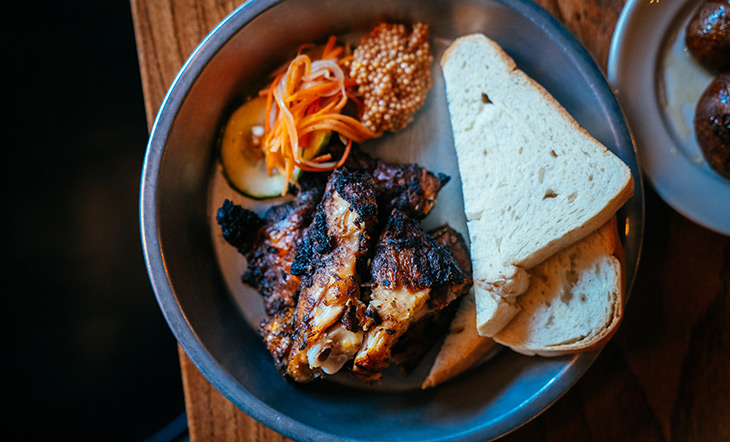 6 Businesses That Are Giving Back to Their Communities