Why Food Sovereignty Is A Human Right

When we say the James Beard Foundation is about good food for good, it’s not limited to sustainable agriculture, the Farm Bill, or reducing food waste. Another important aspect of our mission is highlighting the myriad hands that are helping to shape American cuisine. Below, James Beard Foundation director of culinary community initiatives Colleen Vincent explores the expanding and evolving food sovereignty movement in the U.S., and reports back from two conferences held over the summer that gave Indigenous and Black communities opportunities to share knowledge and build networks in their efforts to restore land rights.

“Our food comes from the earth, from the soil, from the land.  And if we don’t own any and we don’t control any of it, we don’t really have a voice in the food system.”—James Beard Leadership Award Winner Leah Penniman

Over the last couple of years, the media, educators, and activists have intensified their focus on raising awareness around the decimation and marginalization of Black and Indigenous farmers in America. According to Modern Farmer, “by the turn of the 20th century, former slaves and their descendants had amassed 14 million acres of land. Black agriculture was a powerhouse; per capita there were more black farmers than white farmers. But by the turn of the 21st century, 90 percent of that land was lost.”

The systems that contributed to this dramatic land loss have been in place since Indigenous Americans were forced to give up their rights to hunt and farm on their tribal lands in the 1800s.

Efforts to restore tribal farmlands and support and finance a return to farming by Black and Indigenous Americans are also gaining traction: the Food Sovereignty Summit and the Federation of Southern Cooperatives are two entities working to restore land rights. They are also at the center of the greater land and food sovereignty movement.

Both Indigenous Americans and African Americans have experienced land seizure and food apartheid as tools of injustice. In large part because of that history, these groups use land and food sovereignty initiatives as methods to support and uplift their communities while creating sustainable food systems. Sovereignty movements are far from new in America, but as systems changed due to commercial agriculture, climate change, and urbanization, they have become ever more critical.

The Native American community is working across tribal affiliations throughout North America to share knowledge and strategies around food and seed sovereignty. Earlier this fall, advocates gathered for the annual Food Sovereignty Summit organized by the First Nations Development Institute (FNDI). This year’s summit, hosted by the Oneida Nation in Green Bay, Wisconsin, took place in September.

Now in its sixth year, the summit focuses on multiple areas, including the promotion of Native foods that support health and strengthen tribal and community institutions. “The history of First Nations is very simple. It was created to be an advocate for Indian people,” explained Thomas Vigil, a member of the Jicarilla Apace/Jemez Pueblo people, and former chairman of the FNDI board.

Along parallel lines, the African American community has long championed land sovereignty as a significant path to freedom. The Federation of Southern Cooperatives (FSC), founded in 1967, came out of the Civil Rights Movement. As an effort to advance Black economic autonomy during this tumultuous time, cooperatives across nine Southern states came together to form what is known as “the Federation.”

“You had a lot of Black farmers and landowners who experienced a lot of racism [and] formed cooperatives out of necessity,” said James Beard Leadership Award winner Cornelius Blanding, executive director of the Federation of Southern Cooperatives. The personal and economic freedom engendered by Black land ownership and farming gave force to the overall fight for full constitutional rights. As farmers and communities advocated for Civil Rights, they faced aggressive retaliation from bigoted business owners, including harassment and denial of services, credit, and supplies. Farming cooperatives allowed Black farmers to share resources with one another and feed their communities in the face of discrimination.

The Federation is still in operation, hosting its 52nd Annual Meeting this past August in Epes, Alabama. The organization continues to advocate and support Black farmers, landowners, and rural communities in the face of tremendous land loss. Denied the promise of “40 acres and a mule,” land sovereignty has remained a key element in the ongoing struggle for equality.

The Federation’s commitment “to save, protect, and expand the landholdings of Black family farms” are supported by their Rural Training and Research Center and Agroforestry Center in Epes, as well as their advocacy for policies that benefit these farmers and low-income rural communities.

Conferences like those organized by the FNDI and the Federation are more than information sessions—they give attendees the network and tools, like policies and programs, to support their own communities.

This type of education and activism is making a difference: in 2016 the U.S. Department of Agriculture expanded farm loans for Native Americans farming and ranching on tribal lands, and the most recent Farm Bill included provisions to help clarify and restore land titles for Black and African-American farm families. These steps wouldn’t have been possible without the work of land sovereignty activists and organizations.

Native Americans were the earliest caretakers of North American lands, and African Americans were longtime stewards through slavery and beyond. This lengthy history means these groups have long understood the power of food and the soil that surrounds it. Healthy food feeds the people now and sustainable land fuels generations to come. Food and land sovereignty build resilience in challenging times and remain a vital part of preserving history, heritage, and culture. 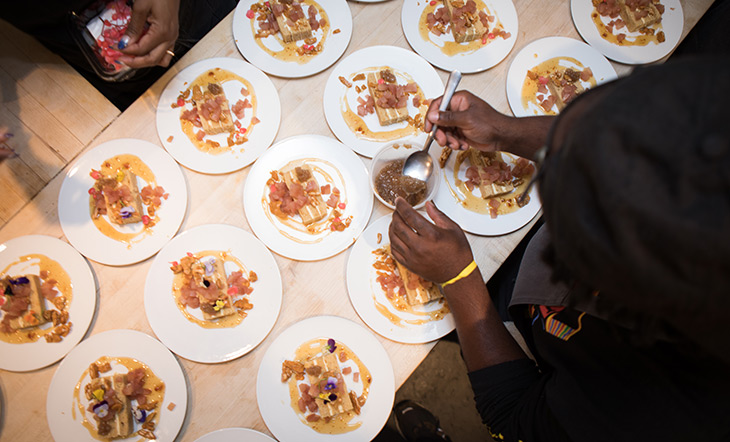 There’s A Lot to Learn Through Our Black History Series